Home / LIFESTYLE / REVIEWS > / FILM REVIEWS / App inventor Ben (a superb Seth Rogen) is not the first Greenbaum to land in a pickle in this uneven generational social satire. 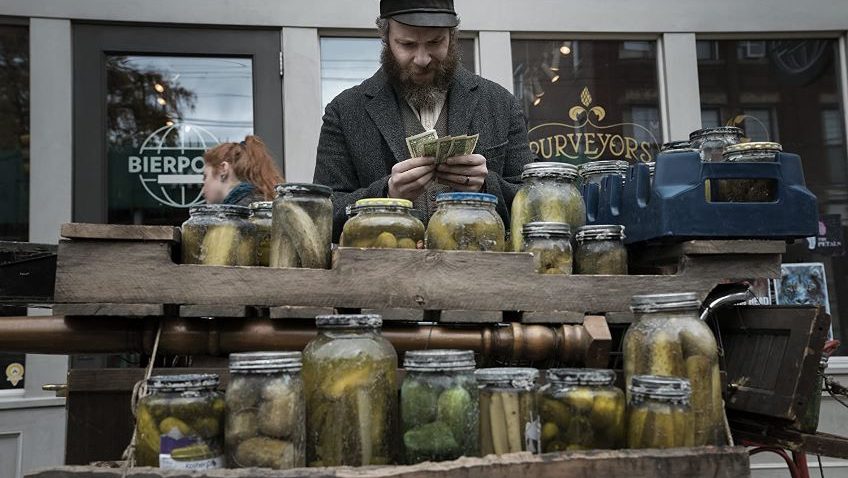 App inventor Ben (a superb Seth Rogen) is not the first Greenbaum to land in a pickle in this uneven generational social satire.

Knocked Up, Funny People, Superbad, Pineapple Express, The Green Hornet, This Is the End and The Interview are some of the successful films we associate with Seth Rogen, often seen in an ensemble cast of zany, often gross out, American comedy. With An American Pickle, Rogen, 38, who co-wrote and co-produced most of the aforementioned films and directed the last two, hands over the writing (to Simon Rich) and directing (to Brandon Trost) in order to play both warring Jewish relatives in a two-hander. Rogen is terrific in both roles, but An American Pickle goes off in too many directions, proving there can be too much of a good thing.

Adapted by Simon Rich from his 2013 New Yorker novella Sell Out, An American Pickle stars Rogen as Herschel Greenbaum, a beleaguered ditch digger in the town of Schlupsk somewhere in Eastern Europe, a target for marauding Cossacks. When he meets his true love, Sarah, (Sarah Snook) in 1919, they emigrate to America where Sarah reveals she is pregnant, and Herschel gets a job in a pickle factory.

The American dream, however, takes a century to materialise in this parable, and when it does, is clouded in nightmares. One day, while working at his factory job, Herschel, who is in his late thirties, falls into a vat of pickles. A miracle occurs because the brine preserves him in a mummified state from which he emerges, still bearded, in peasant clothes and with a strong Yiddish accent, in present day Brooklyn.

This is where An American Pickle becomes a tragic story of loss and rediscovery, and a fish-out-of-water comedy. Naturally, his beloved Sarah and the son he never knew are long dead, and, worse, are buried under a Russian vodka sign, land that Herschel vows to reclaim.

Marrying the story of loss with the fish-out-of-water comedy is challenging enough, but the film becomes a coming-of-age story, too, when Herschel begins to clash with his only living relative, grandson Ben Greenbaum (Rogen). In Rich’s story, Ben has a partner and is a well-off scriptwriter, but here, more mileage is gained from Ben being a single, nerdy freelance computer coder and App inventor. (Perhaps, too, setting another fantasy comedy about strained relationships in the show business world would be too reminiscent of This is the End).

The fish-out-of-water story is the more familiar and welcome, and the filmmakers make the most of it, showing how current trends for natural food, Brooklyn’s thriving foodie culture, internships (slave labour) and social media help Herschel build a pickle empire after foraging through a restaurant’s waste bin.

Whereas Herschel is bombastic, politically incorrect, crude, aggressive, and obsessed with his Jewish roots and family, Ben is unassuming, polite, hospitable, overly cautious and has abandoned his Jewish legacy.

Ben is, in his way, a time capsule, too, but the filmmakers fail to capitalise on this nature-vs-nurture conundrum to give the film a better focus. Herschel is a victim of a more simple, tribal past in which survival required different traits, but Ben is a victim of his time, too. He offers trendy kombucha tea and pea milk, dancing with his grandfather to Stay, the revived, 60-year-old hit by Maurice Williams and the Zodiacs, inventing an App for ethnically minded consumers and delaying its sale over concerns with the logo.

While Ben is a surprisingly patient and accommodating host to his grandfather, the cosy relationship ends when Herschel’s temper scuppers Ben’s deal to sell the App, turning his 5-year investment into a criminal record.

The two separate, but only physically, as they become entwined in a family feud of one-upmanship that you do not have to be Jewish to appreciate. To Ben’s horror, Herschel’s Neanderthal ways, outspoken opinions and flair for entrepreneurship unencumbered by rules and regulations, turn him into a media darling as sales of the pickles soar. Ben sinks further into bitterness, hatching revenge plots to undermine Herschel’s success by predicting his foibles and exploiting them on social media.

With the feud, the film becomes a social satire and it is not difficult to see Herschel as a Trumpian figure circa 2016 as his “straight talking” that repulses some, builds a following with others. This feud grows tiresome, however, because while occasionally clever and perceptive, it is not very subtle and seldom funny. A sentimental trip to East Europe feels tacked on and unnecessary.

If the film loses its focus by trying to cover too many themes and genres, what comes through in a touching way is a story about the curse and the blessing of family ties. Ben might well represent today’s lapsed Jews, but Ben’s loneliness (he has no other relatives, no girlfriend, no male friends or social ties that we know of) make him even more vulnerable than Herschel. Ben’s need of this connectivity is at the heart of the film, but is neglected until it surfaces, perhaps too late to feel intrinsic, at the end.

You can also read our review of This Is The End by clicking here.