Home / LIFESTYLE / REVIEWS > / FILM REVIEWS / A Sci-fi comedy spoof set in Hollywood that is too self-regarding for its own good. 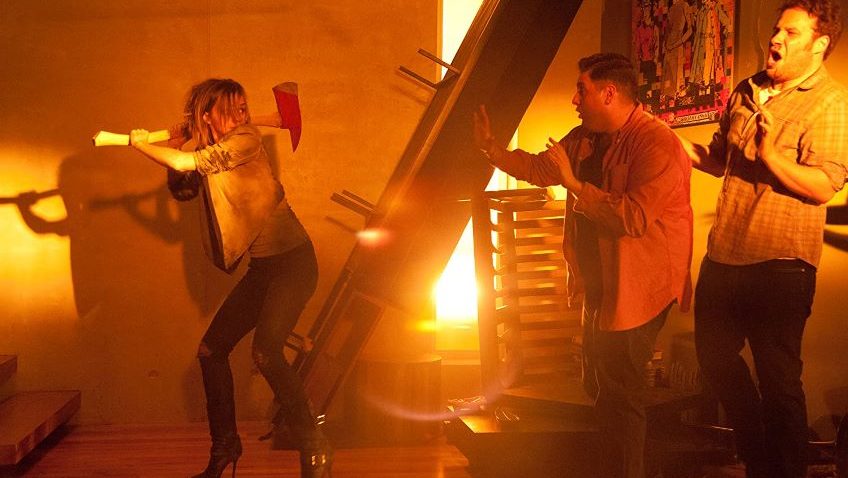 A Sci-fi comedy spoof set in Hollywood that is too self-regarding for its own good.

If you have not seen the films written by Evan Goldberg and/or Seth Rogen then you will not find much to laugh at in This is the End, which the pair co-wrote, co-produced and co-directed. That’s because This is the End features the stars of their films playing “themselves” in a send up of both their screen personae, and of Sci-Fi-disaster movies. Even viewers in the know might find the whole thing inane, but to be fair, the first hour has more great comic acting than you might expect. It is just after the half way mark – when a miscast Emma Watson believes the party guests want to rape her– that the film becomes more silly and tiresome than entertaining.

The novelty at the heart of This is the End is that, with the exception of Michael Cera, the actors are playing themselves in their L.A. surroundings, precisely as the public imagines them to be from their films. This creates the novel situation where the familiar cast members are still acting, but with their real names.

The films Rogen and Goldberg have written together include Superbad, Goon, The Green Hornet, The Watch, and Pineapple Express, although the references and in-jokes extend beyond these films to others in which the actors appear. In fact, This is the End is a much longer and more expensive version of Evan Goldberg’s (2007) short film, Jay and Seth versus the Apocalypse and a good way to get mileage out of our celebrity culture.

Instead of the two friends battling it out in a room as in Jay and Seth versus the Apocalypse, six friends face the end of the world in a L.A. mansion. Rogen drags Jay Baruchel (Knocked Up, Tropic of Thunder) to a housewarming party at James Franco’s new high- tec digs. Baruchel, feeling out of place, does not want to be there and complains, “James Franco doesn’t even know my name!” Rogen reassures him, but in fact, Franco does not remember his name. And when Baruchel sees that Franco has immortalised his friendship with Rogen with art on his walls, he withdraws.

Everyone who is anyone is present: taking drugs, drinking, having sex and talking. When a big earthquake strikes, turning the city into an inferno, destroying some of Franco’s house and leaving a deadly crater in front of it, you would think the petty rivalries would be forgotten, but you would be wrong.

For most of the remainder of the film, the surviving six friends (Franco, Baruchel, Rogen, Danny McBride, Craig Robinson and Jonah Hill) must figure out how to survive their internal feuds, while fighting off what seems to be an alien invasion.

The jokes are delivered smoothly with the expertise of seasoned pros. As you would expect, jokes about actors abound. When an actor points out “We work really hard”, another pops up with, “Yeah, like pretending it’s hot when it’s cold,” a wink to adoring fans. When the friends take inventory to see what can help them survive, they find a camera from 27 Hours (Danny Boyle’s Sci-Fi apocalyptic film starring Franco). Franco instinctively changes it to, 127 Hours although in the circumstances of a disaster, it hardly makes a difference.

To pass the time the guests film a home-sequel to the successful Pineapple Express. To the suggestion, “we should do sequels to more of our movies”, Franco squeamishly retorts, “Could we not do Your Highness?” referring to an embarrassing flop starring Franco and Danny McBride by the director of Pineapple Express. One of the best and most self-aware jokes comes at the end, when they are in shortest supply. With Franco’s new house collapsing, the friends all pile into Franco’s car to go to Franco’s other house in Malibu to chill out.

For the most part, though, the funny part of the film seems to end with the arrival of Emma Watson when Rogen, protective of their scarce food supply, points out: “She’s British. She’s used to crappy food. So why don’t we just give her all the crappy food?” That is funny coming from the land of McDonalds and Kentucky Fried Chicken, but too much of the comedy is misjudged. Danny McBride’s tantrums fall flat and the monster chase sequences lack humour or tension, without leading anywhere. A mock religious turn in the final third is tedious and silly, as the survivors (unconvincingly) come to believe that by self-sacrifice and other good deeds, they will go to heaven and be saved.