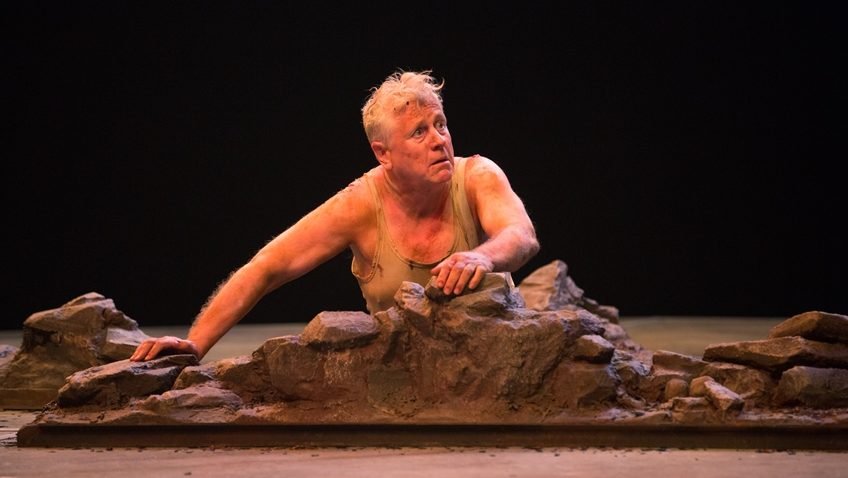 TIMON OF ATHENS is a cynical satire on a hypocritical, money-grabbing society living beyond its means on borrowed credit.

I think I am right in saying the only famous person who has ever liked Shakespeare’s play was Karl Marx. The sentiments Timon expresses on the corrupting power of gold had a special appeal for him.

The play is rarely revived; but the one thing you can expect to be said every time it is, is how apposite it is to the present times. And the productions which have worked best are those which have been set in modern times.

Two of the best stagings I have seen have both been performed in The Stratford Festival Theatre in Stratford, Ontario, Canada.

The first was directed by Michael Langham with John Colicus as Timon and the production, full of witty touches, was seen briefly at Chichester Festival Theatre in Sussex in 1964.

The second is directed by Stephen Ouimette with Joseph Ziegler as Timon, which premiered in 2017 and can now be seen on line.

Ouimette’s modern dress production is lucid and the rambling last act which can be very boring is not boring at all.

The acting standard is high throughout.

Timon is described as noble and good, undone by his goodness; but his goodness is evilly bestowed. He buys the friendship of parasites and flatterers with lavish banquets and expensive presents.

His ostentatiously extravagant and indiscriminate generosity is absurd and finally it ruins him.

He thinks he is wealthy in his friends; but he is loved only for his money and when he has none, his friends desert him in droves.

The scene everybody remembers is when Timon invites the parasites to a final banquet and offers them bowls of steaming water, which he then flings in their faces.

He retreats to the wilderness where he launches into mad King Lear-like tirades, cursing man’s ingratitude.

The supreme irony is that the middle of all the bitter invective against gold he finds more gold and soon prostitutes, robbers, soldiers and senators are knocking at his cave.

Timon of Athens is a one-man play. It’s a great role for a great actor but few great actors have wanted to play him.

Joseph Ziegler’s transition from mildness to wildness, from blazing phoenix to naked gull, is striking. He holds the play together and carries off the difficult last act.

Ziegler and Ben Carlson (as the churlish Apemantus, a professional cynic) have a great slanging match when they compete with each other to see which of them is the most misanthropic.

You can watch the production by clicking here.