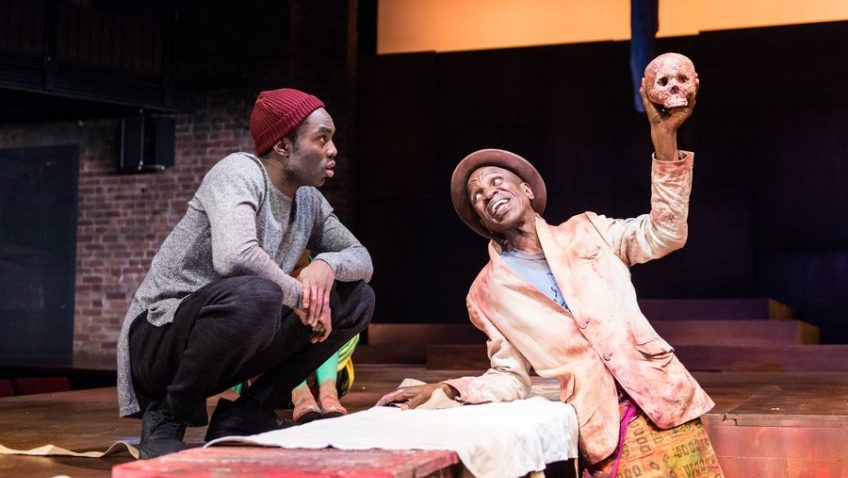 You can see Shakespeare’s Hamlet on line for free

Simon Godwin’s production with Paapa Essiedu in 2016 was a landmark in the history of the Royal Shakespeare Company. It was the first time a black actor had played Hamlet at Stratford-upon-Avon.

Essiedu’s performance, intelligent and articulate, has been highly praised in the UK and USA and rightly so

Hamlet, who has just graduated from Wittenberg University, returns to his royal home in West Africa to learn from a very reliable source that his uncle, who married his mother two months after his father’s death, had in fact murdered his father. The reliable source is the Ghost of his dead father.

The production’s most African moment is the appearance of the Ghost in full tribal clothes summoned accompanied by a drum beat, which gives the whole encounter, a voodoo feeling

When Hamlet says he is going to pretend to be mad he takes on the guise of a graffiti artist and messes up the whole palace with hideous art work. His face, his body and his clothes are covered in paint. He damages a framed royal portrait and converts the royal throne into a double lavatory seat.

However, his encounters, first with Ophelia (Natalie Simpson) and then with his mother (Tanya Moodie) are so wild his raging madness ceases to be fake and becomes real and nasty.

Marcus Griffiths is a charismatic Laertes, a man of action, who is quick to revenge and does not procrastinate. The climatic fight between him and Hamlet is fought bare-chested and in silk trousers and with staves not swords.

The cast is essentially a black ensemble. The only white characters are Hamlet’s mates from University, Rosencrantz and Guildenstern; and Guildenstern has had a change of sex and is now a woman.

NB. There are five more RSC productions of Shakespeare for free on BBC iPlayer: Macbeth, Romeo and Juliet, Much Ado About Nothing, Othello and The Merchant of Venice.

On a lighter note and good for a laugh, do watch the RSC finding new ways to say “To be or not to be is the question”: This can be accessed by clicking this link.