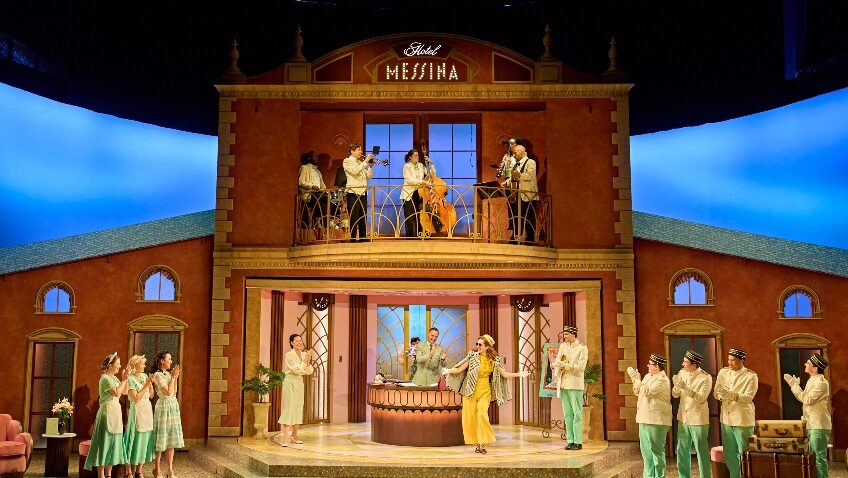 Simon Godwin’s production of Much Ado About Nothing is set in the 1930’s in a hotel on the Messina Riviera. A swing band gives Shakespeare’s play a potentially screwball musical comedy context. Unfortunately, the cast does not have the 1930’s celebrities or personalities to make this approach to the text work properly.

There are two parts to the play: firstly, there is the merry war between Beatrice and Benedict, the raison d’etre for the play’s popularity and constant revival. Then, there is Claudio, the groom, who, on his wedding day, as the church service is about to begin, accuses his bride, Hero, of being a whore.

Katherine Parkinson is miscast. John Heffernan is okayish on his own. Together they lack the vivacity and chemistry their skirmishes need. There are two scenes when they are gulled into believing the other adores them: one is in prose for Benedict, the other in verse for Beatrice. Both are played here for farce when there should be a contrast between the two. And the farce is just not funny enough.

The production does pick up fractionally following the wedding fiasco. The cast is happier with the seriousness rather than the comedy.

The comic success is David Flynn as Dogberry, the former police constable who is now head of the hotel’s security. Flynn’s performance is modelled on Ricky Gervais’s David Brent in the TV series, The Office.

Ewan Miller is so good as Conrade, the villain’s aide de camp, that you wish he had more to do.