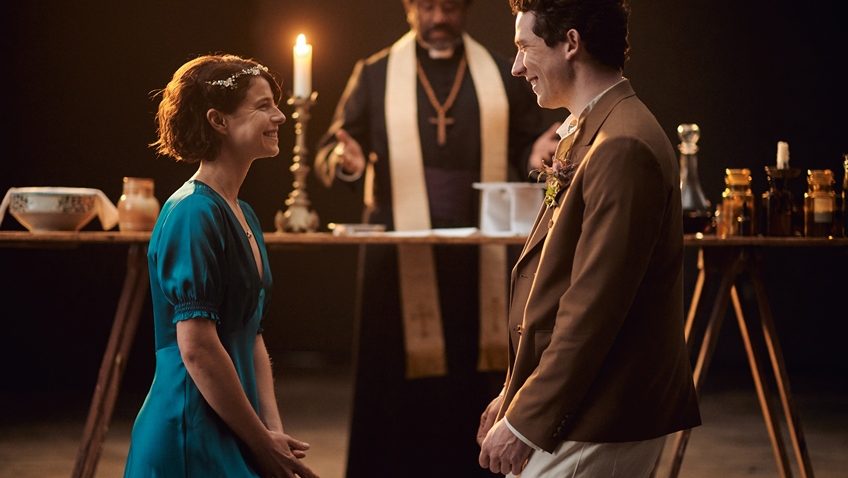 ROMEO AND JULIET was all set to go into rehearsal and open at The National Theatre in 2020 when Covid-19 closed all theatres. The National, very bravely, decided to go ahead with a hybrid version. Shakespeare’s two-hour tragedy was cut to 90 minutes and filmed over 17 days in the empty theatre, on stage and backstage.

Those, who already know the play, will be interested to see what director Simon Godwin and his actors have done with it. Those seeing the play for the first time may be in difficulties. I felt I was watching extracts from Shakespeare’s tragedy, an extended trailer, too superficial to be emotionally involving.

Josh O’Connor is a likeable, modest, wistful Romeo, a smile always about to break. Jessie Buckley is a feisty Juliet, a much stronger character, far more mature. No child-bride, she sits on her bed, taking her poison, surrounded by the rest of the cast, a blurred image, as if they are all in her mind

Tybalt (David Judge) actually catches Mercutio (Fisayo Akinade) and Benvolio (Shubham Saraf) kissing each other, proof enough for him that they do consort. There is no apothecary in this version so Romeo has to steal a vial of poison from Friar Lawrence (Lucian Msamati).

Deborah Findlay, softly spoken, is a simple-minded Nurse with not a hint of vulgarity Tamsin Grieg’s icy cold and nasty Lady Capulet is the Cruella de Vil of mothers.

Given that this production was filmed during a global pandemic, it is interesting to remember that, if there had not been a plague in Renaissance Italy, there would have been no tragedy. Romeo and Juliet would be alive and the enormous waste of money spent on a kitschy memorial gold statue would have been saved.

The plague stops Friar Lawrence’s letter to Romeo, telling him that Juliet is drugged, not dead, from being delivered. The messenger is caught up in a lockdown. The irony. A plague on both your houses!

You can watch The National Theatre’s Romeo and Juliet on Sky Arts on Thursday 8 April.