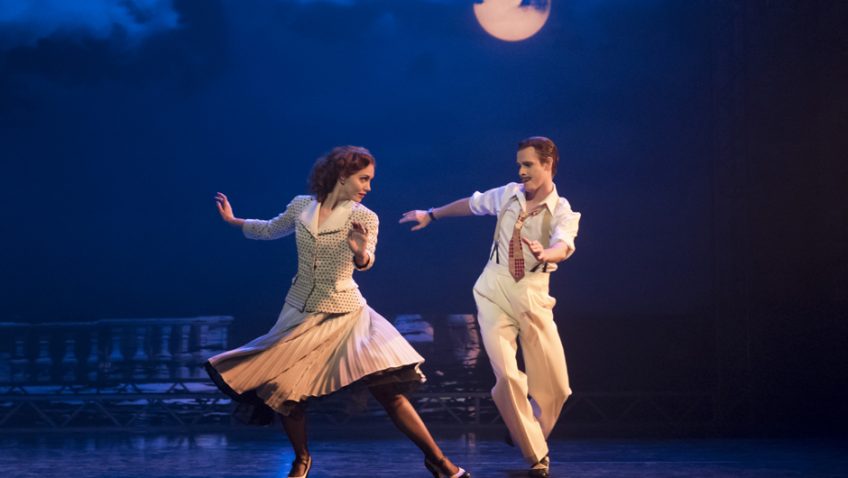 Matthew Bourne has long had the ambition to bring The Red Shoes to the stage.

The original film by Michael Powell and Emeric Pressburger, which did wonders for ballet in 1948, making ballet accessible to non-ballet audiences. Two men, an impresario and a composer, love the same ballerina.  The impresario believes that no artist can be great if they are distracted by love. For him Art is all that matters.

The ballerina forced to make a choice between Love and Dance, chooses Death and throws herself in front of a train.

Moira Shearer was the ballerina. Anton Walbrook was the impresario. Marius Goring was the composer.

The film included a 20-minute ballet which was based on the Hans Christian Anderson 1845 fairy tale. The Red Shoes have a life of their own and do not allow the wearer to stop dancing.

Bourne jettisons Hans Christian Anderson and creates a new ballet with the dancers all in black.

He also has a new score. The music by Barnard Herrmann includes his film scores – Citizen Kane, The Ghost and Mrs Muir and Fahrenheit 51 – orchestrated by Terry Davies.

A scene on a Monte Carlo beach makes a nod towards Cocteau and Chanel’s Le Train Bleu and Branislava Nijinska’s Les Biches.

There is also an amusing recreation of Wilson and Kepple’s music hall act of sand dancers parodying Egyptian postures.

There is much for Bourne’s wide fan base to enjoy in Red Shoes but his version does not have the emotional power the film had.  Similarly, it is difficult for Sam Archer as impresario,

Ashley Shaw as ballerina and Dominic North as composer to have the impact the film stars had.

I did wonder when I first heard Bourne was going to stage Red Shoes if he would go back to the source material and tell the story of Diaghilev and Nijinsky.