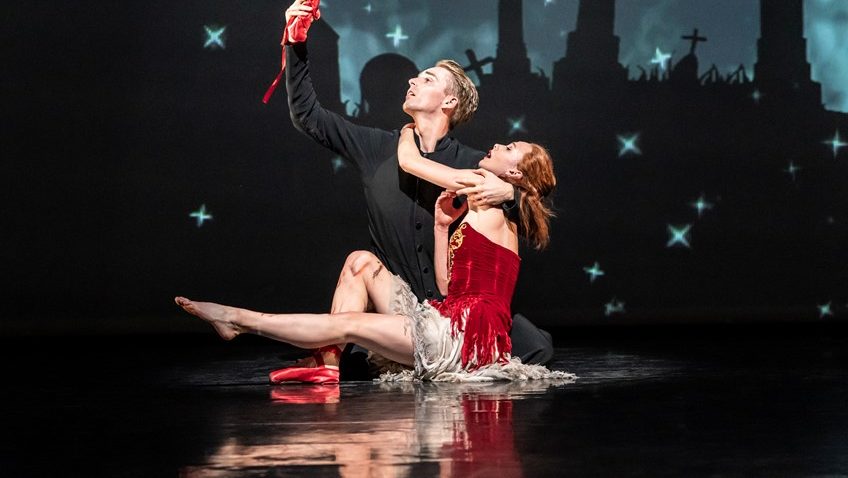 Matthew Bourne’s The Red Shoes – A ballet within a ballet

I can’t claim to be an afficionado of ballet at all. Indeed, in my 64 years on the planet I have never even seen a live ballet. But if Matthew Bourne’s The Red Shoes is anything to go by, then I have definitely been missing out.

The production is based on the 1948 film of the same name by Michael Powell and Emeric Pressburger, which is in turn based on Hans Christian Andersen’s 1845 fairytale. ‘It is in many ways’, says Bourne, ‘a personal love letter to a life in theatre and dance.’ But it is much more than that. It is a love letter to passion, ambition, and desire as the central character Victoria Page (danced in Bristol by Cordelia Braithwaite) is torn between love for a struggling composer, Julian Craster (Dominic North), the attentions of ballet impresarion Boris Lermontov (Glenn Graham) and her passion for dance.

Lez Brotherston’s brilliant set seems to at times dance with the cast as a great proscenium arch swings and glides to take us from front of stage to behind its curtain, from performance to rehearsal to backstage drama. Aided and abetted by Paule Constable’s superb lighting, and the beautifully romantic music of Hollywood composer Bernard Herrmann the show is a riot of colour and movement. And throughout Bourne’s direction shows us the inter-personal tensions of staging a ballet production with clarity and, it has to be said, a lot of humour as we follow Vicky Page’s journey.

At times, as a ballet first-timer, and also unfamiliar with the Christian Andersen tale, I became lost in this fast-moving ballet-within-a-ballet, not least at the sudden appearance stage left of dancers imitating Wilson and Keppel (alas without Betty) performing the famous sand dance. As bizarre as this scene seemed it was performed with perfect synchronicity and a certain amount of aplomb, but coming straight after a rehearsal scene of a Greek tragedy I couldn’t help but feel that we, the audience, had been thrust into the Spooky Mormon Hell Dream from Book of Mormon.

The 2016 production of The Red Shoes was a double Olivier Award winning smash hit. This 2020 revival has lost none of the vibrancy, imagination, or its enchantment. It’s clear that Matthew Bourne is still in love with theatre and dance, and has spilled his heart into this captivating production.