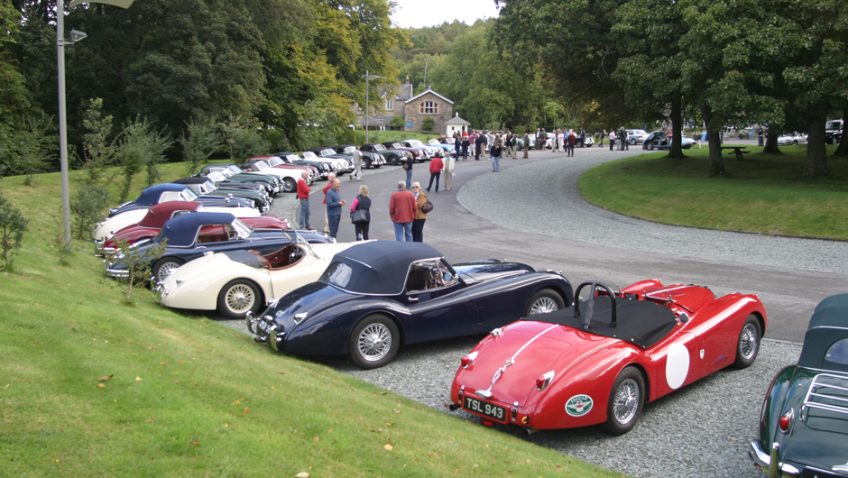 Participants in the Round Britain Coastal Drive (RBCD) will raise crucial awareness of prostate cancer, which kills more than 10,000 men in Britain every year. London-based XK Club member Patrick Hanratty, who will take part in all 18 stages of the RBCD in his British Racing Green XK 150 Drop Head Coupé, understands the importance of this more than most. Having recently come through bowel cancer, he is now being treated for prostate cancer, and will speak of his experiences after some group dinners during RBCD. Few men even know where their prostate gland is, so encouraging them to learn and check will save lives.

Long-time XK Club friend and supporter, the great Murray Walker OBE, will be flagging the cars away from the National Motor Museum at Beaulieu. Murray is an absolute legend in the world of motorsport, his fame extending far beyond the roar of engines and the squeal of tyres on a start-line.

Murray says ‘Though this is not a race, it sounds to me like a great event. I wish Philip Porter and the other crews a really enjoyable drive. May they be blessed with much publicity for this important cause. Go, Go, Go!’. He is a true enthusiast and an absolute gentleman.

The inaugural RBCD was driven by E-type Jaguars in September 2016 and raised more than £60,000 against a target of £50,000. It is hoped that the XK drive will beat even that success. ‘Our crews, our sponsors, our VIPs, my hard-working colleagues and the media all pulled together,’ states Philip Porter, founder of the drive and a survivor himself from prostate cancer. ‘It was very moving but also tremendous fun.’

‘I urge all XK owners to take part,’ says Porter, who completed the 2016 drive in his E-type, star of the film The Italian Job. ‘Not only will they be supporting a very important cause but, as I know from experience, the driving is absolutely superb. Our XKs were designed for driving and that, for many of us, is the real pleasure of ownership.

‘So, if you like driving, this tour is for you.’

With several drivers already committed to completing all 18 days and more than 120 cars taking part, the Jaguar XK Round Britain Coastal Drive looks set to be a triumph, in more ways than one. The International XK Club – formed in 1997 by motoring author and publisher Philip Porter and his wife Julie, the Club has members in over 50 countries and an exceptional magazine. With the emphasis on driving, the Club’s mantra is: no concours, no committees and no politics!