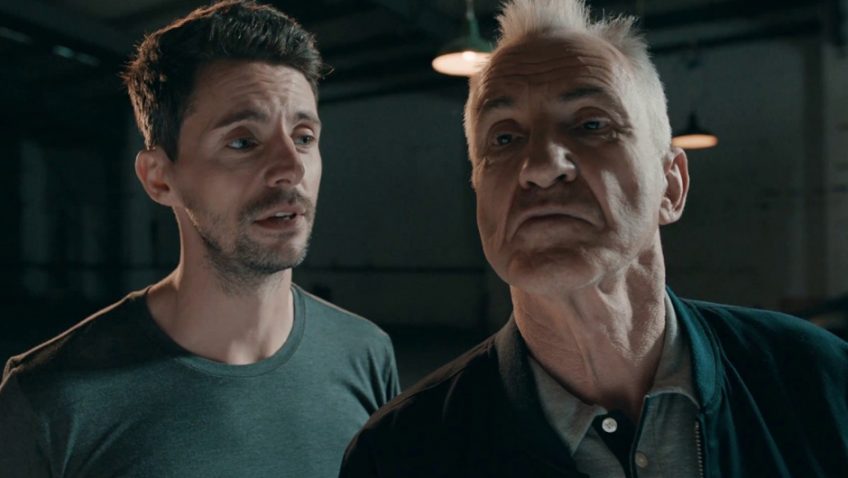 Great stories do not always make great movies. Sometimes they make good movies by the strength of the story alone. Taking place at Easter two years ago the headline-grabbing Hatton Garden heist, dubbed the crime of the century, might, under scrutiny, not even be a great story. It has not (yet) resulted in a good movie.

In the production notes, Producer Ben Jacques reflects: ‘the truth of the matter, when we read into the research, these boys came in, they did their job and they go away clean. There’s not much drama there.’ In fact, these ‘boys’, at least the four key players, were aged between 59 and 76. They were caught by their own sheer stupidity and sent to prison within a year. But in Ronnie Thompson’s The Hatton Garden Job

, there’s not much drama there, either.

One of the ways in which the imaginary Erzebet facilitates the operation is through an alleged former corrupt cop – or rather, former Detective Chief Inspector at Scotland Yard, Frank Baskin (Mark Harris).

If you can sit through the handler’s droning narration you will soon learn that he made invaluable contacts when inside on a previous job; contacts that paved the way to the Hatton Garden job when he emerged a free man.

The second difficulty in dramatising the heist is that the preparation took three years, and – in the film at least – is as uncinematic as the burglary itself. The preparation consists of boring conversations in XXX’s in a large empty room that is presumably XXX’s office. The filmmakers are proud that the one documented part of the caper – the drilling through thick concrete walls – is recreated in the film as authentically as possible, and the actors had to do the drilling.

You would, however, expect the crime of the century to have some tension. However, the many interruptions to the job, which is called off and on again twice, combined with the laboured editing and confusing camerawork cutting back and forth from the vault to external locations serve to reduce the tension down to nothing.

At the very least, it could have been shot like a Guy Ritchie movie (which it could have been) or, like the McCarthy-black-listed filmmaker Jules Dassin’s Rafifi of 1955. Rafifi is about an aging gangster, who, with three partners, plans what is thought to be an ‘impossible’ theft of an exclusive jewelry shop in central Paris.

If that sounds familiar, it should, as that is what 59-year-old Danny Jones (Phil Daniels); 76-year-old Brian Reader (Larry Lamb); 75-year-old wheelman Kenny Collins (Clive Russell) and 67-year-old Terry Perkins (David Calder) did. Just change Paris to London, and the jewelry store to the vault of the country’s large diamond centre.

Dassin, however, shoots his heist straight through, over 30 tense minutes of screen time, without dialogue or music. And unlike Thompson and his co-writers, Dean Lines and Ray Bogdanovich, Dassin lets his burglars’ humanity and personalities shine through. In The Hatton Garden Job

, we learn very little about the seven men involved in the heist and never see their home life. This is a shame as the acting of the four core seniors is good and it’s great to see these actors on the big screen.

Perhaps the filmmakers felt that their protagonists would be even less sympathetic if we knew about their long criminal records, which include some of the country’s biggest robberies. This marginalisation of character is, nonetheless surprising for the director of Tower Block, where the characters and their interaction are what distinguished the film.

But perhaps the most inexcusable omission is any reference to the victims. The heist has, it seems destroyed London’s historic and world renowned diamond/jewelry district and many honest families have lost their livelihoods, their businesses and their future. There were bad eggs in the mix, but this was not a victimless crime. Not once do the filmmakers acknowledge the presence of the victims.