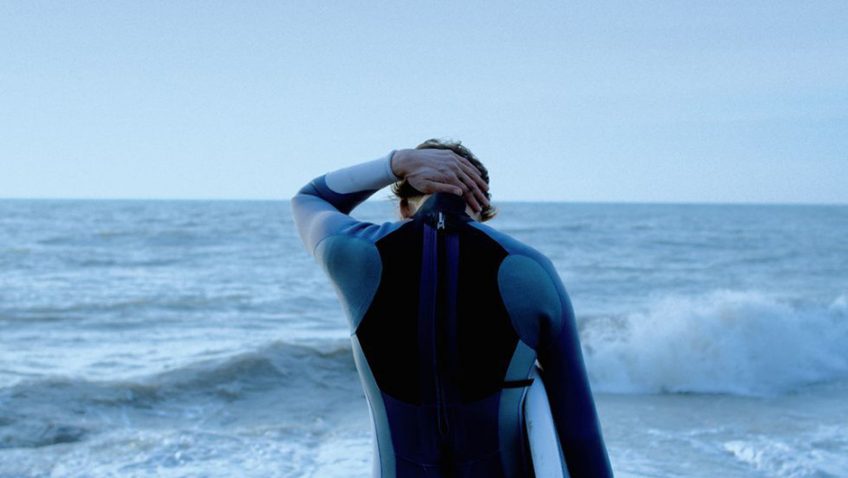 French writer/director Katell Quillévéré’s earlier feature films, Love Like Poison and Suzanne were subtle gems, and do not quite prepare you for Heal the Living: a visual and emotional tsunami, albeit weakened by a contrived second half. If the film, based on Maylis de Kerangal’s 2014 novel, sounds like a spiritual medical drama, it is, but what is more audacious, it is a procedural guide to organ donations and transplants. Sounds dry? You won’t see many dry eyes in the house.

If you are reluctant to weep at so obvious a ploy, Quillévéré has you on the edge of your seat, as she deftly transfers the race against the clock technique used in popcorn thrillers to a hospital setting and the outcome of a grief-stricken couple’s decision. But it is in the first fifteen minutes that the director’s visuals and suspenseful foreshadowing are so brilliant they could serve as a master class. Handsome, lean and athletic with a few stylish tattoos, 17-year-old Simon (Gabin Verdet) wakes up before dawn next to his pretty girlfriend Juliette (Galatea Bellugi) and slips out the bedroom window after a last longing glance. We do not know where he is heading, but as he races his bicycle full speed through the deserted, winding streets of Le Havre, you half expect a car to emerge or some other catastrophe to befall him. Simon joins two friends for a drive to the beach where they change into wetsuits, and all becomes clear. With his long, blond hair, Simon looks every bit the surfer boy and Quillévéré’s regular cinematographer, Tom Harari, recreates the tension of the bike ride in an astonishingly visceral yet dreamlike surfing sequence, as Simon catches the perfect wave, and then seems to be going under.

But the next thing we know Simon is in the van with his friends returning from the beach, one of whom is driving it down an empty, straight motorway. Gradually, before our eyes, and those of the sleepy driver, the motorway begins to ripple until it transforms into the sea.

Disoriented and incredulous Simon’s mother, Marianne (Emmanuelle Seigner, excellent) rushes to the hospital. When she (and we) learn that the other two boys suffered minor injuries as they were wearing seat belts, it confirms the characterisation of Simon, a teenager with everything to live for who feels he is immortal. Although Marianne and her husband Vincent (Kool Shen) are separated they come together in grief and in the hope that their son, in a coma, will revive.

Here we leave the parents, just when we expect to accompany them into Simon’s room, and are instead introduced, in more depth, to the medical staff. First is the no-nonsense head surgeon, Dr Pierre Révol (Bouli Lanners), whom we had seen earlier dropping off his young child on his way to work. He is in consultation with the soft-spoken organ donation liaison, Thomas (Tahar Rahim, The Past, A Prophet), who, in a later scene explains to two nurses that he relaxes by listening to the singing of goldfinches on YouTube. (It is interesting that the three men responsible for a life-prolonging heart, Simon, Peter and Thomas, share names of three of the Apostles).

As we see throughout the film, Thomas is well suited to his job, an excruciatingly delicate balancing act. He must gauge the emotional strength of the family, nudging them along with patient compassion while keeping his eye on the narrow window of time he has to salvage precious organs from a body on life support.

Bouli Lanners and Tahar Rahim in Heal the Living

Overworked and stressed-out hospital staff are represented in the character of Jeanne (Monia Chokri), a nurse who has recently arrived at the hospital. She is reprimanded for talking to Simon as though he were alive in front of his parents, when it is imperative that they understand that he is brain dead. Révol sends the frazzled nurse out on a break, and in the lift, she has a sexual fantasy that is as real as the motorway filling up with the sea.

Quillévéré exhibits such confidence in drawing the line between the mawkish and emotionally cathartic, that she inserts a flashback scene showing how Simon and Juliet met and fell in love. Again, it shows Simon racing on his bicycle against the train that is carrying Juliette to the next station where he is waiting for her, out of breath, when she descends. In lesser hands this romantic scene, so full of young life, would have been exploitative, particularly after scenes in which Simon’s parents, initially dismissive of the idea of organ donation, grapple with their conscience over Thomas’s proposals.

After the “Simon” story we meet the recipient, Anne (Anne Dorval), a musician in forced retirement. Her failing heart prompts Anne to tie up loose ends, with her female lover, a beautiful concert pianist, and with one of her teenage sons, whom she fears is reluctant to admit to his mother that he is gay. Anne’s indecisiveness and fear of dying with things unsaid is more annoying than suspenseful, and the choice of family and the family dynamic feels more contrived than random.

Quillévéré is supported by one of the world’s busiest composers, Alexandre Desplat, who has been nominated for 8 Academy Awards and won one (The Grand Budapest Hotel). The music here enhances the emotion drive, without leading or insisting.

The medical scenes are not for the faint hearted, but the miracle of life-giving “creation” is never far from the clinical scenes. It is therefore fitting that the one of the final shots is of Simon, the sea-loving boy who did not fade, but suffered a sea-change, ‘into something rich and strange.’