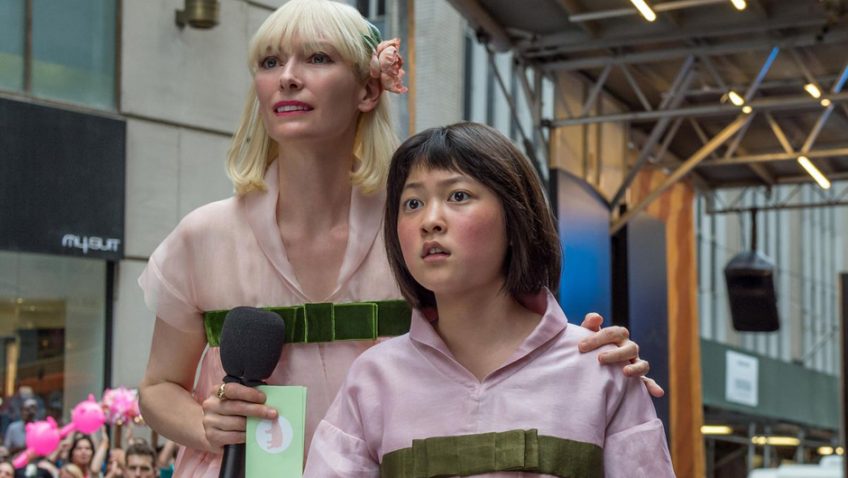 When it comes to pulling out all the stops, you have hand it to the South Korean film industry. They did it with the wild and wonderful 1999 crime comedy Attack the Gas Station and with the joyous spaghetti western, The Good the Bad and the Weird. Last year’s super-tense Train to Busan breathed new life into the Zombie genre while giving it a refreshingly South Korean social context. Now we have Bong Joon Ho’s (Memories of Murder) Okja. This mad, manic and thoroughly engrossing film takes on not only Black Beauty, Lassie Come Home, and other stories in which children are separated from their pets, but animal cruelty films like Black Fish, Free Willy, Chicken Run – and notably King Kong. In Bong’s The Host a man’s daughter is kidnapped by a river monster, the product of industrial waste dumping. In Okja, a CGI super pig with human emotions is kidnapped by an unethical GM food company. But Bong goes further, as though determined to put his film not only in the multiplexes but on the kind of television that young people watch. Netflix, the TV streaming company and alleged enemy of cinema, was the only company to give to Bong a cinema release and the budget he needed. Okja co-stars English speaking stars Tilda Swinton (who worked with Bong on Snowpiercer), Jake Gyllenhaal and Paul Dano and presents the scariest American slaughterhouse images since Upton Sinclair’s novel, The Jungle

Since she was four, 14-year-old Mija (Ahn Seo-hyun) has grown up with Okja, who is both her only friend, the mother she cannot remember and the sister she never had. Mija does remember when baby Okja arrived at the breathtakingly beautiful, remote mountain top farm which Mija shares with her grandfather. In a lovely sequence Bong builds up the emotional bond between the playmates that will put us squarely behind Mija when she resolves to risk her own life to save her friend.

Okja is not a human, however, but an experimental pig that was engineered by the Mirando Corporation to solve the world’s hunger problem with a tasty profit. Something has already gone amiss as Okja looks exactly like a Hippopotamus and not a pig. Though Okja is a CGI character, its expressive, brown, human eyes, trusting nature and heroism turn it into one of the most endearing CGI characters since ET.

CEO Lucy Mirando (Tilda Swinton) has engaged the services of energetic, hirsute zoologist and TV celebrity Dr Johnny Wilcox (an unrecognizable Jake Gyllenhaal). With his huge ego, he believes he is the face of the Mirando Corporation, but discovers he is no more than a pawn in Lucy’s game to con the FDA and the public. Hardly intimated by the braces on her super white teeth, the alabaster fashion plate aims to sideline her nasty twin sister’s (Swinton as well) authority.

But Lucy is surrounded by an equally duplicitous entourage and, in a satire of such companies we see that no one can be trusted. Lucy masterminds a multi-media Super Pig Competition in which 26 Super Pigs – which she claims are natural – will be sent to 26 nutrient-challenged parts of the globe to be reared in the wild. In ten years, Mirando Corporation will select the winner in a big festival to rival Macys’ Easter Parade. When Dr Johnny, and media relations guru Jennifer (Shirley Henderson), arrive at Mija’s mountain kingdom to transport the ten-year old pig to New York via Seoul, it takes Mija a little while to realise what is really going on. Instinctively, she grabs some loose change and her would-be dowry: a small solid gold pig that her remorseful grandfather gave her to make up for the loss of Okja.

The remainder of the film is a rollercoaster ride of action, suspense, emotions and adventure as Mija learns she is not the only one trying to save the pig. Alerted to the case by Mirando’s publicity machine is The Animal Liberation Front, headed by by-the-book Jay (Paul Dano, superb), professionally attired in a suit and tie. Jay explains to Mija through a well-meaning, but unreliable translator (Steven Yeun), that they need her permission to risk Okja’s life to get the evidence they need to destroy Mirando. The activists, who include the level-headed Red (Lily Collins), vary in their ideologies, but they challenge the negative image of militant animal rights groups with their organisational prowess, commitment to non-violence and real compassion.

Bong employs various creative ways of injecting emotion into his action sequences so that our investment in Mija and Okja never wanes. He stages a brilliantly edited and complex chase scene in a Seoul market, orchestrated to John Denver’s gushingly gorgeous Annie’s Song. Its lyrics ‘Let me give my life to you/Let me drown in your laughter/Let me die in your arms’ harks back to the sacrificial bond between Mija and Okja that we have already seen.

When Bong moves us to the murky, dystopic slaughterhouse, with its train tracks echoing the route to Auschwitz, the emotional charge that has propelled us thus far turns horrific and justifies the 15 certificate. The film is long, however. If its energy never wanes, Bong could have cut a few scenes featuring Gyllenhaal’s surprisingly self-indulgent performance.

As Lucy and her staff munch on tasty little sample hot dogs, cut from the flesh of the Super Pigs to test the market, Mija witnesses a helpless pig being squeezed inside an iron clamp and shot in the head, before falling to the blood soaked floor. Okja is next in the queue. Bong nevertheless leaves us with hope and defiance in a satisfying ending.