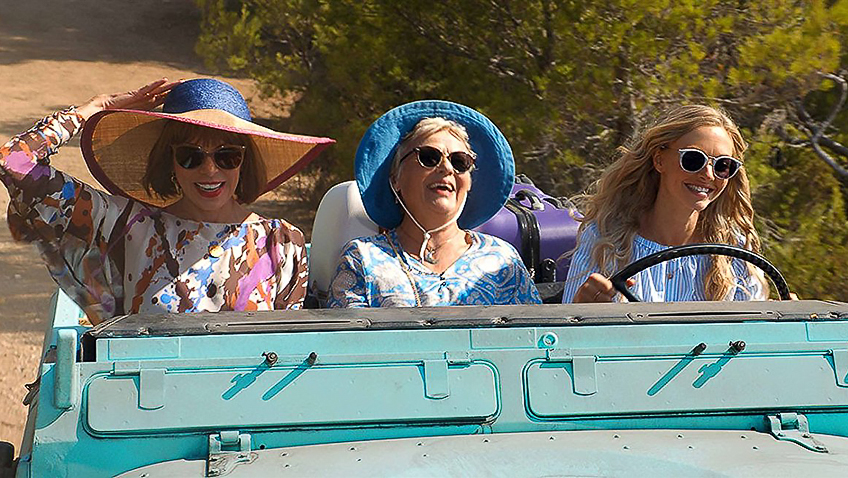 A superior sequel and the perfect antidote to Brexit blues

With the pressure on for films with female directors and writers, Mamma Mia! Here We Go Again

has replaced the original film’s female director Phyllida Lloyd (The Iron Lady, and female scriptwriter Catherine Johnson, (adapting her hit 2001 stage play) for director/scriptwriter Oliver ‘Ol’ Parker (The Best Exotic Marigold Hotel). When you consider that Lloyd and Johnson were the director and writer respectively of the 2001 stage musical on which the original 2008 film, Mamma Mia! was based and Parker has never directed a musical, the change seems foolhardy. But this is a superior sequel, whose effervescent, silly, joyful mood and choreographed performances of the Swedish pop group ABBA’s songs are so contagious that you overlook the fact that you are watching some savvy producers milking a big cash cow for all it is worth.

And feminists need not worry: women are the focus of this sequel, and in particular, mothers and daughters who might want to see this one together.

The story begins five years after the original ended, with the most significant change being (spoiler alert!) that Donna Sheridan (Meryl Streep) has been dead for a year. Her daughter Sophie (Amanda Seyfried) has honoured her mother’s memory by refurbishing Donna’s Greek island guest house (this time, shot on the Island of Vis in Croatia) and planning to run it. With preparations completed for a big party to mark the occasion, Sophie takes a break to talk to husband Sky (Dominic Cooper) who is working in New York and is tempted to accept a lucrative job there. When Sophie makes it known she cannot leave the island, the two burst out in song (One of Us).

Back in 1979, class valedictorian Donna (Lily James) starts with a speech, but soon bursts into song, too, whipping off her cap and gown to reveal a colourful, sexy dance costume underneath. I Kissed the Teacher, might be a lesser ABBA song, but it’s perfect here, as you can believe that quite a few teachers might have wanted to kiss this student. It establishes Donna as an irreverent, but always likeable, free-spirited and spontaneous beauty who attracts people like a magnate.

Back at the dorm that Donna shares with best friends Tanya (Jessica Keenan Wynn) and Rosie (Alexa Davies) she is hurt that her mother, Ruby, did not show up at the graduation and announces that she is not going home for a while. 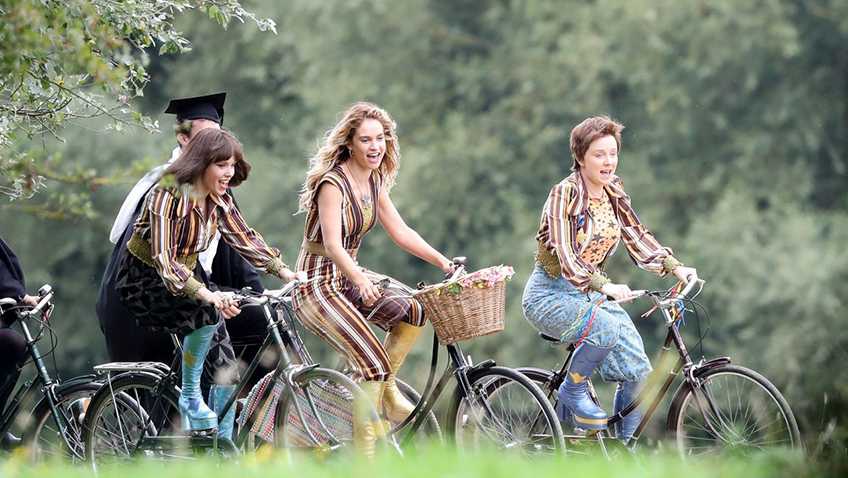 Arriving at her modest Parisian hotel, she meets banker’s son Harry (Hugh Skinner) slumming it and trying to explain in painful pigeon French that he’s locked himself out of his room. Within minutes of meeting Donna, he is in love and admits, ‘I’m already defeated.’ We all know what follows: a rousing song and dance rendition of ABBA’s Waterloo in a crowded French bistro. ABBA’s greatest hits from the original film are cleverly interspersed with their B-sides, but we’re never far from a song.

Back on the island, Sophie goes to talk with retired Sam Carmichael (Pierce Brosnan), Donna’s widower, and, Sophie believes, the only one of her three ‘dads’ who will be present at the party. In fact, we will see Harry Bright (Colin Firth) walk out of a high-stakes, 14-hour meeting in Tokyo; and Swedish sailor and travel writer Bill Anderson (Stellan Skarsgård) substitute his fat, clueless brother at a black-tie awards ceremony, so that they can sneak off to the party in Greece. 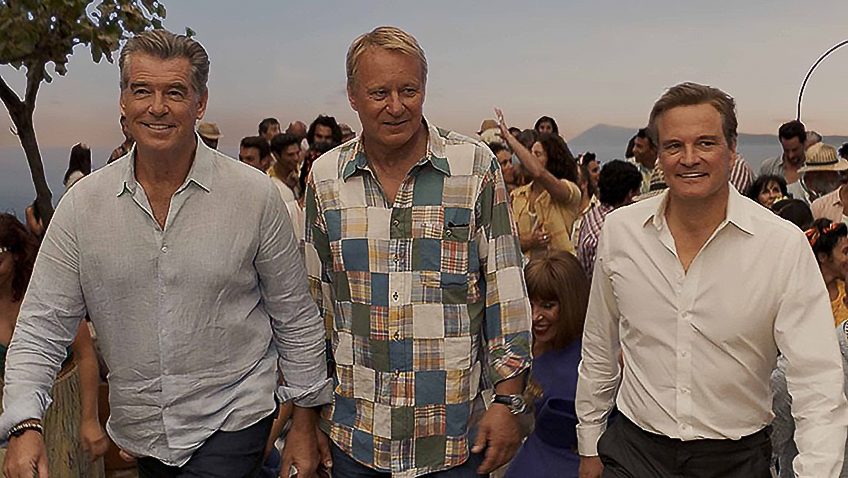 As Sophie reflects on how she misses her mother, and on her relationship with Sky, Tanya (Christine Baranski) and Rosie (Julie Walters), who, with Donna, formed the Dynamos, arrive by island ferry. They provide plenty of comic relief and if Rosie finally gets together with the man of her dreams, Tanya has the best one-liners.

Back in 1979 Donna is also arriving in Greece, only to miss her ferry thanks to a timeless customer’s inspector (Omid Djalili) who is compelled to comment on everyone’ s passport photo. He prefers Donna’s hair short as in the photo. When, later on in the film, it comes to Bill and Harry’s simultaneous arrival, he tells Bill that ‘time has been most unkind to you,’ referring to his hairline. Looking up at Harry, the famously handsome Firth, he comments, ‘as for you, age becomes you.’

When most people miss a ferry, it’s just plain inconvenient and boring. But not Donna, who starts flirting with Bill (Josh Dylan), a dashing Viking with an expensive yacht and nothing to do but escort Donna to her island paradise. 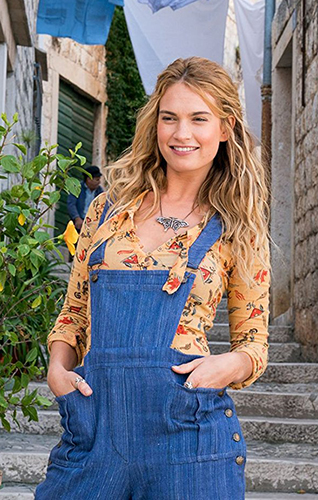 This is the pattern that Parker has devised to join the two stories, with Donna’s going forward, and Sophie’s looking back – at her mother’s life, as recalled by Tanya and Rosie. Sophie learns how her mother ended up singing with the Dynamos and how she met, and slept with Harry, Bill and Sam within days or weeks of one another.

The two stories join up with the arrival of two babies and one uninvited grandmother, Ruby (Cher age 72 to Streep’s 69). Cher’s entrance is one of those magical film moments where we are abruptly transported into a higher realm; time stops; and you forget where you are. Dressed in a stylish white trouser suit with her mane of white hair and perfected skin, the 73-year-old has come to patch things up with Sophie.

But there is also unfinished business in affairs of the heart for older women in this film. The hotel manager is Fernando Cienfuegos (Andy García), a name, Ruby comments, that is rare and one does not forget. This may be an ABBA songfest, but Fernando is Cher’s and her interpretation sends shivers down your spine.

In keeping with the possibility of love late in life, Parker saves one of the best scenes for last when Tanya sees a stranger across a crowded roof terrace and mumbles, ‘Oh I hope his wife is dead!’ It might sound distasteful, but this is exactly what many women over 60 do hope. In this case, the man, who happens to be Fernando’s older brother, approaches her and, without missing a beat, replies, ‘Alas she is.’

Lily James is terrific as young Donna and helps us understand the character played by Meryl Streep in the original. Her smile and energy are so infectious that everyone who meets her falls in love with her, including the Greek tavern owner and Donna’s landlady who lets the now pregnant Donna live rent free because Donna saved her horse in a violent storm. Here is a liberated woman who is living life on her terms and sticks to her dream.