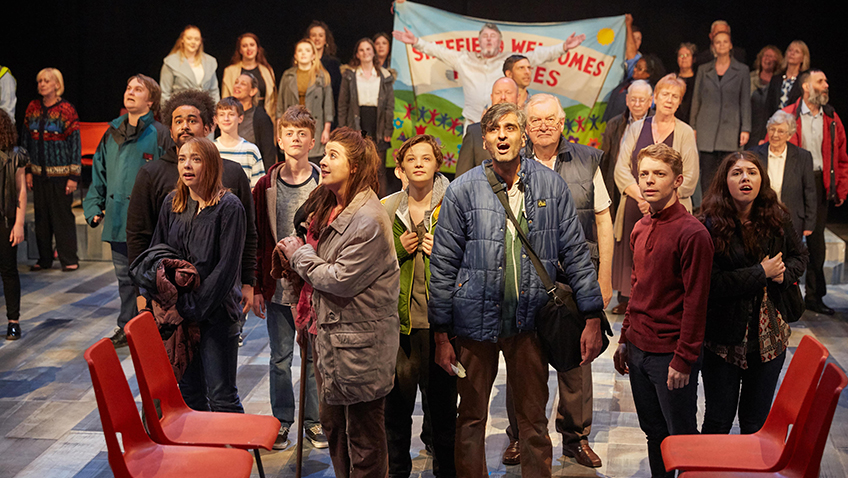 Clichéd and predictable but full of heart, charm and bubbling sparkle

A standing ovation followed the finale of Songs from the Seven Hills, a celebration of a city built on seven hills – not Rome, but Sheffield. With music and lyrics by Claire McKenzie and Scott Gilmour, John Hollingworth’s book is based upon his many, many interviews with Sheffield folk, some born and bred, some long-standing incomers and others who arrived more recently as refugees and asylum seekers to make Sheffield their new home. As we journey with these diverse individuals through their own struggles and defeats, we arrive, eventually, at their new beginnings and shared hopes for a better future.

Sheffield People’s Theatre productions are always large-scale affairs. There’s no celebrity this time, but with more than fifty in the cast, ranging from 12 years to 90, it’s definitely big. In fact, it proves somewhat bewilderingly, confusingly big for a good while, its disparate story strands and massed school production crowds making the search for meaningful focus quite a chore until main characters and situations fully emerge to properly engage before the end of the first act. 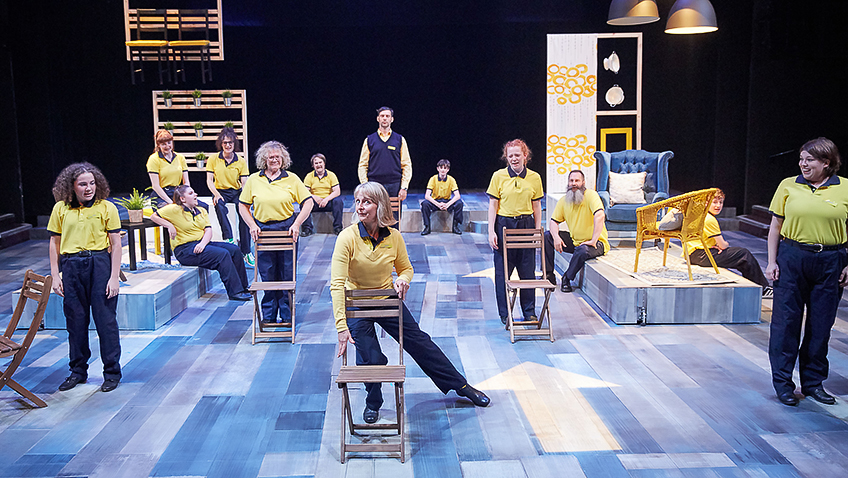 The Company of Songs from the Seven Hills

One benefit of a huge cast is that, with all hands on deck and well-oiled moves, elaborate set and prop changes can be smoothly achieved. Kevin Jenkins’ attractive, versatile woodblock bases are magnificently mobile, carrying people and entire rooms around the stage, transformed quickly from train, boat, church or living-room into community centre or Swedish furniture store.

We meet first a Syrian family fleeing war-torn Aleppo, huddled on the ground in blankets at a dark, desolate refugee camp. For a gruelling, perilous passage by boat, lorry and train to England, in addition to money, they hand over a precious family heirloom, a set of top quality Made in Sheffield cutlery (which doesn’t quite explain their Sheffield accents). At the camp, too, is something else from Sheffield – a ghost. Clad in chalky, crumpled shirt and trousers and dusty boots, walks and talks the narrator spirit of former steel worker and Welfare Club man, deceased car accident victim Gerald Shaw like the ghost of the steel industry itself, urging all to grasp their chances before it’s too late. 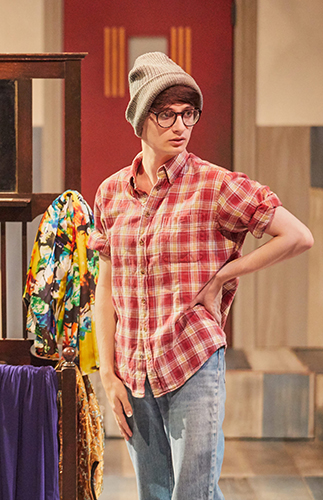 Tommi Bryson in Songs from the Seven Hills

Links established, we travel to Sheffield to meet Gerald’s grieving widow, Kaye, played with joyous delight by Liz Seneviratne moves forward with her life, and daughter Bex, devoted to running the Lighthouse Community Centre on the site of her dad’s former Welfare Club, a site now earmarked by a bribed mayor to be bulldozed for housing development. The corrupt mayor’s ill-used wife being a vicar, issues of divorce, custody and faith enter the mix while, meanwhile, Georgie Porter, brought wonderfully to life and song through the ever-engaging stage presence of Tommi Bryson, is battling for gender reassignment. Georgie also works as one of the colossal number of yellow-clad, disgruntled employees at a new, ‘out with old, in with the new’ Scandia furniture store, wheeled on for somewhat bizarre, humorous musical interludes. Welcomed into all this, enter the Syrians to struggle now for the right to remain, helped by kind people and a caring community.

As their stressful, complicated lives intertwine and Gerald’s ghost dims, fades and disappears, the themes of ‘life goes on’, of moving on to new, optimistic beginnings bring humour and song all the way, solos, duets and massed, rousing, big-harmony anthems, backed by a superb, beautifully directed band of eight players. One striking song, beautifully enacted, tells of the Monarch butterfly’s legendary flight from Canada to its new, perfect home in Mexico, proving its worth the risk.

As the show celebrates the rich diversity of what it means to be Made in Sheffield, friendly, welcoming City of Steel, the strands may be vast and disparate, often inelegantly linked, and rather clichéd and predictable, but it’s a show that’s full of heart, charm and the bubbling sparkle of life.