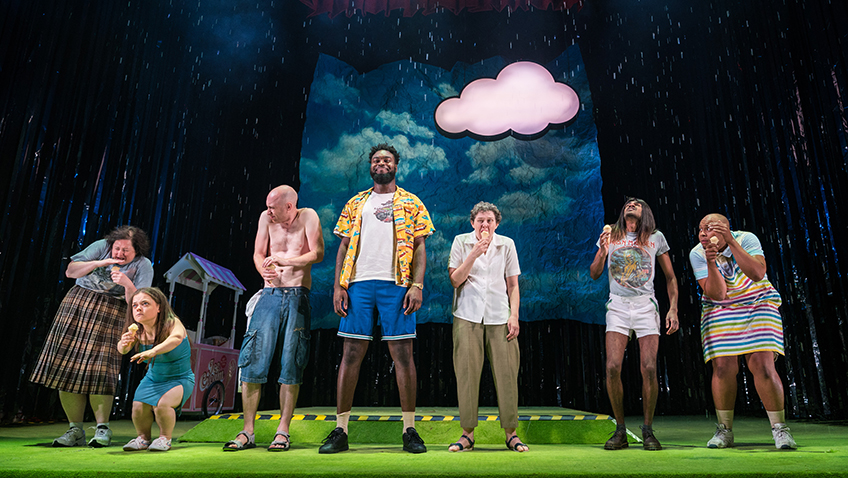 There is a gimmick. The audience has to enter at the rear of the theatre and go on to the stage and down a few steps to reach the stalls. There is a brass band playing on stage and you can buy an ice cream from a vendor.

Pity is about the total collapse of society.

If you thought Rory Mullarkey’s St George & the Dragon at the National Theatre last year was pretty awful, just wait until you see his crazy satire on the futility of war. 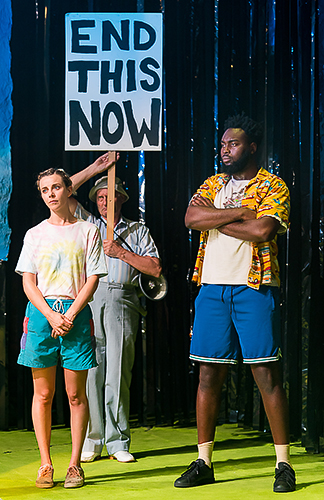 The war plan is to keep bombing until it gets better.

An unemployed Person (with a capital P and played by Abraham Popoola) goes to the town square to while away the time and meets the daughter of a professor.

What happens next, he says, verges on the ridiculous. And he is so right.

The great pity is that Mullarkey’s play is so unfunny and such an apocalyptic comic strip bore.

The professor, who is ranting about how awful everything is, is struck by lightning and dies. The daughter’s response is to have sex with the Person and then more sex.

A bomb goes off in a department store, killing people off-stage. The owner dies of a broken heart on stage.

There are more bombs. The blathering Prime Minister sings a song about sandwiches and is shot by a jolly sniper. The country is put on high terror alert.

Drinking water is poisoned. Paramilitaries shoot refugees. Acts of cannibalism occur. (It’s all right to eat people if you have been brutalized.) Nobody know who or why they are fighting.

The town square is hit by a massive drone strike. And as if that is not enough disasters for one evening, there are earthquakes, whirlwinds, a meteor strike, a storm, floods and a lethal pandemic.

Pity is a chaotic mess and deliberately so. The actors play cartoon characters without any character. There are very few funny moments. A postwoman speaks at great length without any full-stops, just like James Joyce.

I should warn you that Sam Pritchard’s relentlessly over-the-top production goes on for 1 hour and 40 minutes without interval.