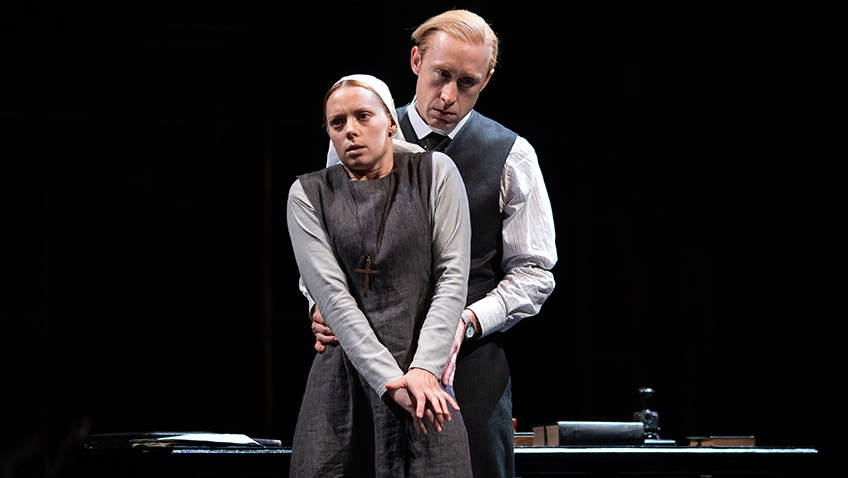 Gregory Doran sets his production, in fin de siècle Vienna – the decadent Vienna of Freud, Schnitzler, Klimt and Schiele. He opens with couples waltzing. Given that Vienna is bubbling with corruption and immorality, it would have been more louche to have opened in a high class brothel.

Shakespeare’s mordant satire on the abuse of power and the abuse of women, is always apposite and even more so in these #MeToo days. 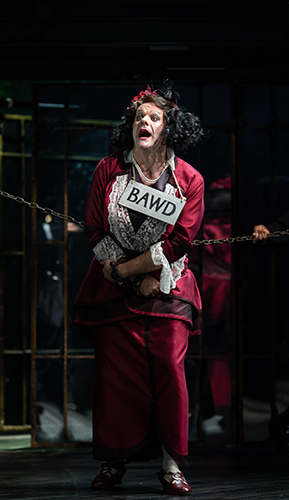 Graeme Brookes in Measure for Measure

The Duke of Vienna (Antony Byrne) has been lax in enforcing the law and decides to get his deputy, Angelo (Sandy Grierson), to clean up the mess whilst he absconds. He returns, disguised as a friar, to eavesdrop.

The first thing Angelo does is close all the brothels and sentence to death single men who get women pregnant. Angelo doesn’t temper justice with mercy. The jails are filled to overflowing.

Isabella (Lucy Phelps), a young novice about to take her vows, comes to plead for her sentenced brother’s life. She is outraged when he offers her the most common prid pro quo of them all. Angelo, frigid by nature, is shocked as she is to find that, when it comes to sex, he is as weak as everybody else.

The Duke, who at a realistic and at a symbolic level, represents Justice and Church, behaves appallingly. The question, then, is will Isabella (who put her chastity above her brother’s life) be allowed to return to the convent or will she be forced into marrying the Duke against her will?

The Duke is a difficult character to get right but to play him, as Antony Byrne, does for so much comedy, is not helpful. The play is a Christian parable on sin, repentance, mercy and forgiveness. The final scene, when Angelo is publicly humiliated, is particularly well acted.

Joseph Arkley is an unusually dapper Lucio, the lewd gossip, who slanders the Duke to his face, totally unaware that the friar he is chatting to is the Duke in disguise.

The RSC’s 50-50 policy in casting means that it is the norm for some of Shakespeare’s male characters to be turned into women. Escalus and the Provost are now female.