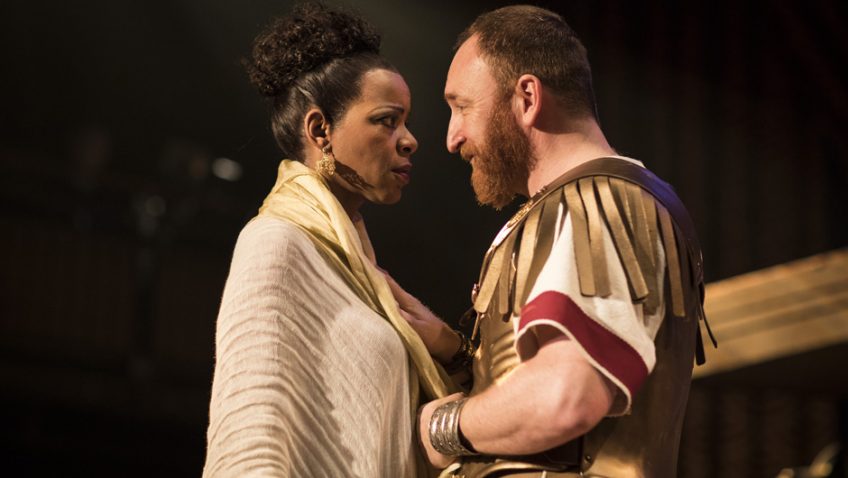 Julius Caesar and Antony and Cleopatra are two quite separate plays; but if you see them, as I did, as a double-bill, at a matinee and evening performance, it is even more of a shock to see what has happened to Mark Antony.

The triple pillar of the world has been transformed into a strumpet’s fool, so infatuated that he neglects duty and honour. In Julius Caesar. Antony is the charismatic, athletic young man, who is a brilliant orator. In Antony and Cleopatra, Antony is an old ruffian and he has aged so much that James Corrigan can no longer play him and the role is handed over to Antony Byrne.

The most famous lovers in history, Insanely jealous of each other and long past their sell-by dates, bungle everything. Antony even bungles his own death; and then lives long enough to learn that Cleopatra is not dead but merely wished to find out what he would do if he heard she were.

The serpent of Old Nile has always had a bad press and Shakespeare, like everybody else, observes her through the biased eyes of Rome, who loathed her because they were frightened of her. There is no indication at all in the play of her intellectual powers, which were considerable.

Shakespeare’s Cleopatra, devious, cunning, moody, voluptuous, vulgsr, farouche, is one of the great female roles and one of the most difficult. She is both regal queen and wanton whore, a woman of such infinite variety, that her mood changes minute by minute, and sometimes even in mid-sentence, going from one extreme to another, until she is almost a parody of sexual obsession.

When she learns that Octavius Caesar intends to exhibit her through the streets of Rome in his victory parade, she prefers to commit suicide. The play is Antony’s tragedy, but she still manages to upstage him in her death scene. Josette Simon comes into her own at this moment.

Iqbal Khan’s production is not as lucid as Andrew Jackson’s production for Julius Caesar and it doesn’t really come to life until after the interval and Antony’s humiliating defeat at the Battle of Actium.

Byrne’s deep awareness of what Antony once was and what he is now and the shame it brings is vigorously expressed and is the high point of his performance.