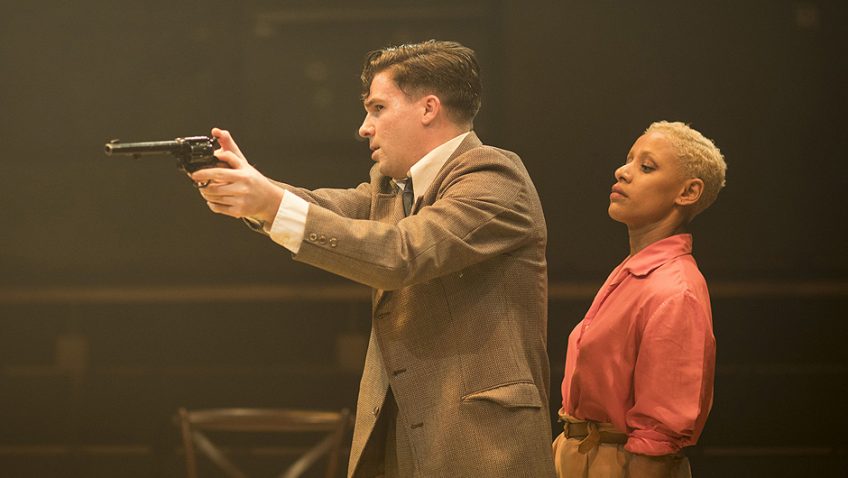 Bernard Shaw is often criticized, and not least by himself, for being all talk and no action; but who cares when the talk is so brilliant and such fun.

Misalliance, which premiered in 1910, is a witty freewheeling debate about the impossible gulf between parents and children. The parents emerge just as foolish as their offspring, John Tarleton (Pip Donaghy), the self-made, well-read businessman, has made his fortune selling underwear. His daughter, Hypatia (Marli Siu), a typical Shavian modern woman, bored by conventional family life, is prepared to marry a man she does not love because he has brains.

She quickly changes her mind, however, when a dashing aviator (Luke Thallow) literally drops in from the sky. “Buy the brute!” she tells her father when the chap says he can’t afford to marry her.

A Polish acrobat (Lara Rossi) drops in – literally, her aeroplane having crashed into the conservatory. Garbo-esque, she drives all the men crazy.

A young clerk (Jordan Mifsud) emerges from a Turkish bath, wielding a revolver, wanting to revenge his mother’s shame. His only baggage is his moral outrage and his half-digested socialism. He is funny and pathetic.

Perhaps, the most surprising thing about the play is that underneath all the comedy is the seriousness. The clerk suddenly launches into a tirade against the drudgery of his 9 am to 6 pm book-keeping job.

There is a also good scene when Callous Youth confronts Old Age: Hypatia puts a man old enough to be her grandfather (Simon Shepherd) who has made a pass at her, in his place.

The idea that the excruciatingly unmanly young man, who screams and cries at the slightest provocation, would want to marry any woman is meant to be absurd; but Rhys Isaac-Jones overdoes it terribly.

Shaw is vastly entertaining. He should be revived much more often. Has anybody thought of reviving Getting Married?