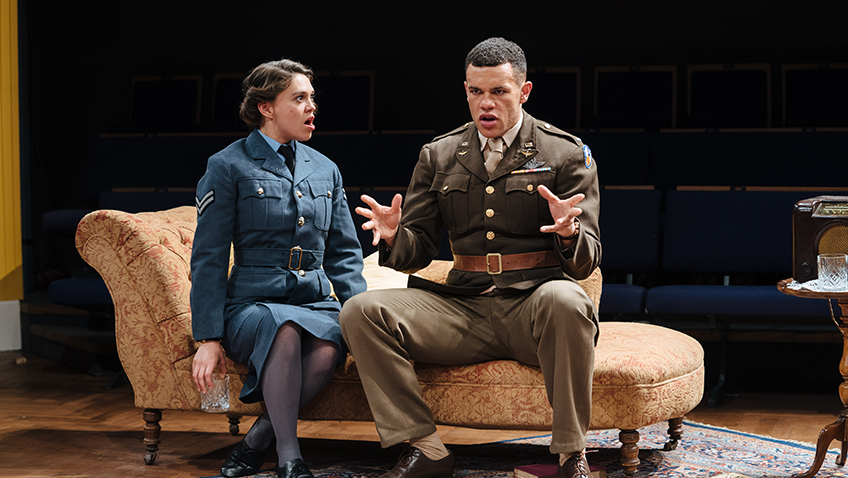 Terence Rattigan’s While the Sun Shines, a high-spirited wartime comedy, a companion piece to his RAF drama, Flare Path, premiered on 24 December 1943 to rave reviews and ran for 1,154 nights.

Everybody is in uniform. The Earl of Harpenden (Philip Labey’s likeable British sailor) is about to marry Lady Elizabeth Randall (Sabrina Bartlett’s charming WAAF corporal) when an American lieutenant (Julian Moore-Cook, astutely cast) and a Free French lieutenant (Jordan Mifsúd) arrive out of the blue and both fall in love with her. 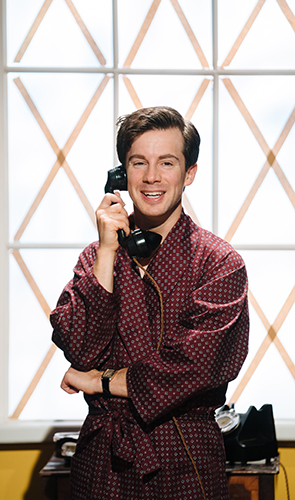 Philip Labey in While the Sun Shines

The Earl had actually picked up the drunken American lieutenant in the street and taken him back to his home and bed in chambers in The Albany in Piccadilly, where Rattigan also lived.

Anglo-American relations increased due to the “drink, eat and be merry for tomorrow we die” wartime attitude. (Rattigan assumed the three young men would be killed in the war.) Social and sexual freedom flourished in the black-out. Bunking in other people’s beds was the norm.

Homosexual liaisons were common during the war. There were plenty of Americans wandering all over London just waiting to be picked up and boast they had slept with an Earl. 130,000 Black American GIs were billeted in the UK.

The Earl’s father-in-law-to-be is a gambling, womanising, impecunious Duke, a brigadier, who desperately needs his daughter to marry a rich man. The Earl is worth two million. The Duke (Michael Lumsden) is based on Rattigan’s dodgy dad.

The Earl has a mistress, a patriotic trollop with a heart of gold and she has one of those stiff-­upper-lip scenes, which Rattigan and Noel Coward did so well. They have been much parodied since; but when they are performed perfectly, as they are here by Dorothea Myer-Bennett, they work a treat.

The comedy is inconsequential but funny. Rattigan always claimed that the absence of epigram, literary phrasing and verbal wit were deliberate and were not only not a vice but were in fact a virtue. He has said that “Yes” was one of the funniest lines he ever wrote.

Paul Miller’s nicely acted revival is a lot of fun, pure escapism, just what wartime audiences wanted. I wish the performance had been given a World War II context with perhaps some recorded war songs in the foyer and even possibly an Air-Raid siren followed by an All-Clear siren at the curtain call. The actors in While the Sun Shines in 1944 continued to perform throughout the doodlebug raids.