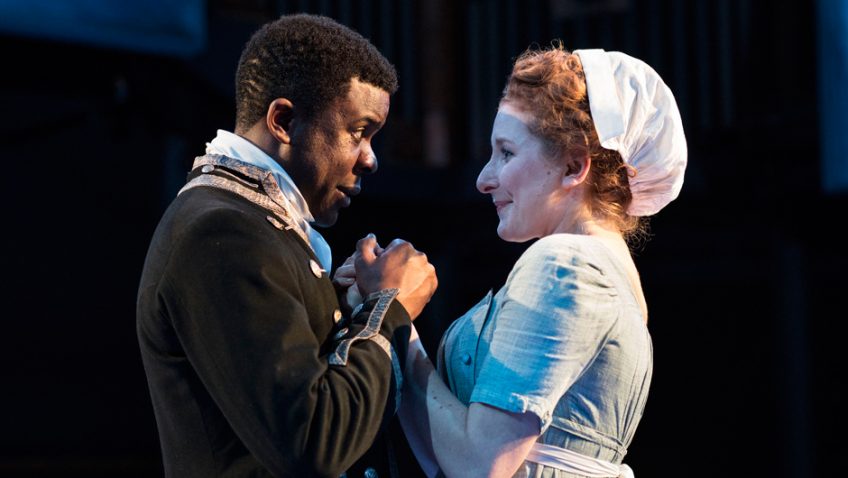 Marivaux’s Game of Love and Chance

Pierre Carlet de Chamberlain de Marivaux (1688-1763) is one of France’s greatest playwrights and his plays are too rarely seen in Britain. So, thank goodness for the Orange Tree.

The Lottery of Love is John Fowles’s title for his translation of Marivaux’s Le Jeu de L’Amour et du Hasard, one of the most popular romantic comedies, which premiered in Paris in 1730. Keir Charles and Claire Lams in The Lottery of Love

The comedy, cleverly worked out, beautifully written, has a delicacy and lightness of touch which is charming.

Marivaudage, a word coined by Voltaire, who didn’t like Marivaux’s plays, used to mean all style and no substance. Nowadays, it is more fully appreciated that beneath the plays’ polished artificial surface there is genuine feeling and psychological truth.

The action is internal. The badinage needs to be acted with style. Marivaux is the master of conflicting emotions.

Fowles’s translation was commissioned by the National Theatre but not staged publicly. Paul Miller’s production is its world premiere.

Fowles sets the play in Regency England in the Jane Austen era and has, apart from the heroine, Silvia, anglicised all the characters’ names.

Sylvia’s father (Pip Donaghy) wants Sylvia (Dorothea Myer-Bennett) to marry Richard (Ashley Zhangazha) but Sylvia wants to find out what Richard is really like. So she and her maid Louisa (Claire Lams) swap places so that Sylvia can observe Richard unawares.

But unbeknown to her, but known to her father, Richard has decided to swap places with his servant Brass (Keir Charles) so that he can observe Sylvia.

The result is that all four of them fall in love, each believing the other is either beneath them or above them socially.

Marivaux took his characters from the commedia dell’arte and gave them subtlety.

The masqueraders are fine, except for Keir Charles, who, playing the servant pretending to be the master, acts in too broad a style as if he were at the Theatre-Italien rather than at the Comedie-Française; but presumably that is what Miller wants.