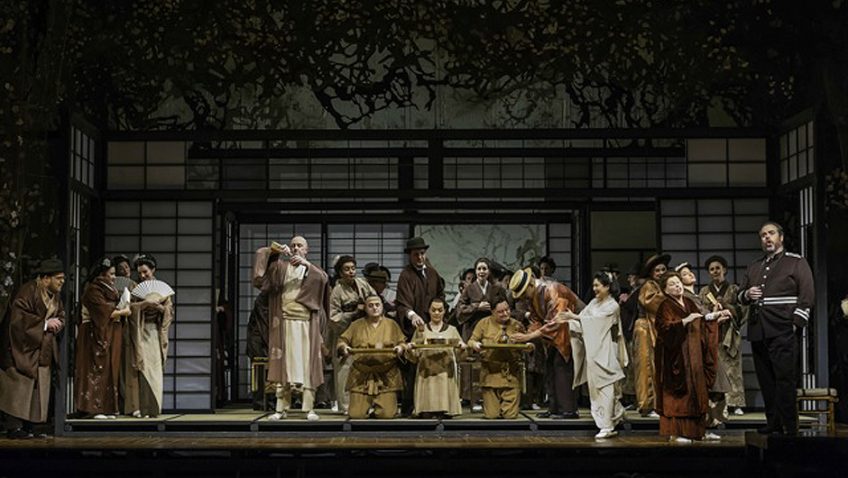 Director Joachim Herz’s Madam Butterfly has been a firm favourite with audiences for nearly 30 years and with good reason. This production is a classic, faithful to the traditional staging of this much loved opera but with a small twist in its examination of the impact of imperialism.

On the night MT attended the Bristol Hippodrome, the title role was to have been sung by the Korean soprano, Karah Son. However as she was indisposed the role was taken by the Welsh soprano, Natalya Romaniw. Despite this being Natalya’s debut with both the company and the role, she showed no sign of being daunted by the task and sang magnificently. Her performance of Un bel di, perhaps the most recognised scores in all opera, thoroughly deserved the rapturous applause it received.

She captured the naivety of the young Butterfly beautifully and gave a passionate portrayal of a woman coming to terms with the betrayal of the man she loved and her decision to make the ultimate sacrifice. Jonathan Burton’s portrayal of Pinkerton was wonderful and conveyed the characters arrogance perfectly. Here was a man who clearly saw his marriage to Butterfly as a delightful dalliance.

The WNO orchestra was a tour de force. Conducted by Andrew Greenwood, blasts of the Star-Spangled Banner and snippets of authentic Oriental melodies are intertwined with the wonderful score.

The set by Reinhart Zimmerman is delightful in it’s simplicity. A sepia cherry orchard surrounds a tradition Japanese house with its fusuma panels used to great effect in creating different spaces. A miniature version of the town of Nagaski sits at the front of the stage, giving focus to Madam Butterfly’s constant searching of the horizon for the return of her American husband.

If you’ve never seen an opera before then treat yourself and go to see this. This is a production that both musically and visually ravishes the senses.