Home / TRAVEL / DAYS OUT / The Revenge of the Bat! 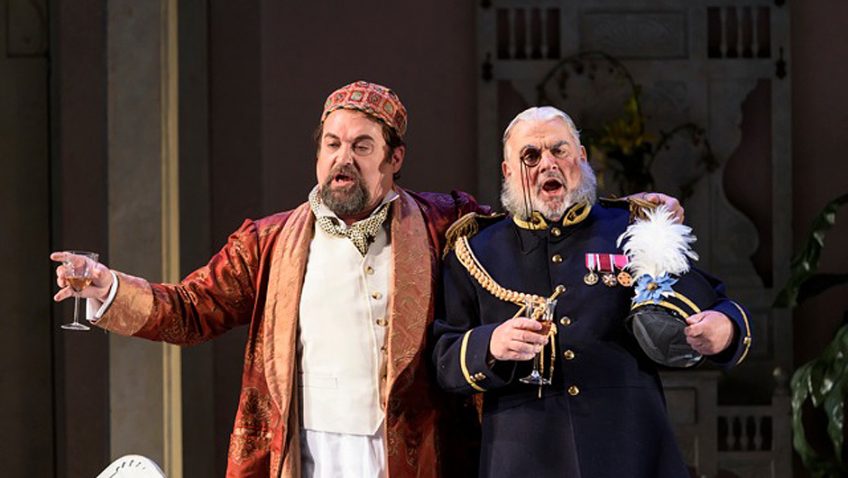 The Revenge of the Bat!

Welsh National Opera have a justified international reputation for musical excellence and so it’s no surprise that this production of Die Fledermaus is an absolute joy; an explosion of visual and auditory splendour and laugh out loud funny.

A magnificent masqueraded ball given by Russian Prince Orlofsky is the backdrop to this sparkling and witty tale about mistaken identity, misunderstandings and revenge! As the characters are brought together in various guises, the scene is set for a hilarious story wrapped up in sumptuous costumes and all set to wonderful music. The score by Johann Strauss II is rich, romantic and rousing, featuring some of the most irresistible and memorable melodies ever written for the stage. The WNO orchestra conducted by James Southall was a tour de force, performing this wonderful score with enthusiasm and unbridled joy.

This production will transport you to early 1900s Vienna in a sparkling and lavish production that revels in the humor, farce and frivolity of the story. It is full of opulence, splendid costumes and luxurious detail.

The wit of the sung translation and the humour of the dialogue are wonderful and the jokes well received by an appreciative audience. The cast for Die Fledermaus includes Judith Howarth in the role of Rosalinde and Mark Stone as her errant husband, Eisenstein. They are joined by Ben McAteer (Falke), Rhian Lois (Adele), Alan Opie (Frank), Paul Charles Clarke (Alfred), and Anna Harvey (Orlofsky). The performances were well acted and very funny and as you might imagine, the singing was wonderful. Joining the cast was the actor Steve Speirs, making his opera debut as the prison guard Frosch. With a string of successful TV and film performance to his credit he can now claim the comic opera title as well. He was fabulous; engaging with the audience and the orchestra to great comedy effect. Look out for the two policemen/guards as well!

If you have never seen an opera or operetta before, give this a try. You will definitely leave the theatre with a smile on your face, wonderful tunes in your head and a spring in your step!

You can catch Die Fledermaus at the Bristol Hippodrome on Friday 17th November and for a matinee performance on Saturday 18th November and at The New Theatre, Oxford on 1st and 2nd December.