Home / LIFESTYLE / REVIEWS > / FILM REVIEWS / No one in this frenetic action film is having a good time, but you might 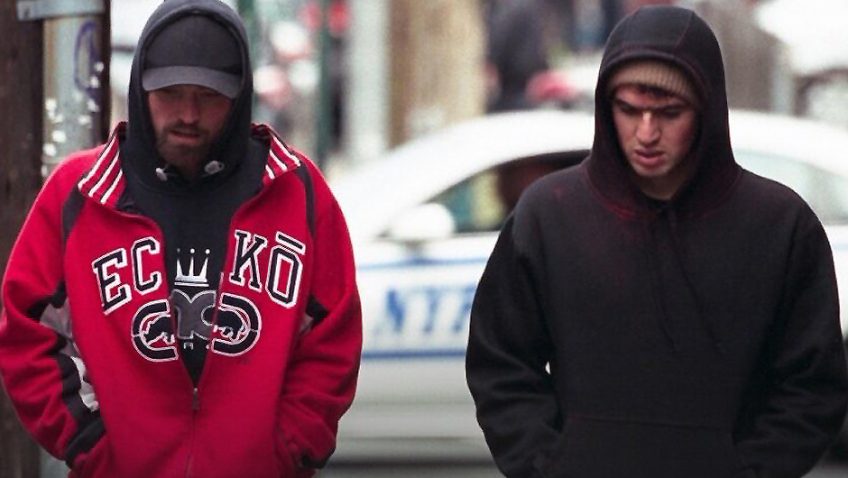 No one in this frenetic action film is having a good time, but you might

Connie Nikas’ frenzied 24-hour nightmare in Queens, choreographed to the emphatic electronic music of Brooklyn musician Oneohtrix Point Never is not what anyone would call having a good time. Even the audience might feel battered, although there’s no question of anyone being bored in Benny and Josh Safdie’s all-action, frenzied journey.

With the music’s intentional echo of 1980’s pop culture, the night time filming, the New York setting and the ironic adjective ‘good’ in the title, Martin Scorsese’s 1986 masterpiece Goodfellas springs to mind even more than does the Safdie’s last film, Heaven Knows What. If you backtrack a few years to Taxi Driver’s insomniac loner, Travis Bickle, though, you have a closer proximity to the ball of explosive tension and misdirected rage that is Connie, played by an almost unrecognisable Robert Pattinson in his best performance since the Twilight series. A reference point closer in time, if not in location, is one-take wonder Victoria chronicling a young woman’s 24-hour roller coaster journey through Berlin leading up to and following a botched heist.

Although blood and violence are a fact of life for both Edward Cullin and Connie Nikas, when it comes to the opposite sex, Connie is closer to Conan the Barbarian than to the chivalric, romantic heartthrob Edward Cullen. After dragging his mentally challenged, hard-of-hearing brother Nicky (played in a mannered fashion by co-director Ben) out of a therapy session to carry out what turns out to be a botched bank heist, Connie visits his girlfriend, Corey (a brilliant, but underused Jennifer Jason Leigh) at her mother’s house. Neither Corey nor her suspicious mother are surprised that he’s not there to invite her to dinner.

Connie persuades Corey to use her mother’s credit card to bail Nick – who panicked during the escape and was apprehended – out of Riker’s Island prison. Connie cannot use the heist money with as the bank teller put it in a bag which, when opened, sprays the money and anyone near it with red dye. He berates poor Corey when he learns that her mother realises what is happening and cancels her credit card. Failing to post the bail bond, Connie decides to smuggle his brother out of the hospital where he is told Nicky is recovering from injuries sustained during his capture. Connie identifies his brother’s room from a police officer guarding the door. When the cop goes to the vending machine, Connie hauls the unconscious patient, his face obscured by bandages, into a wheel chair and down to a conveniently waiting Dial-a-Ride van.

Connie convinces the driver to deliver his brother to an address in Queens that he has targeted: the home of an older, Afro-American woman and her 16-year-old granddaughter, Crystal (new comer Taliah Webster). Inventing a series of lies to explain why he cannot gain access to his own home, the kind-hearted grandmother agrees to let them spend the night. Meanwhile, Crystal is bemused and intrigued by this good looking stranger who bleaches his hair blond in their bathroom and, bored at home, decides to lend Connie the keys to her grandmother’s car. If Connie believes he can relax for a few minutes and seduce the accommodating Crystal, he hasn’t taken into account the fact that he has rescued the wrong convict.

The presence of the initially belligerent, perpetually jumpy Ray (Buddy Duress who co-stars in Heaven Knows What) in place of Nicky is not only a major set-back, but a plot device to keep the momentum – and Connie’s quest – going. Ray, a loser in over his head, has a valuable container of LSD stashed in an abandoned amusement park, and Connie needs that money to bail out his brother.

There is artistry in the making of this film, even if some viewers will fail to see the point of it. In addition to the electro-pop music, Ryan Price’s sound design is as inventive as are the obstacles that fall in Connie’s path, suggesting the pressure that is mounting in his fevered mind. One of the best – and most annoying – is a conversation through a bedroom door over the terrifying barking of an onerous guard dog.

And, as you would expect from filmmakers who cast their camera on social outcasts living on the margins of New York City, there is social commentary, subtly woven into the fabric of the nearly absurdist action. When an alarm summons the police to the amusement park, they see Crystal waiting in the car. Despite her petite size and age, they seem to assume from her colour that she is involved, hauling her off to jail. Similarly, when they see the black security guard (played by Barkhad Abdi, the hijacker in Captain Phillips) lying on the ground badly beaten, they haul him off as well – never questioning why the white man wearing the security guard hat (Connie) would have used such excessive force, or has left the alleged burglar bleeding on the ground.

While the filmmakers drop hints that Connie has grudges against the system and believes that he is rescuing Nicky from soul destroying institutionalisation, even the anarchists in the audience might doubt that he is the best guardian for his brother. What differentiates Good Time, Victoria or even Taxi Driver, is the complete lack of compassion in the protagonist, who uses people – even his brother – without compunction. We do not even have a back story that might explain the absence of any redeeming qualities that we can connect to. Pattinson and the skilful direction keep us watching, but it’s hard to care what happens.