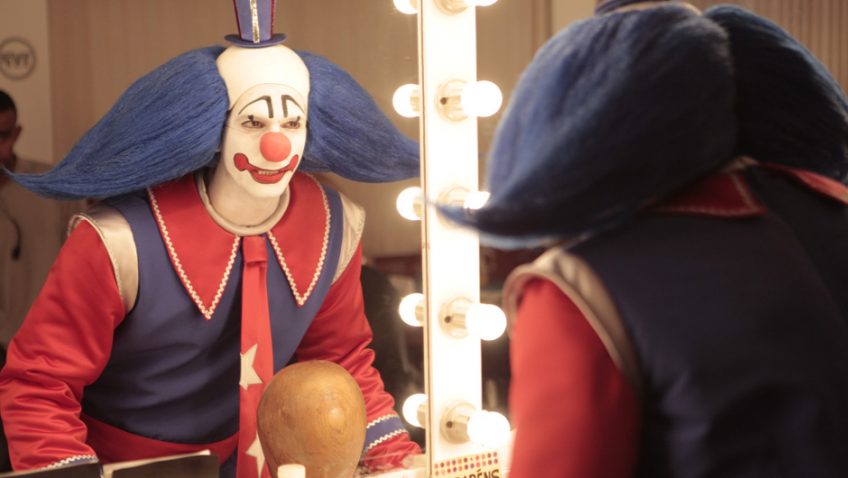 While Bingo: King of the Mornings is unlikely to take home any Oscars, it is not surprising that it is Brazil’s entry to the Academy Awards. Although television has lost some of its appeal since the 1980s, Brazil is still a country that worships at the throne of the telenovela (soap opera) from 6 until 10pm, six days a week, while movies are a minor form of entertainment. The debut feature of the celebrated film editor, Daniel Rezende (The Tree of Life, The Motorcycle Diaries, City of God), is not only a behind-the-scenes look at the making of a popular children’s television programme, but a redemptive biopic of Arlindo Barreto, a porn actor turned unlikely children’s TV star, whose ex-wife and mother, Márcia Couto Barreto, were real-life telenovela stars. When Augusto Mendes (Vladimir Brichta) – the name given to Arlindo Barreto, presumably for legal reasons – has custody of his son Gabriel (Cauã Martins), he sometimes takes him to work, asking Gabriel to stay put while he disrobes for the camera in pornographic videos. One day Gabriel is curious and watches dad at work. This foreshadows a scene later on when curious Gabriel gets drunk from an unemptied bottle after his father passes out on the couch. Still, Gabriel worships his fun-loving father who promises his son that someday he will be the star of a programme that Gabriel and all his friends can see.

Unlike Gabriel, who feels very much the outsider, Augusto grew up in the limelight thanks to his hugely successful mother (Ana Lúcia Torre), a telenovela star who encouraged her son to follow suit. If his mother does not approve of the porn, Augusto is furious that she has been relegated by TV giant Mundial (read TV Globo) to being a game show judge. His need to be in the limelight is working against him. When his ex-wife gets him a one-line role as a chauffeur in her telenovela, Augusto improvises to expand his role, much to the amusement of the show’s bemused star, though not to the network.

Augusto’s wish comes true when, while preparing for another bit-part audition in a telenovela, he lands the role of a clown in a new children’s programme. He is lured to the audition by the studio, purpose built for the show, and the fact that it is based on America’s no 1 kid’s programme, Bozo the Clown (renamed Bingo, here, for legal reasons).

In reality Barreto was not the first Bingo/Bozo, of which there were dozens around the country, but he was one of the most successful in Sao Paulo. In the film, a third-ranking television network has gambled everything on the success of the re-make rights. But it is Augusto who understands that Brazilian kids are different from American kids and is solely responsible beating Mundial to the number one spot. Vladimir Brichta in Bingo: The King of the Mornings

There is, however, a cost to this success as the contract calls for all Bingos to be anonymous. The film is really about Augusto coming to terms with his moth-like drive toward the limelight and the frustration of remaining unknown. While Gabriel can watch the programme and rejoice in seeing his dad on air every day, he cannnot brag about it to his friends. When they ask what his dad does, he cannot say.

Augusto’s own frustration is highlighted in a dramatic scene in which he must go up on stage to collect an award –made-up and dressed as Bingo. Rezende gives us an imagined version of the event as Augusto dreams of ripping off his fake wig and nose and wiping off the white greasepaint to reveal the real person to all those who passed him up for parts and to the crowd of his peers.

After his mother’s premature death in 1982 – which Augusto blames on TV Mundial – and depressed from this lack of recognition, he sinks deeper into his life of debauchery that, to be fair, he never completely gave up, even when landing the role of Bingo. An exhibitionist, spends a lot of time parading around in his red briefs, even in his dressing room in the purpose-built Bingo studio.

Bingo: King of the Mornings might remind film buffs of Paul Schrader’s 2001 Auto Focus, based on the true story of Church-going family man and D-Jay Bob Crane, the unlikely star of the popular family sitcom Hogan’s Heroes. When the series is cancelled, and he cannot find another job, he turns to pornograhy and becomes addicted to sex. When Crane is offered a role in a Walt Disney movie his reputation catches up with him. That said, the story of Augusto Mendes/Arlindo Barreto is about the call of the limelight and it is redemptive as, with the help of a good woman – the programme’s church-going, straightlaced producer Lúcia (Brichta Leal) – he finds fulfillment in life. That said, today’s female audiences might find it difficult to forgive Augusto’s sexist banter and verbal harrassment, particularly when it is directed toward the show’s producer, and the woman who becomes his wife.

Rezende transports us back to the 1980s, capturing the look and feel of Brazilian television with its gaudy neon-lit sets and with his use of ratio-changing formatting and the expressive design of his mother’s home and Augusto’s bachelor pad. While the film’s theme might be universal, what does not translate is what made Mendes/Barreto so special: his jokes are not particularly funny or clever either at his audition or on air. Luiz Bolognesi’s script is, however, well-served by the charismatic actor Vladimir Brichta who puts in a lively lead performance and looks the part. While the rise and fall story is fascinating, it is familiar and predictable, while a few melodramatic moments play out like a bad telenovela.