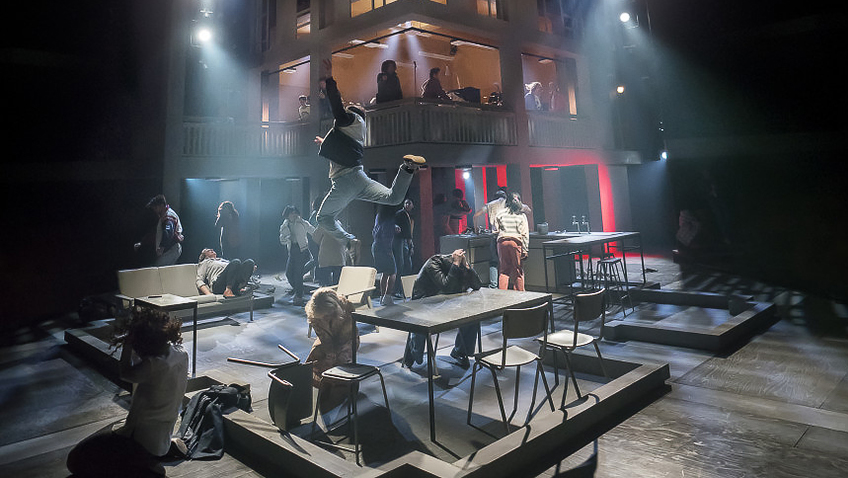 A universal standing ovation suggests Standing at the Sky’s Edge is a very special show. Indeed, with remarkable elements of just about everything, all brilliantly delivered in words and music, it’s moving, it’s meaningful and it’s exhilaratingly big.

Chris Bush creates ongoing magical vibrancy with an ingenious dramatic structure. As she brings to life warm, troubled characters from three different eras spanning almost sixty years, she creates a close, cleverly timed onstage overlap and interweave of their lives and relationships; at the same time she depicts vividly the tranches of social history that affect them. Comic hilarity, big choruses, stupendous solos, terrible twists and enchanting turns all play their part, as hope, joy, tragedy and despair take turns in life and individuals must sink, swim or move on. Linking all the characters to each other – and to Dr Who, Pulp, Utopia, Thatcherism and slow-baked aubergines served with Henderson’s relish – is an imposing block of Brutalist flats, the largest listed building in Europe: Park Hill, Sheffield.

Most such complexes were blown up long ago all around the land, but these sprawling flats stand proud still above the railway station on one of Sheffield’s seven hills. In the early sixties, the “streets in the sky” offered a Le Corbusier-inspired social housing Utopia to families who’d been living in little more than slum conditions, but as the steel industry declined, unemployment grew, community structures broke down, and the flats degenerated until extreme anti-social behaviour ruled the dilapidated roost. Today, in their fashionable gentrification mode of gaily-clad panels, these same spaces offer upmarket homes.

Chris Bush’s characters, taken from each of these eras, are successive occupants of one particular flat. Rose and Harry are the grateful, hopeful, sixties’ couple, re-housed from a clearance area, Rachael Wooding and Robert Lonsdale engaging with great poignancy as their lives takes unforeseeable turns. In 1989 Liberian refugee couple and niece Joy have no choice but to make this same place their new home even though it’s now a no-go area. Transforming from Liberian schoolgirl into Sheffield mum, Faith Omole is, indeed, a great Joy. In 2016, well-spoken Poppy flees London and a rocky love life to take this newly refurbished, upmarket apartment. Providing great North-South, class-division comedy along the way, Alex Young flounders nicely as the Southerner fish out of water who slowly discovers it’s not so grim up north.

Richard Hawley, whose success as solo artist followed his Pulp years, laughed when asked to collaborate on a musical. But this is not a conventional musical and Hawley’s songs – some new, others existing hits – were not written for the characters in this drama nor to carry its narrative. Yet they work amazingly well. His melodies full of wistful nostalgia, hope and longing, and lyrics laced with love for his (and Bush’s) native city perfectly encapsulate the drama’s moods, while the more dirge-like droning of some of Hawley’s own renditions gives way to a whole variety of expressive, often brighter versions. The sentiments expressed are so universal that songs can be shared with equal relevance by all the characters (Lady Solitude, There’s a Storm A-Comin’, Tonight the Streets are Ours), while tremendous, heartfelt singing comes in solos from the likes of Maimuna Mamon (Open Up Your Door), Alex Young and Faith Omole, sung around the set or gig-style at moveable microphones. The mighty massed ensemble number Standing At The Sky’s Edge, complete with cloudy mists and a population of extra residents played by Sheffield People’s Theatre, comes not as big finale but as Act Two opener, following a colossal Act One finale which just about brings the house down.

Dominating the stage, Ben Stones’ imposing, towering, austere Park Hill rises up over its shadowy undercroft. On its first floor sit guitars, strings and keyboard, integrating into the gig-style performances with special changes of lighting, while actors and singers use the walkway balcony extensively. Below, looking impossibly awkward to negotiate, an angular perimeter ridge skirts the kitchen-room layout with its skinny-legged furniture, home to three consecutive families.

The touching individual stories carry universal themes of identity, community, togetherness and lead to the conclusion that “home” actually means the people around you. All finally comes full circle back to songbirds and washing lines hung with hope in a vibrant entertainment, full of genuine heart.

The show runs at The Crucible until April 6th