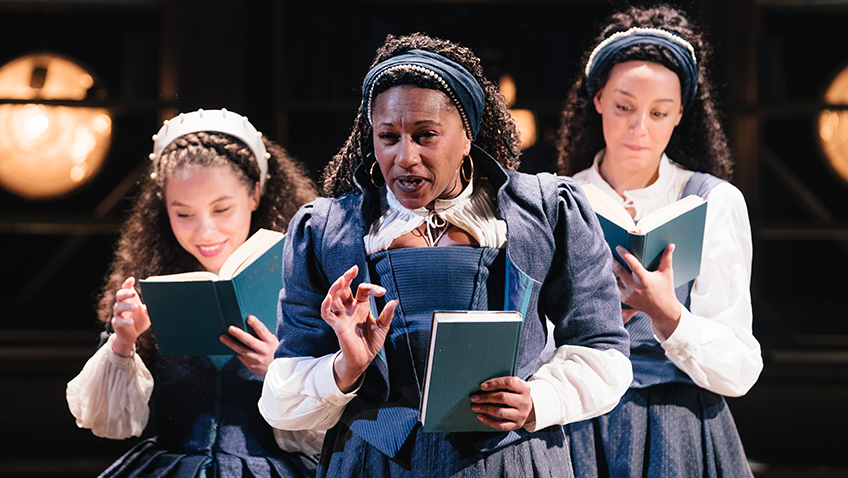 Emilia is a rallying-call for women

Emilia was written with the context of the #MeToo Movement. The play, a feminist manifesto, has not only a female author, but also a female director and an all-female cast. Even the producing team is all-female. 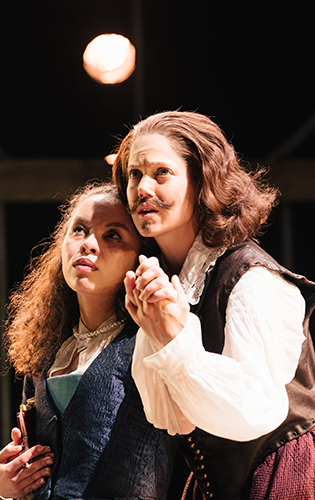 The play ran for only 11 performances but such was its success with Globe audiences, it has now arrived in the West End.

Nicole Charles’ loud-mouthed and rabble-rousing production, I suspect, worked better at the groundling inter-active Globe than it does at the proscenium arch Vaudeville Theatre.

I knew we needed an all-female cast, said Morgan Lloyd Malcolm, because it would be a woman’s story told by women. Emilia is played by three actors: Saffron Coomber (youth), Adelle Leonce (middle-age) and Clare Perkins (old age).

400 years ago Emilia wanted her poetry to be heard. She longed for recognition. But women in her day were only allowed to write religious verse.

She published Salve Deus Rex Judaeorum (Hail, God, King of the Jews) in 1611 which took a radical feminist approach, defending Eve (and indirectly all women) and putting the blame firmly on Adam for the Fall of Man. She castigates men for forgetting they were born of women.

Morgan Lloyd Malcolm’s sprawling, didactic script (which would benefit from editing) is written in a mixture of historical and contemporary language with quotes from Shakespeare, most notably the Sonnets and the condemnation of men by Shakespeare’s stage character Emilia in Othello.

The late-historian A. L. Rowse, who edited Emilia’s poems, claimed that Emilia Bassano could be the Dark Lady of Shakespeare’s sonnets. This has inspired Morgan Lloyd Malcolm to imagine meetings between Emilia and Shakespeare.

It is not impossible. At 18 Emilia became mistress to the 61-year-old Henry Carey’s, Lord Chancellor to Queen Elizabeth 1; and he as patron of the Arts would certainly have had direct contact with Shakespeare and his company of players and his plays.

Emilia (Clare Perkins) in the final moments of this two-and-a-half hour production has a long monologue in which she rages against men. The #MeToo first night audience responded to her call to arms, as you might guess, with loud applause and vocal fervour.