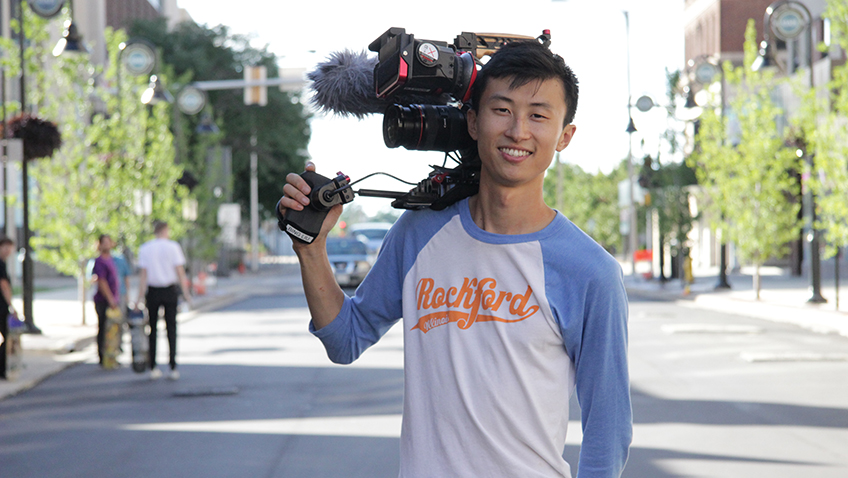 There are plenty of coming-of-age films and films about skateboarding, but relatively few where – even in a documentary – you feel a personal connection and deep compassion for all of the characters/subjects. What begins with thrilling footage of a group of Rockford, Illinois skate boarders, shot by self-taught skateboarding filmmaker Bing Liu, evolves organically over the years into something quite profound. In time, Bing Liu goes to film school in Chicago, returning to Rockford to become a participant in his own documentary. As both a vulnerable boy coming to terms with his mother’s dark confession, and an objective filmmaker, he peers into the gap between fathers and sons and childhood and adulthood with an overwhelming immediacy that will touch everyone.

The three young men are united by their recession-hit Rust Belt hometown, Rockford, Illinois; their addiction to skate-boarding, and by the gap between parents, (primarily absent or abusive fathers and step-fathers) and sons. As Bing Liu is a first generation Chinese immigrant and son of a factory worker; 23 year-old roofer Zack Mulligan is white, 17-year-old Keire Johnson is black, and Zack’s ex-girlfriend ends up a young single mother with a baby, it is also a microcosmic portrait of working class youth in small town America today.

All three young men stopped living at home on a regular basis in their teens, driven out by difficult relationships with their parents. Keire’s father’s death at age 52 when Keire was hitting puberty was a blow, and he hides in his messy room when he is at home at all. His father was very strict, but taught Keire the importance of his black roots and to maintain his identity with his mostly white skateboarding friends.

Zack claims he was not even living with his family when he was 15. His skateboarding friends were his family. ‘ We look out for each other; no one else does.’ Good looking, easy-going, and charismatic, Zack, in his youth, is the centre of attention, but we only see him without a beer in hand when he is skateboarding. Bing Liu came to Illinois via Alabama from China when he was eight and his single mother took a job in a Rockford factory. She married a man who, when he wasn’t being ‘sweet’, beat her up and was an abusive step-father.

We see a group of boys climbing on roof tops with no ladders or safety nets, and skateboarding across oddly empty motorways, so fluidly and gracefully it looks like performance art. Skateboarding is assumed to be an escape, but for these boys it is also a means of feeling in control of their lives. The bruising, the falls, and the more serious injuries could be managed and obstacles could, quite literally, be overcome. From the age of 13 when Bing began living with a family of fellow skaters, he tells us, I’d gain a sense of control over my pain.’

‘It’s amazing how having a kid can make you grow up,’ Zack tells the camera shortly after we notice that Zack’s girlfriend, Nina, is pregnant. Zack says he would do anything for his son (Eliot) and wants to help him succeed to be anything he can be’, but before long Zack and Nina’s arguments are so frequent that they separate. Early on we witness the arguments erupting when Nina wants to go out with her friends, leaving Zack with Eliot. According to Zack, she would not give up her freedom. When Bing Liu interviews Nina, she confesses that Zack hit her – as his father had hit his mother. Bing Liu has difficulty believing this, but has to accept it. 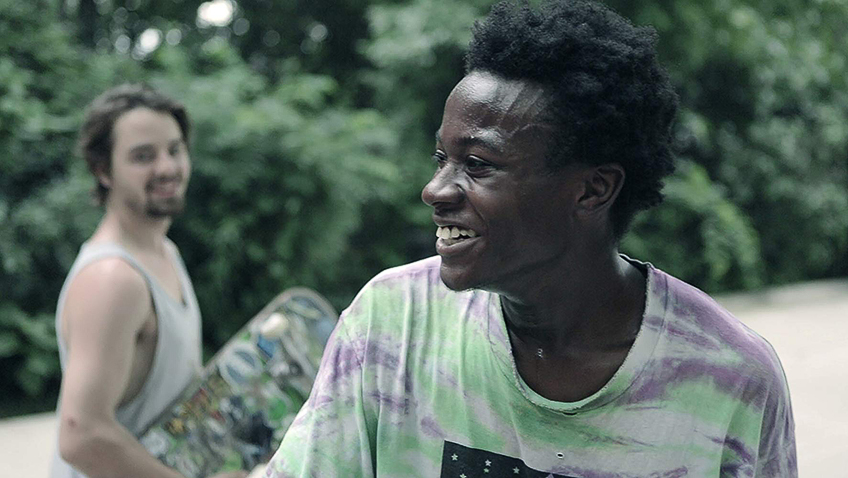 Keire Johnson and Zack Mulligan in Minding the Gap

Nina and Eliot go to live with Nina’s aunt and uncle who live in a comfortable, large house. ‘They pretty much adopted me at the age of 21’, Nina says, adding that she finally knew what a family was. Zack meets a woman, Sam, who pays for him to fly to Denver where he works for a while. Although he pays child support, he is still drinking and unhappy. Eventually he moves back to Rockford with Sam.

Keire starts hanging out with younger skaters who ‘are on a better path’. Continually afraid of being ‘stuck’ in Rockford, Keire gets a job as a dishwasher and saves up for a car. The significance of graduating from a skate board to a car is left for the viewer to process. Before leaving Rockford, Keire is promoted to waiter, and he is delighted that he no long has to scrub pots and pans.

In a remarkable sequence Bing Liu interviews his own mother and discovers a painful, but apparently cathartic secret about domestic abuse. It is as difficult for Bing Liu and the audience to hear as it is for the mother to admit.

Bing Liu reminds us that he, Keire and Zack grew up in the midst of violence and deprivation. Rockford is apparently one of the most dangerous cities in the country for a city with a population of under 200,000 and nearly a third of that crime can be attributed to domestic violence.

Throughout these dramatic interviews we return to scenes of the three young men sailing through the city, over walls and bollards, down steps and along walls and down traffic-free streets. Just to watch them is uplifting and liberating. Bing Liu, Keire and Zack are not part of the population that is in prison. Nor are they, with the exception of Bing Liu, who went off to university, educated to a professional standard with a goal in life. They are lost souls who have to find themselves, and along the way find a family through skateboarding.

Because the film was made over time and continually evolved based on reactions to the footage, Minding the Gap

there are gaps in the narrative, too. Bing Liu wants to avoid expository narration where possible and to stay out of the way, and at times it is difficult to tell who is talking or about whom he is talking. The time frame is also difficult to gauge and it is not clear in the film that Bing Liu has gone off to Chicago while still continuing with the film. These are minor quips in a film that paints a moving and empathetic picture of the effects of abusive or lost father-figures. Captions at the end leave us with some hope that these deserving young people not disappear through the gaps on their way to meaningful lives.