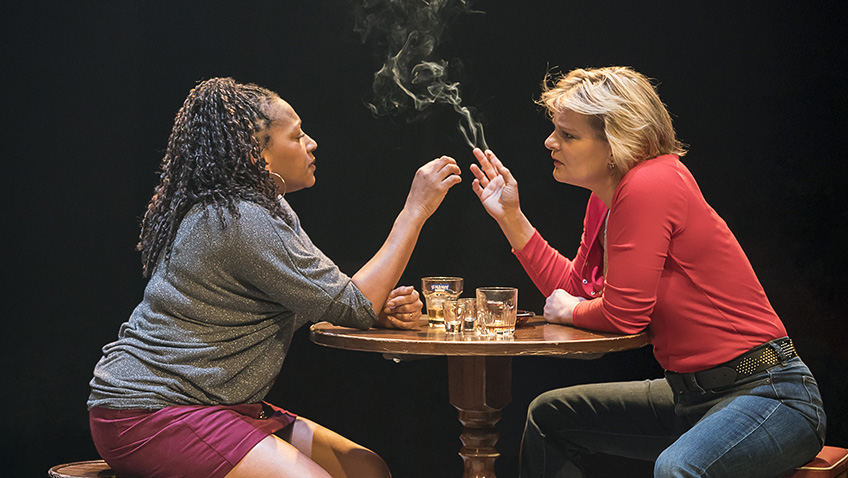 Lynn Nottage’s riveting drama is not to be missed

Lynn Nottage’s Sweat won the Pulitzer Prize in America. I think it is very likely to win prizes in the UK, too. It is totally gripping and emotionally involving.

Nottage interviewed the citizens of Reading, Pennsylvania, over a two-year period. Reading, once prosperous, is now officially one of the poorest cities in the USA.

A blue-collar bastion and a former Democratic stronghold, Reading voted for Donald Trump. 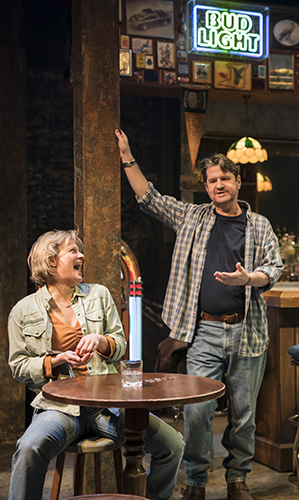 Sweat is about deindustrialisation and the social crisis it brings in terms of unemployment, poverty, racial tensions and violence.

The workers instead of standing together turn on each other. The bullshit put out by politicians and corporations merely increases their anger.

Workers, who have given a lifetime service to the company, are offered a raw deal: a 60% cut in pay, and longer working hours. When they refuse to accept the deal they are locked out of the workplace.

A friendship between two tough, no-nonsense middle-aged women (Clare Perkins and Martha Plimpton), one black, one white, is ruined when the ambitious, hard-working black woman is promoted from factory floor to supervisor, a post she richly deserves but which the whites want to feel she only got for politically correct reasons.

Their respective sons (Osy Ikhile and Patrick Gibson), also good friends, react badly to those willing to do their jobs for lower pay.

The action, set in 2000 and 2008, takes place mainly in a bar run by a very likeable bartender (Stuart McQuarrie) who suffered a severe injury on the factory floor. His assistant is a Columbian (Sebastian Viveros), who wants to be able to have a job with decent pay like everybody else but the factory’s union constantly blocks him.

Sweat, excellently acted by a fine ensemble, excellently directed by Lynette Linton (who is about to become artistic director of Bush Theatre) and excellently designed by Frankie Bradshaw, is strongly recommended.