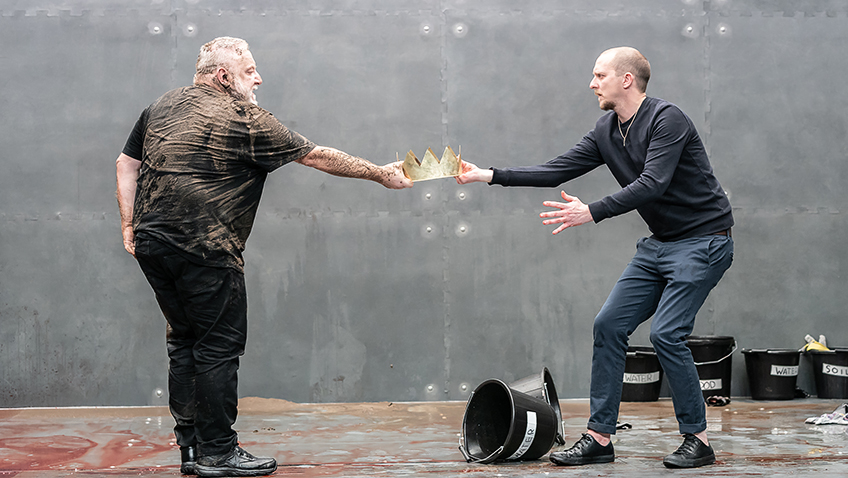 I think I can safely say that this is the worst Richard II I have seen.

If you have neither seen nor read Shakespeare’s history play, I would advise you to give Joe Hill-Gibbins’ production a miss; even those who know the play will find it difficult to follow.

The text has been re-arranged and severely cut. The verse is spoken at speed. There is no poetry. There are only eight actors and they take on so many roles there is no opportunity for characterisation. 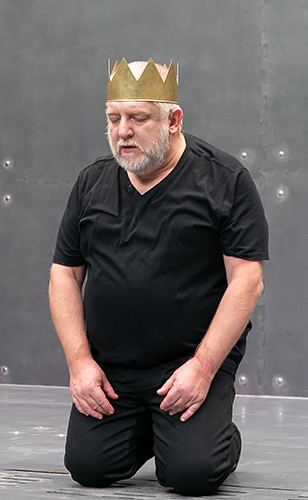 The set is an empty grey steel-box. The actors remain on stage all the time and when they are not hugging the walls there is a lot of artificial movement.

There is no pageantry. The actors wear what they might wear to rehearsal. The only prop is a crown which looks as if it might have come out of a Christmas cracker. There is no mirror for Richard to smash.

There are buckets of water, earth and blood which are regularly thrown over the actors. It’s a messy production.

Richard, who came to the throne when he was 10, always believed he was king by divine right. He loved all the pomp and circumstance of royalty. When he came to manhood, he proved to be too narcissistic, too self-indulgent, too indecisive and too full of self-pity to be effective as a medieval king.

Richard II is a young actor’s role. Richard was 33 when he was murdered in 1400. Simon Russell Beale is 57. Many of his admirers will feel he has left it too late. With his white beard, he looks more like Lear than Richard.

He speaks the arias so well you wish he were in a more traditional and accessible production. He is at his best in the abdication scene.

Leo Bill’s interpretation of Bolingbroke is at odds with the text. He is portrayed as weak and so childish that he is spanked. When Richard teases him (“Here, cousin, seize the crown”) he actually tries to seize it and is humiliated far more than Richard.

Joseph Mydell is given no sick-bed and has to deliver his apostrophe to England and his condemnation of Richard’s reign standing up.

One of the most famous scenes, and based on historical fact, is numerous knights throwing down more and more gages. It can be played quite seriously. Here it is acted for farce and the actors behave like unruly children in a school playground throwing gloves at each other.

If you want to see the play Shakespeare wrote, I would wait for another production.