Home / LIFESTYLE / REVIEWS > / THEATRE REVIEWS / Whether we fall by ambition, blood or lust, like diamonds, we are cut with our own dust 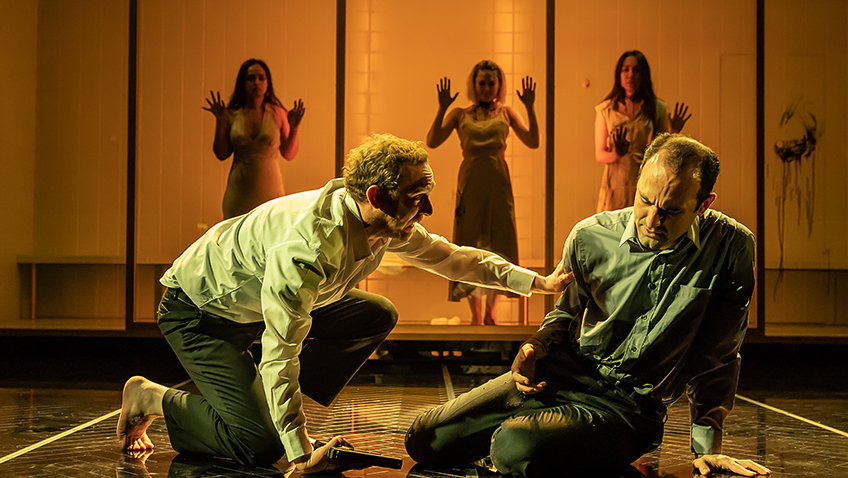 Whether we fall by ambition, blood or lust, like diamonds, we are cut with our own dust

The Duchess (Lydia Wilson), a flirtatious widow, has no desire to be cased up like a holy relic. She wants sex and she secretly marries her decent low-born steward (Khalid Abdalla) and bears him three children. 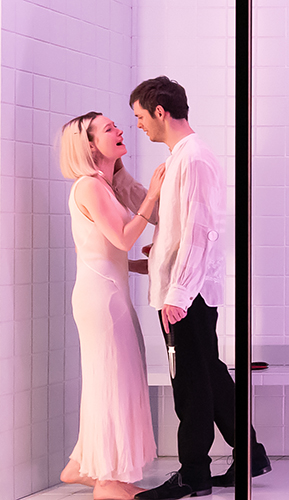 Lydia Wilson and Jack Riddiford in The Duchess of Malfi

When her two brothers (Michael Marcus and Jack Riddiford), find out, they are, to put it very mildly, furious. They had wanted her to marry into an aristocratic family. They hire a killer, the malcontent Bosola (Leo Bill), to torment and murder her.

The Duchess of Malfi, based on a true story and rich in poetry, is acted in modern clothes in Rebecca Frecknall’s production. Initially, it looks as if it might be interesting.

Along the back of the stage is a huge glass cabinet such as you might find in a museum. The actors act and mime in it. They also just sit and stand and observe the action going on.

There are two smaller cabinets either side of the stage. The cabinet contains props, such as knives and poison (to murder with) and apricots (for a pregnancy test).

The first act is pretty bad. The second act is even worse, tedious theatre. There is a lot of howling in the dark. Bosola has the greatest difficulty strangling the Duchess and the finale murders are acted out in slow motion to music by Purcell.

One of the inherent disappointments of the play, for audiences and actresses alike, is that the Duchess dies so early on. Frecknall rectifies this by having her come back as a ghost and having her remain onstage and stalk the other characters. This innovation doesn’t help the play at all.

The major problem, however, is that you never feel you are in the presence of a great woman. Wilson’s Duchess, alive or dead, does not have the nobility and authority. The line, “I am the Duchess of Malfi still,” is thrown away as an aside.

Jack Riddiford plays the deeply disturbed brother, who has incestuous feelings for his sister and goes raving mad. He is, as many actors have been before him, overwhelmed by the role and needs to be reined in.

Michael Marcus, playing the other brother, doesn’t wear anything to suggest he is a Cardinal and he just looks like everybody else. The character’s wickedness is much diminished. In Webster’s play he murders his mistress by making her kiss a poisoned Bible. In this production he merely offers her a drink.