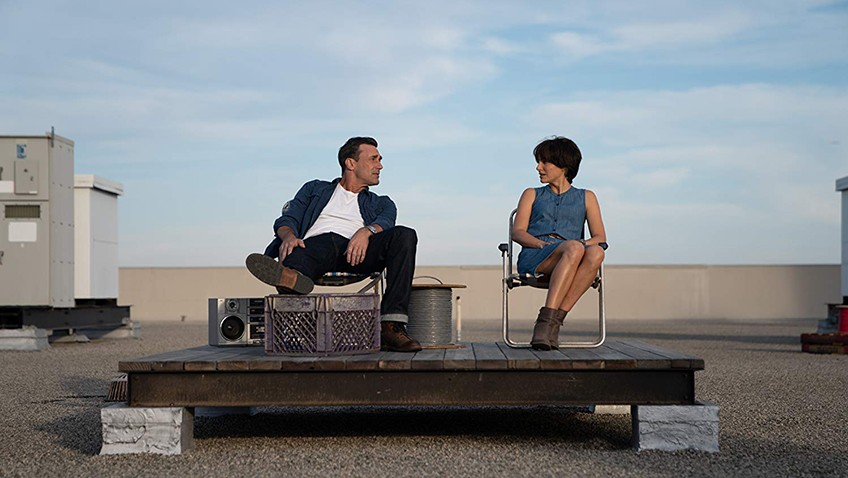 Fixated for the past two years as we have been on the 50th anniversary of the Apollo 11 mission in films like First Man, Apollo 11 and Armstrong, it is easy to forget Discovery mission astronaut Lisa Marie Nowak, who was just six when Armstrong made history on the moon. Or it would be easy to forget, were she not known for all the wrong reasons. In 2007 Nowak, armed with an arsenal of hardware store weapons, drove 900 miles (reportedly, in adult ‘diapers’) non-stop from Houston to Orlando Airport where she was arrested for attempted assault and kidnapping.

Creator of the hit television series Fargo and Legion, co-writer-director Noah Hawley, making his feature film debut at age 50, wants us to remember his fictionalised Nowak, here named Lucy Cola (Natalie Portman), for all the right reasons, but his insistence on sexism is strained and what we tend to remember are the camera tricks and a lack of psychological nuance and dramatic tension when it is most needed. Still, Lucy in the Sky is a great story and a stark warning that it’s not only the moon that has a dark side, but the high-pressure career path to the moon.

When we first see Lucy Cola, it is 2006 and she is spending two weeks in space on the Discovery Mission. Lucy is a brilliant flight engineer, but as she looks down to earth from the rarefied atmosphere of space with a beatific smile spreading across her serene face, she looks like a space tourist. A man’s voice tells her to wrap it up: they are starting their return journey to the Johnson Space Center in Houston. ‘Just a few more minutes,’ she begs like Heidi taking her last look at the mountains.

Lucy returns to her large and comfortable home where loving househusband, Drew (Dan Stevens, in an underwritten role), is preparing dinner for Lucy and her 16-year-old niece, Blue Iris (Pearl Amanda Dickson, from TV’s Legion). Blue Iris is the daughter of her poetry-writing brother described as a ‘dreamer’. At dinner, however, Lucy looks like the dreamer; her thoughts are elsewhere.

Despite Lucy’s impressive academic and professional CV, there are, as we saw at dinner, signs of instability in this motivated, highly competitive astronaut, not the least of which are her appointments with a therapist. Or perhaps Lucy is already missing the big picture, a state of mind expressed in the film technically, (with some curious inconsistency) by using a 240-frame opening when she is in space, and then shrinking that down to a 4:3 TV ratio on earth when she feels constrained.

Lucy has a close relationship with Nana Holbrook (Ellen Burstyn), who told young Lucy that as a woman she would have to work harder than any man – and her work has paid off. ‘Never settle’, is Lucy’s motto. ‘My gran taught me that’ she tells Drew.

We see how badly Lucy wants the upcoming Orion mission during an underwater exercise in the training facility pool. Despite a helmet break that allows water ingress, Lucy is determined to stay under for the maximum time and accomplish the mandatory physical task. After she is ‘rescued’, her supervisor takes her to task for staying underwater with no oxygen for two minutes – and missing three therapy sessions. As a viewer we have to decide if this is a double standard (a man might be heralded as a hero for refusing to quit and accomplishing the exercise) or another sign of impending mental illness. 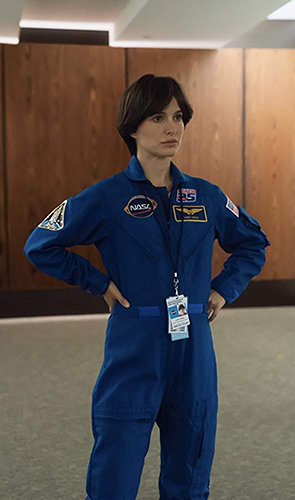 Natalie Portman in Lucy in the Sky

With her faithful husband, perfect record, long workdays, and determination to return to space, Lucy leads an unblemished life and is too busy to fool around. So even she is surprised to begin a rule-breaking affair with fellow-astronaut and practised flirt Mark Goodwin (Jon Hamm).

Naïve, or simply accustomed to reaching goals, Lucy ignores the common knowledge that Mark, a tall, rugged, exceptionally intelligent and good-looking divorcee, is a womaniser and she falls in love. Lucy is soon making up lies when she comes home at all hours, until Drew knows something is wrong in their marriage.

Lucy realises that something is wrong in her new relationship at about the same time. Her only female competitor for Orion is the younger, attractive Erin Eccles (Zazie Beetz). Lucy and Erin become friendly during training and the two make a pact to support one another. When Drew, who is responsible for personnel at NASA in Huston, invites Erin to join them at their table in a restaurant, she is hesitant, mentioning that she is not alone: she is meeting someone. We know, long before Lucy sees him approach the table awkwardly, that that someone is Mark.

Lucy has refused compassionate leave after the death of Nana Holbrooke, for fear of losing out on training. Shortly thereafter, Mark dumps her, leaving Lucy clinging to sanity by a thread. That thread is cut when she is pulled out of the Orion mission – allegedly on a temporary basis – and she loses it after breaking into her supervisor’s files and learns the truth about her dismissal.

Hawley turns this into a male conspiracy, and throughout the film we hear that women have to work harder and be smarter than men. But work has been commended and recognised and her career is on track. Lucy’s erratic conduct seems to be a reaction to the particular nature of her high-pressure job and the lifelong training needed for just several weeks of reward. But this also affects men.

In his autobiography, Magnificent Desolation

, Buzz Aldrin explained his descent into alcoholism and depression after Apollo 11. “I wanted to resume my duties, but there were no duties to resume. There was no goal, no sense of calling, no project worth pouring myself into.” Where Hawley takes the greatest dramatic licence in an otherwise surprisingly close adaptation is in making Lucy childless. In fact, Nowak had three very young children, a fact that only adds to the pressure and to her guilt; to the scandal, and to the scope of the tragedy.

Natalie Portman is such a great actress that she can communicate a host of emotions without the need for DOP Polly Morgan’s subjective camera work. Hawley’s experiments are at times effective in helping the viewer share Lucy’s disorientation, but what the film needs more is suspense as Lucy loses control. What we don’t need are elongated images, or the ‘infinite zoom’, to replicate the idea of someone so focused on her destination that she has no recollection of how she got there. This technique is used to distraction in Lucy’s trip to the hospital to see her grandmother where Lucy and the background look like they are moving independently. This Lucy is already in enough trouble.