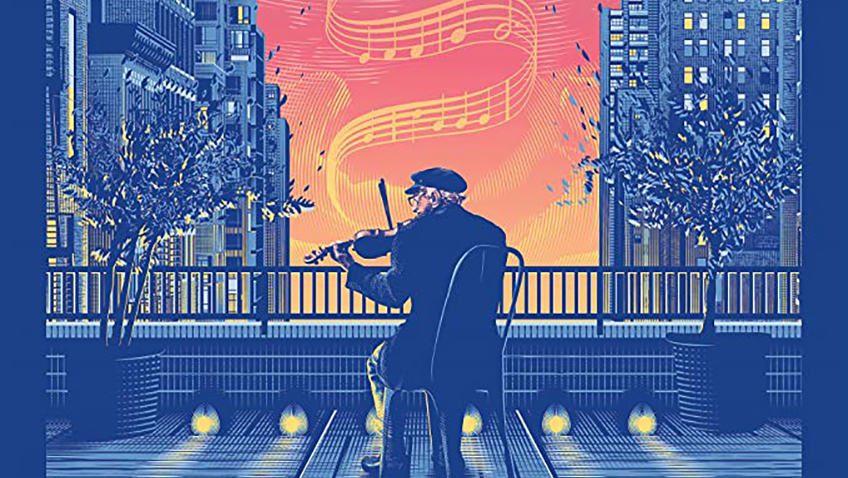 Fiddler on the Roof, which was first performed on Broadway on September 22, 1964 – 55 years ago this year – has not only withstood the test of time, but, as director Max Lewkowicz so convincingly postulates in this entertaining, enlightening and thought-provoking documentary, might just be the most loved, performed and popular musical of all time. And yet, it is a miracle that it was ever made.

Jews make up only .002% of the population and ‘Fiddler’ is about a poor Jewish milkman’s living with a wife and five daughters in a shtetl in the Pale of Settlement of Imperial Russia in 1905. They are persecuted by the Tsar’s Imperial army looking for scapegoats after the unsuccessful first Russian Revolution, and the family is given three days to pack up and leave, many emigrating to America. 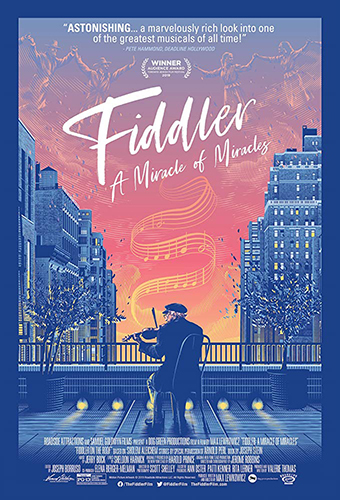 It didn’t sound like a universally relatable crowd-pleaser, let alone an obvious subject for a musical. As we hear in this film that is packed with fascinating anecdotes, engaging interviewees, as well as theatre and social history, it was assumed no one outside the Jewish faith would pay to see it. That Fiddler on the Roof became the longest running musical in Broadway history and has been, and currently is playing somewhere in the world every single day, is another miracle.

Lewkowicz cleverly runs the actual musical in parallel the story of its history: before the first curtain; during its performance, and, as a way of illustrating the various themes and how they have been seized upon by people of all nationalities and religions. It’s a hoot to see the song Do You Love Me, performed in Japanese, but that’s nothing compared to well remunerated Welsh opera star Bryn Terfel or The Motown group, the Temptations interpreting ‘If I Were a Rich Man’. There are clips from productions in Thai and Dutch, as well as from a current sold-out revival in Yiddish directed by ‘Cabaret’ legend Joel Grey. It has apparently saved the fortunes of the Shubert Organization’s theatre ‘Stage 42’, and the management want the 16-week run to be extended indefinitely.

That the film is dedicated to Harold, ‘Hal’ Prince (who died last July at 91) makes this legendary producer an apt starting point. Lyricist Sheldon Harnick is sent a book of stories by Sholom Aleichem called Tevye and his Daughters (or Tevye the Dairyman) and other tales. Tevye’s maintains a dialogue with God as he struggles to maintain his Jewish traditions when his headstrong daughters reject arranged marriages, opting to marry for love, and the Cossacks are burning Jewish villages.

Harnick, and the composer Jerry Bock, had collaborated with Hal Prince a few years earlier, on the 1959 Fiorello! (about the former New York City mayor Fiorello La Guardia. As it won that year’s Tony for Best Musical and was awarded a rare Pulitzer Prize for Drama, Prince was interested. Joseph Stein, who also wrote the 1971 film adaptation, was brought in to write the book.

In 2010, Bock spoke at the funeral of 98-year-old Stein just 10 days before his own death, but Harnick, who is 95, is still alive. Lewkowicz benefits from this, and Bock and Stein’s relatively recent deaths to include clips from interviews with them, including a discussion of how events and trends of the 1960s flavoured the musical.

, the book that launched the Women’s Liberation movement, was published just a year before Fiddler on the Roof appeared. It’s easy to see the connection when Lewkowicz shows a clip of the entire comic song, Matchmaker, Matchmaker.

On paper, Hal Prince’s choice of Jerome Robbins as director and choreographer was a no brainer. Three years earlier Robbins made history with his choreography of West Side Story and two years earlier he directed and choreographed Gypsy. Moreover, Robbins was actually Jewish, although, as his biographer mentions, ‘he had complicated and conflicted feelings about his Judaism.’

But Zero Mostel, who had just won a Tony for Best Actor in A Funny Thing Happened on the Way to the Forum, was already confirmed as Tevye, and Mostel objected to Robbins on ethical grounds. Robbins had named names in the House Un-American Activities Committee, for fear of being exposed as a homosexual.

The play opened in Detroit to disastrous reviews. When asked what he was going to do, Robbins answered: ‘Refine and Cut’. He set to work doing just that, adding the very moving, long-suffering-wife and newly reflective husband duet, Do You Love Me? and cutting one the funniest songs, When the Messiah Comes.

Lewkowicz could have devoted the entire documentary to the stage musical, adding for instance, more detail about Boris Aronson’s set designs, inspired by Mark Chagall paintings, but evolving over the years. But instead he understandably covers the 1971 film version which, somewhat controversially at first, starred Chaim Topal. It was thought that Mostel’s larger than life personality, so perfect on stage, would be too much on film and that his fame would be distracting and obscure the themes.

The critically acclaimed film was nominated for six Academy awards, winning three: in the music categories. The director was Norman Jewison whose civil rights film In the Heat of the Night won an Oscar in 1967. We hear how Jerome Robbins had likened the Jewish experience in Imperial Russia with the Klu Klux Klan attacks going on at the time. (Ironically, Jewison went on to direct The Russians Are Coming!) We hear how the producers were surprised to learn that Jewison was not Jewish but, as if to make amends, he gives himself a cameo as a rabbi in the film.

The late Isaac Stern played the violin solos in the feature film, and, in the documentary, we are treated to a violin serenade by Itzhak Perlman, one of many illustrious interviewees, along with Stephen Sondheim, Calvin Trillin, Harvey Fierstein, Joel Grey and Zero Mostel and his son Josh Mostel.

But best of all is Lin-Manuel Miranda, who wrote the book, music and lyrics for the blockbuster musical Hamilton: An American Musical. Lewkowicz plays a video from Miranda’s wedding in which Miranda, who is of Puerto Rican descent, performs the song ‘To Life’ from Fiddler on the Roof with the wedding party joining in as chorus.

By the end it is clear that the miracle of Fiddler has a rational explanation after all. Its timeless and universal themes and characters transcend ethnicity and any specific historical period to speak to us all.