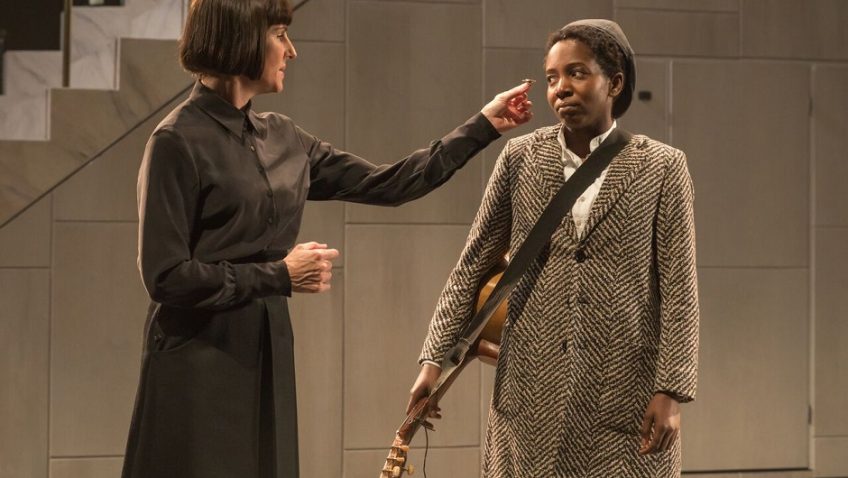 In the 20th century Vesta Tilley and Hetty King were famous for their male roles in the music hall.

Malvolio, the socially ambitious steward, a killjoy Puritan, fantasises about having an affair with the lady of the house, the Countess Olivia. The role, having been turned into a woman, now means that Malvolia has a lesbian crush on her mistress – though this is not developed.

On the handbill and the programme cover is a photograph of Tamsin Greig standing on a staircase in a smart suit, white shirt and high heels and a bottle of champagne at her feet. She looks very elegant

This is what I thought she might transform into after she has read Olivia’s love-letter. Instead she is dressed in a Pierrot costume which she throws off to reveal a showgirl striptease corset and bursts into song, “Please one and please all” as if she were a cabaret artiste. It is so over the top as to be totally unbelievable.

The scene when she reads the letter would be better if those who are gulling her were not so very visible. It’s ridiculous that she doesn’t see them.

Twelfth Night is already famous for its gender and sex confusion. Here it is made abundantly clear that Orsino (Oliver Chris) loves Viola (Tamara Lawrance) far more when she is disguised as a boy than he does when she is revealed as a girl.

Simon Godwin’s production will be understood best by audiences who know Shakespeare’s comedy well and can see, scene by scene, what he has done with it. Godwin’s inventiveness completely upstages the actors and the play.

There is no melancholy streak. The performances that work best are Phoebe Fox’s Olivia and Tim McMullan’s original take on Sir Toby Belch.

Soutra Gilmour’s versatile revolving pyramid set with a huge staircase  provides a variety of settings, including an unexpected night club called The Elephant where a drag queen sings the ”To be or not to be” soliloquy. He should have been given all the songs.