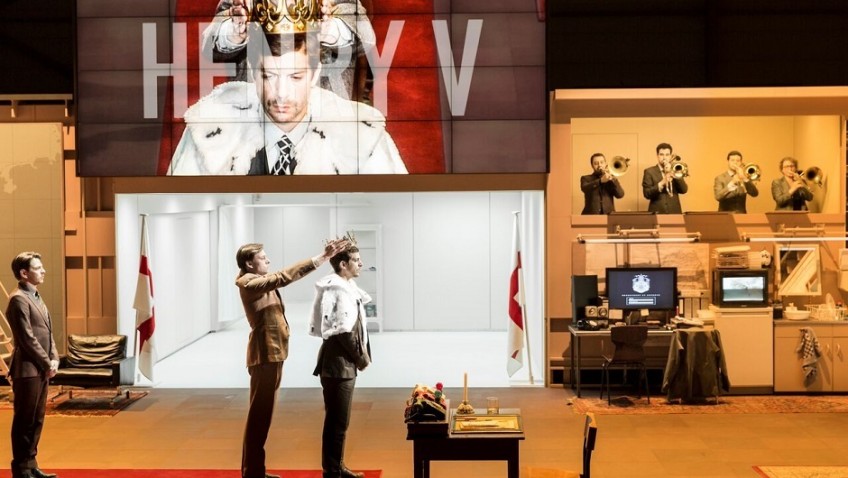 April 23, 2016 is the 400-year anniversary of Shakespeare’s death. One of the many celebratory events taking place is Toneelgroep Amsterdam’s Kings of War, a conflation of Henry V, Henry VI and Richard III, directed by Ivo van Hove and acted in Dutch with English sur-titles. The plays are performed in modern dress. There are 14 miked actors, playing 30 roles, plus 6 musicians. The men are in suits, never in uniform.

The action remains in the same spacious bunker-like war room. Many scenes, and all the murders, take place in a clinically white corridor off-stage and these are shown on film and video.

Texts and characters are ruthlessly slashed. Key scenes are lost. The production lasts a taxing but rewarding four and a half hours, including an interval. There are three very different kings. The only thing they have in common is the coronation ritual on the red carpet.

Henry V (Ramsay Nasr), by modern international laws, could be arraigned as a war criminal. Both his famous speeches, “Once more unto the breach” and his Saint Crispin Day exhortation at Agincourt, are played as propaganda pieces addressed to the nation on television.

Henry VI (Eelco Smits) is too good and too saintly to be effective as a medieval king; and played, as he is here, with his over-large spectacles, he looks comically geeky. Henry says he would be much happier if he was a homely swain and van Hove complements this wish with an image on screen of him surrounded by a flock of sheep.

Richard III (Hans Kestling) is not the usual witty villain. He has no hunchback, no limp; his only visible deformity is a huge birthmark on his face. He is lumbering and creepy, not sexy, and much given to admiring himself in a mirror, acting with his reflection.

He is liable to charge around the stage with the crown on his head and a carpet thrown over his shoulder as a kingly robe and telephone Barrack Obama, Angela Merkel and Vladimir Putin. He remains in the bunker for the Battle of Bosworth with only a metronome ticking away for company.

Apart from the kings, the only other characters who register are the self-serving Buckingham (Aus Greidanus Jr), who gets his comeuppance, and the Princess of France (Hélène Devos), who is singularly unimpressed by Henry V’s abysmal wooing.

Kings of War is a major theatrical event.