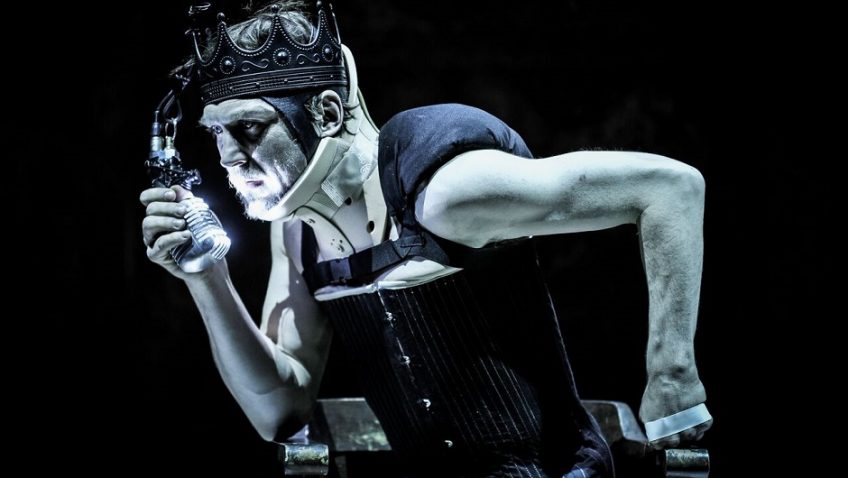 Thomas Ostermeier, artistic director of Berlin’s Schaubuhne, directs Shakespeare’s Richard III. The production is in German and there are English sur-titles. Single-minded, witty, pitiless, murderous, outrageous, Richard always has been popular with actors and audiences. His energy is ferocious. His victims liken him to a hell-hound.

But would Richard exist if the world around him weren’t ready for him?

Would Donald Trump exist if the world around him weren’t ready for him?

Richard is the consummate actor-villain and Lars Eidinger is a charismatic actor who dominates the stage and the audience. Richard is a one-man star turn and nobody else gets a look in.

There is no contemporary context on the political level in Ostermeier’s production.

Eidinger wears a leather skull-cap, has knock knees and a big boot. He regularly speaks into a microphone on a bungee rope. There is a drum-kit on stage to accompany and punctuate the action and allow him to rap away

For the wooing of Lady Anne over the coffin of her dead husband, Eidinger takes off all his clothes and is totally naked. Was woman ever in this humour woo’d? Was ever woman in this humour won? You tell me.

For his coronation Richard appears with a neck brace, corset and underpants. He paints his face clown-white. Meanwhile on the eve of the Battle of Bosworth, the battle becomes part of his nightmare. All alone on the stage he fights invisible soldiers.

There is a persistent low and single note sound going on in the background and the audience is never quite sure if it for real or a fault.  There is a nice joke when Eidinger asks if we can hear it, too?

The two young princes are played by life-size child puppets, which means the puppetry upstages their one scene.

Young people in the audience have obviously been told that Richard III is a very funny play and they often laugh loudly and inappropriately, even when poor Clarence is bleeding to death.

Lars Eidinger stops the play for a Christmas pantomime interlude and has no difficulty whatsoever in persuading the audience to repeat and shout out in unison non-Shakespearian obscenities.