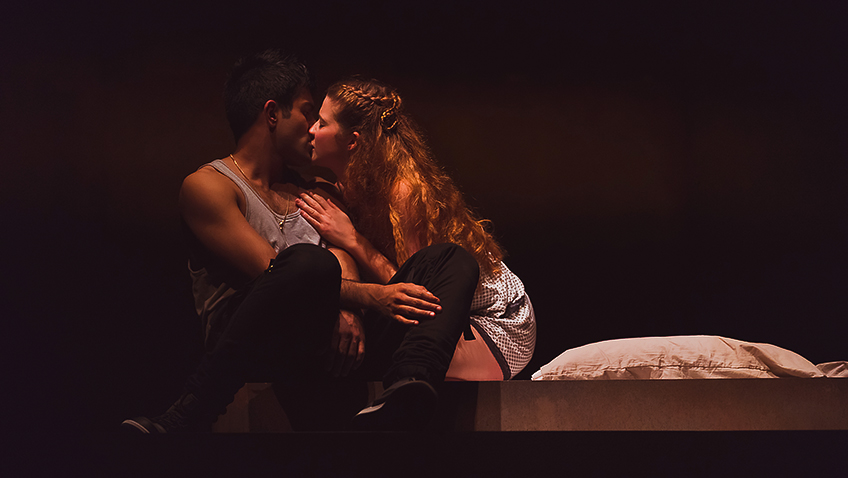 Mercutio, Romeo’s long-time friend, turns out to be a woman!

Knife crime is on the rise in England and Wales. Children carry knives because they fear they will be stabbed. Plus ca change. A programme note reminds us that in the year before Shakespeare wrote Romeo and Juliet, Christopher Marlowe was murdered in a knife crime in Deptford.

Eric Wyman’s production for the RSC is aimed at young audience, the same teenage as the lovers, 13-year-old Juliet and 17 (?) year-old Romeo. 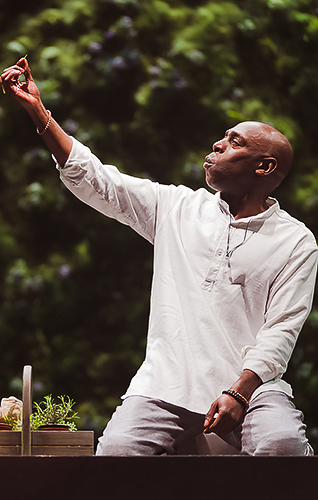 The production gets off to a bad start with a lot of local schoolchildren speaking the Prologue. The speech is divided between them. It’s the diction which is bad. Audiences who go to Shakespeare for the verse should stay away.

The setting is exceptionally bleak, sparse and dreary with a revolving box, revolved by hand, which serves as balcony, bedroom and tomb on top and inside as vestry and apothecary shop.

How I longed for Renaissance Italy! Bally Gill and Karen Fishwick as the star-cross’d lovers deserve a proper balcony.

The RSC is committed to having the same number of women as men in every production. This presents problems because there are far more roles for men in Shakespeare’s plays than there are for women.

The solution is to see how many characters can have a sex change without harming the play. The Prince of Verona’s blistering attack on MEN behaving like beasts has a greater impact when it is said by a woman (Beth Cordingly).

The most striking transformation is Mercutio. There is nothing wrong with casting a woman as Mercutio, but Charlotte Josephine never stops acting and she is physically so over-energetic that she becomes more and more irritating. She delivers the Queen Mab speech badly.

The scene when Juliet takes the drug Friar Lawrence had given her to send her to sleep (and which she worries will kill her) is turned into an extended mime turn to rival Pavlova’s Dying Swan. One of the best moments is the Capulet family’s discovery of her “dead”.

Michael Hodgson’s Capulet is a no-nonsense dad and when Juliet refuses to marry Paris he turns sadistic in language and actions. Andrew French as Friar Lawrence comes into his own when he lectures Romeo on how lucky he is not to be executed and only banished. Josh Finan’s Benvolio leaves nobody in any doubt that he adores Romeo.