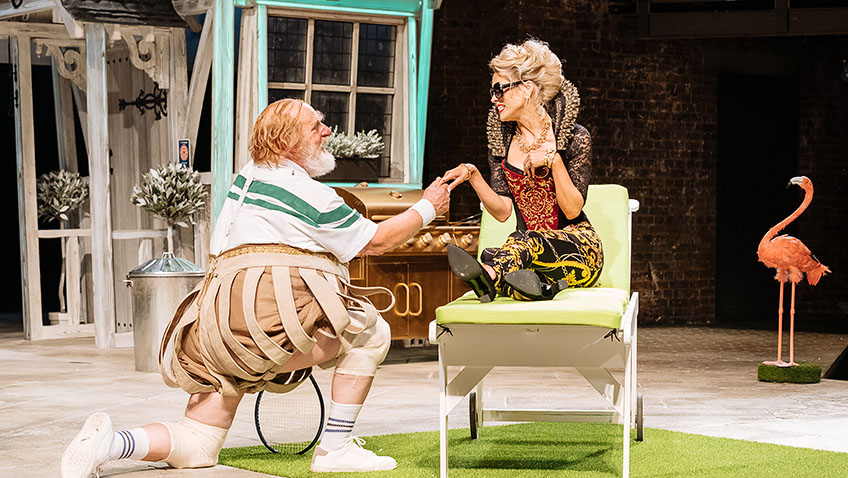 The Merry Wives is perfect for the pantomime season

Fiona Laird‘s production in a prologue instantly acknowledges the tradition that the farce was written at the behest of Queen Elizabeth 1 who expressed the wish to see Sir John Falstaff in love.

The Windsor Falstaff is a fat-bellied imposter, who is duped, not once, not twice, but three times by the two nouveau riche middle class wives he tries to seduce, hoping to cheat some money out of them.

Shakespeare took Falstaff out of the first two decades of the 15th century and put him and his cronies into the then-modern 1590s. 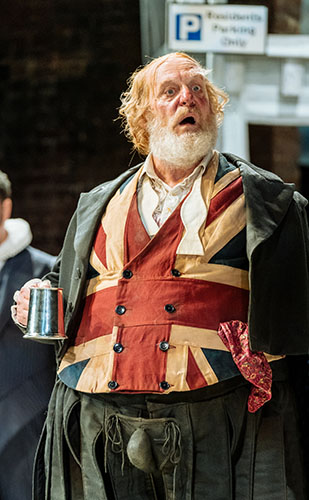 David Troughton in The Merry Wives of Windsor

Laird brings the crude sex farce into the 21st century. Les Brotherston’s set is two revolving skeleton mock-Tudor houses and his costumes are an ugly mix of Elizabethan and modern.

The play, written in prose and said to have been dashed off in a fortnight, is perfect for the #Me Too generation. The merry wives are not only smarter than Falstaff they are smarter than their husbands.

Falstaff, first acted by the great William Kemp, is now played by David Troughton in a fat suit. The largest doublet and hose you have ever seen has an enormous codpiece. The wives, dead common, are played by Rebecca Lacey and Beth Cordingly.

Falstaff is not the only one to be made a laughing-stock. There is a bevy of people, who are humiliated, including an insanely jealous husband, a Welsh parson, a French doctor and a not-very-bright suitor.

They are all caricatured; even the juvenile lead in love is a send-up of a conceited young man who fancies himself as a romantic lead.

There is an innovation when the French doctor, a victim of a marital hoax, finds he is married to a man and is (wait for it) absolutely delighted.

The famous buck-basket, in which Falstaff hides, has been turned into a dirty, smelly wheelie-bin. There is a great joke when the wives, instructing two refuse collectors to throw the contents into the icy Thames, discover they are talking to foreigners who do not speak English.

The Merry Wives of Windsor is perfect for the pantomime season. There is plenty of outrageous innuendo In Shakespeare.