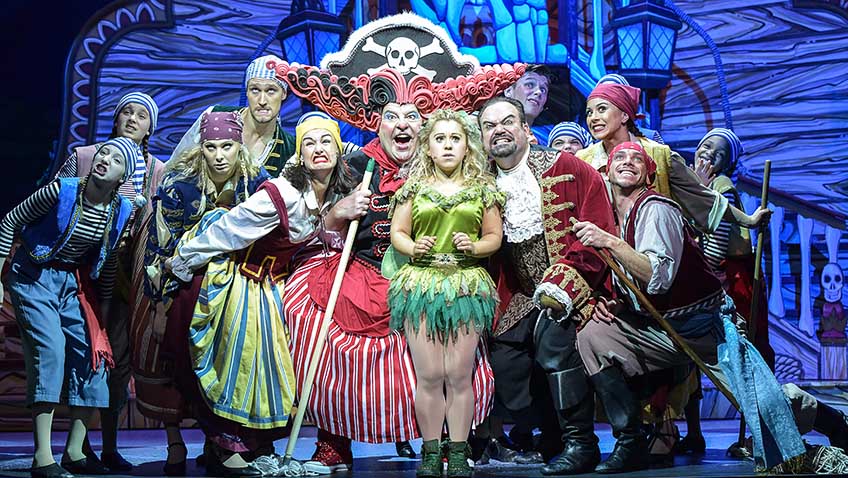 There is nothing like a Dame, especially when it comes to Christmas time and Damian Williams. Peter Pan is Williams’ eleventh panto at Sheffield’s Lyceum, and this year’s Great Dame is – no, not Nana the dog, but big, bold, broad Mrs Smee. Williams’ comedy routines and double act shenanigans with Shaun Williamson as Captain Hook sit at the centre of a production that boasts ongoing, magnificently stimulating spectacles of extravagance and beauty in set, lighting, effects, and scrumptious, sumptuous costumes.

As we travel from classy Victorian home to Neverland jungle island or aboard Hook’s cut-out pirate ship, Helga Wood’s Dame costumes not only fulfil the criterion of being over the top; they are also creations of bright, tasteful beauty. A yellow, duck-bedecked, baby-bubblebath-Brexit dress is first on; it’s one that everyone wants Mrs Smee to get out of, yet as soon as she’s out of it, they’re all clamouring for her to get back in! Yes, jokes and puns, topical, ancient and modern, fresh or clapped out, are thrown in by the bucketload, one five-minute routine based on fruit and veg providing a barrowload all on its own. Williams’ adlibs when odd things go slightly wrong onstage particularly connect with the audience (though his over-the-top advertising of the show’s sponsor may split opinion.) 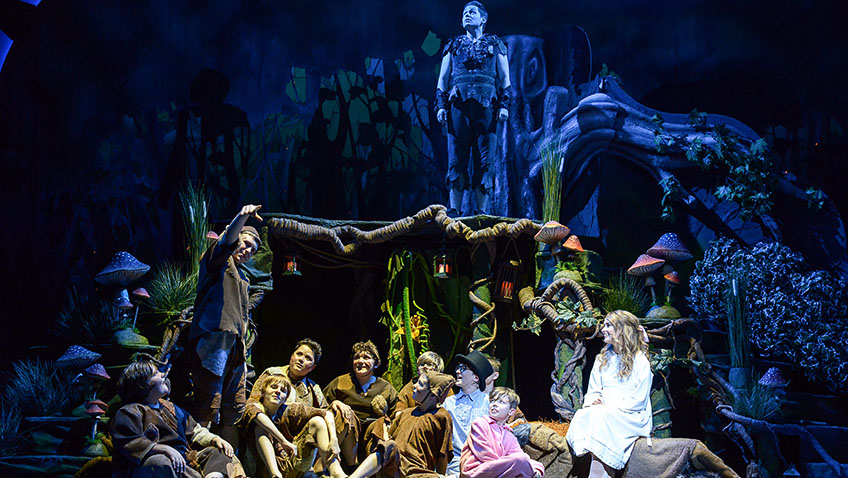 The cast of Peter Pan

Subtleties of relationships and characterisations, and the sadder, quieter aspects of the story are not dwelt upon and are largely bypassed, but the audience enjoy a good time. Their Peter Pan is not one of those willowy, thigh-slapping types in tights but children’s presenter David Rabi from Milkshake! A slightly more grown-up-looking, weightier version. The flying is wonderful as Peter and the Darling children rise on high before a full-screen backdrop of starry skies and large-scale, zooming London landmarks. Because of the circle overhang, though, those in back stall seats see, at times, just flailing legs and decapitated Darlings, and later only the bottom half of the pirates’ join-in sing-a-long song! Well, you can’t have everything!

Shaun Williamson is naturally the butt of one or two Eastenders jokes, but as Eton-educated Captain Hook, he tones down any scary evil to a lowish fright level while still getting the boos. Ethel the Over-acting Pirate (Emily Watkins) gets the kids aha-ing, CBBC’s Gemma Hunt leads their rivalry in song as Tiger Lily, and Wendi Peters doubles admirably as posh Mrs Darling and the loud, brash, deep-voiced Northerner Chief Squatting Cow. As Indians and Lost Boys, two squads of local youngsters perform like pros on the acting / singing / dancing front alongside sweet, little, prawn-pink Michael, night-shirted John (‘like Harry Potter in a dress’) and their big sister and surrogate mother Wendy. 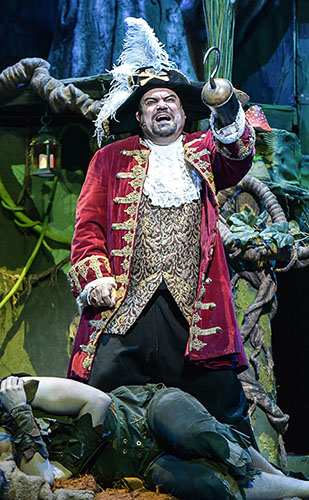 The snatches and bursts of song are pretty eclectic with something for everyone (though a razor-wielding Sweeney Todd does spring inappropriately to mind at each reprise of the lovely Sondheim ballad Nothing’s Gonna Harm You.) While the Diamond Acrobats of Tanzania wow the crowd with their fiery, towering skills, a wandless Tinkerbell is saved from death because even a bloke in a loud shirt in the front row is willing to yell that he, too, believes in fairies, and this being Sheffield, the Tardis whirls through space to materialise onstage before our very eyes, the worthy Dame temporarily transformed into the blond Doctor.

It’s bright, flamboyant and beautiful, and while the it’s behind you! and oh, yes it is! rituals may be a bit overly slick and polished, rather than entirely heartfelt, spontaneous and engaging, JM Barrie certainly won’t be spinning in his grave. He’ll be enjoying it along with the rest, pleased to be helping out GOSH (Great Ormond Street Hospital) yet again.