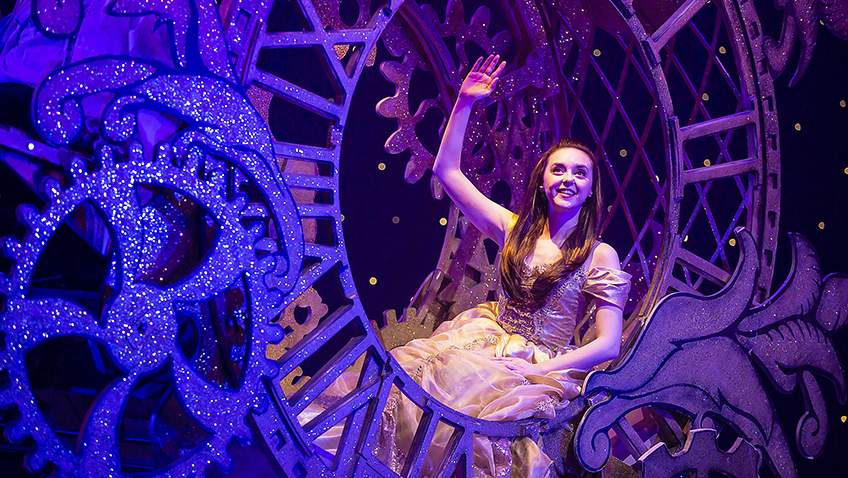 With the panto season underway, stalwart panto-goers countrywide are out in force, all fired up to get overexcited, interactive and very, very loud. Last year in Sheffield, it was Tinkerbell and Jingle Bells: this year it’s decibels, decibels all the way.

Directing the pounding music for Sheffield’s Cinderella (a lass so mistreated that her picture doesn’t even feature on the front of the programme with the other characters) is MD/keyboardist James Harrison, whose frenetic enthusiasm has him in constant danger of tumbling headfirst into the auditorium from his theatre box as he revs up his turbo-charged band, located in the boxes opposite. As the drummer lets rip behind a transparent screen, the chaps on guitars, saxes and flute are up and rockin’, lines are loudly delivered, and the audience is whipped into frequent shouting/clapping frenzies. All ensures volume and pace rarely flag, with a conga and a sing-along thrown in for good measure. 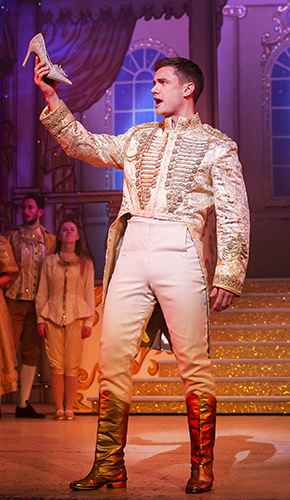 The designers’ overtime all pays off with a glorious set and costumes. From snowy woods with Christmas card glitter and Olde Worlde shops and fair stalls to drab kitchen or shiny, golden palace, every scene is beautiful. Ditto the myriad outfits ranging from strictly traditional to strictly modern and on to downright dazzling. Even Cinderella’s “rags” are more smart casual than hint of tatters, while the Panto-Dame extravaganzas earn top marks for being outrageous yet beautiful in incorporating diamante skulls, crazy tartans, zebra stripes, lamp-stands, lampshades, the synthetic, green fur of a deceased Orville, and many a weird and wonderful shape and arrangement of bosoms. The Donaldina/Melania double act of Damien Williams (now on his 12th Sheffield Dame) and award-winning Dame, Matt Daines – one little, one large but both larger than life – is a big hit, and the annual rituals of ghost-bench routine and the wheeling on of a literal cartload of groan-inducing puns have regulars in raptures, easily ensuring they Always Look on the Bright Side of Life. By the final encore they’re on their feet and going wild!

In this PC age of pantomime, it’s established early on by precocious, mouthy, 8-year-old feminist flag-waver Mildred (Tillie Copley of the excellent singing/dancing Purple Team) that Cinderella is (of course!) a feisty, spirited individual who cooks only when she fancies and needs no man to “look after her”. Traditional fairytale elements thus cast out and social media references tossed in, Paul Hendy’s Cinderella hardly lifts a finger, and far from a life of endless skivvying and being cruelly put-upon, she just suffers some mild mocking and stylised meanness from her ugly half-siblings. Evelyn Hoskins is a sweet, sweet, nice, nice, happy, happy Cinders. No surprise, then, that it’s rejected sweetheart, Buttons, who wins all the hearts and sympathy, CBeebies’ Mister Maker, Phil Gallagher, creating a warm, intimate rapport that has the audience rooting for him all the way. 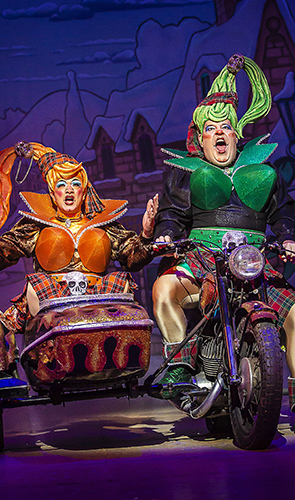 A video Paul O’Grady as Fairy Superior adds a special touch, and for full-on pizzazz there’s some proper “Strictly” dancing with rough diamond fairy godmother Joanne Clifton, and the Uglies, dressed as Twice Daly and blinded-by-the-hair Claudia Winkleman. Superb strut and balletic stretchiness come from a smiling, charismatic Lewis Herring, a dazzling gold coach and horse ride up into the air, but topping all, on ropes of floating silk come the stunning aerial acrobatics of Duo Fusion UK. Provoking gasp after gasp of genuine amazement, their elegant grace and ambitious, gravity-defying moves rival the great Cirque du Soleil. Sung below, the romantic duet of Cinders and Prince Charming (a Prince who, naturally, doesn’t sweat) goes largely unnoticed! Cinderella’s This Is Me solo offers no distractions, though, and earns more appreciation, as do the excellent ensemble and Ben Thornton in Boom, Shake the Room! (in spite of Thornton’s Dandini being far too poshly spoken to fit the requirements of the script).

Laughs, groans, shouting, interactive silliness and sumptuous artistic elegance make this Sheffield Theatres-Evolution Productions Co-Production a big success. Yes, and the ghosts were behind them. OH! Yes they were!