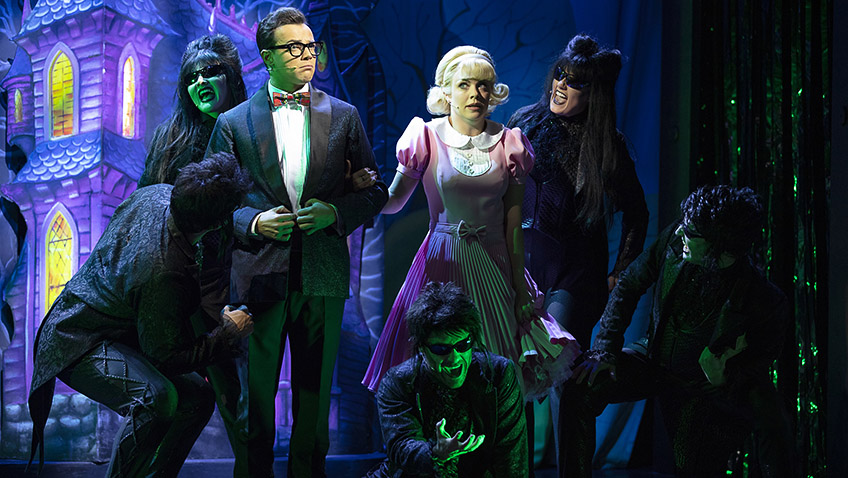 Since 1973, the wacky, salacious, ludicrous naughtiness that is Richard O’Brien’s transgender-bending extravaganza, The Rocky Horror Show, has continued to wow audiences the world over. Forty-six years on, punters still raid their cross-dressing-up boxes to flock to the theatre in sexy suspenders, glittering hats, bizarre basques, outrageous wigs and operating gowns of creepy green. At the drop of a hat, a frothy feather boa or the slightest innuendo, they’re as eager as ever to get heckling and to stand up and do The Time Warp again – and again – and again.

In this production, the storyline feels somewhat swallowed up in the polished ritual of the piece while the chemistry, charisma and conviction of the characters are not as strong as they might be, yet the fun and thrill of it all still win through. Brad and Janet (Ben Adams and Joanne Clifton) are not as engaging and convincing together as some pairings are as they journey from devoted innocence to guilty depravity, but their singing and melodic harmony are great. Kristian Lavercombe’s wonderful nasal singing is just the job for his long-haired, lurching, hunched and awkward Riff-Raff – not surprising when he’s played the part more than 1400 times! While Stephen Webb is big, bold Frank N. Furter, the sweet transvestite from transsexual Transylvania, who has delicious depths to his singing, Callum Evans plays his latest creature creation, muscleman Rocky, dressed, of course, in nothing but leopard-print briefs and a pair of golden boxer boots. The outstanding muscles of hugely accomplished acrobatic gymnast Evans result in outstanding muscleman poses and in astounding back-flips, cartwheels, somersaults and balances. Katie Monks whole-heartedly embraces her understudy role as Columbia with dancing, singing and acting skills that are vibrant and impressive while Laura Harrison doubles delightfully as Roxy the Usherette and the dark Magenta. The energy of the entire ensemble of cavorting freaks and writhing, black-clad Draculine vampires, meanwhile, never lets up. 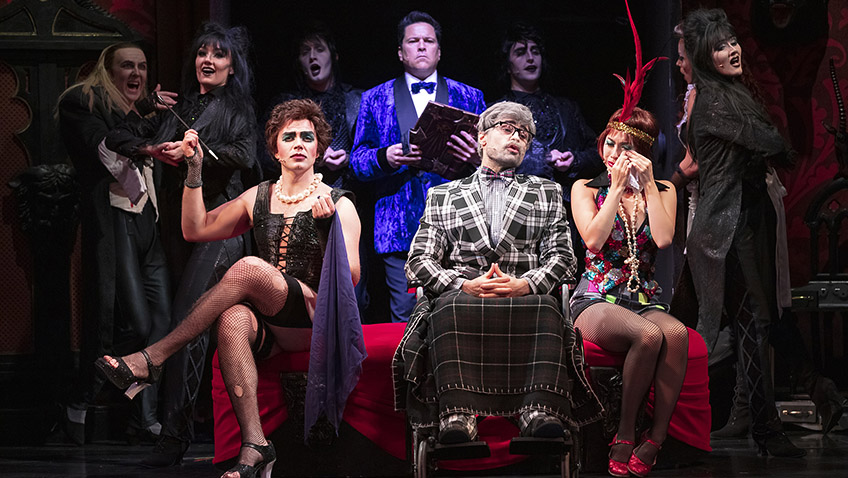 As ever, Nick Richings’ blazingly beautiful, breathtaking light shows add verve and wow factor excitement from start to finish, smoky clouds wafting magically across streams of dancing colours that light up swathes of glittering, metallic strips to mind-blowing effect. George Carter’s musicians make a superb contribution, too, contrasting the throb and pound of rock with delicious moments of exquisite delicacy, especially from keyboard and sax. Hugh Durrant’s set is another thing of beauty, its luxurious crowning glory achieved through a long, winding filmstrip band, artistically wreathed on high, behind which the five musicians play. Becoming overly pat, overly polished and overly stylised in every department, though, is probably best avoided. Pristine props and decor naturally draw great admiration, but they do lack the added hilarity provided by the more makeshift, ad-hoc style of some former productions.

O’Brien’s wild, wacky spoof sci-fi-horror romp with its camp, gender-bending characters, all too keen to indulge in unflinching lewdness and depraved carryings-on, was always meant to be ‘like an alternative pantomime’, just ‘a bit of fun’. This outrageous, exciting, astounding spectacle remains all that and more, and the armies of faithful fans will enjoy every ridiculous minute!