Home / LIFESTYLE / REVIEWS > / THEATRE REVIEWS / The choreography, much of it jerky and restless, shapes splendidly to Prokofiev’s score 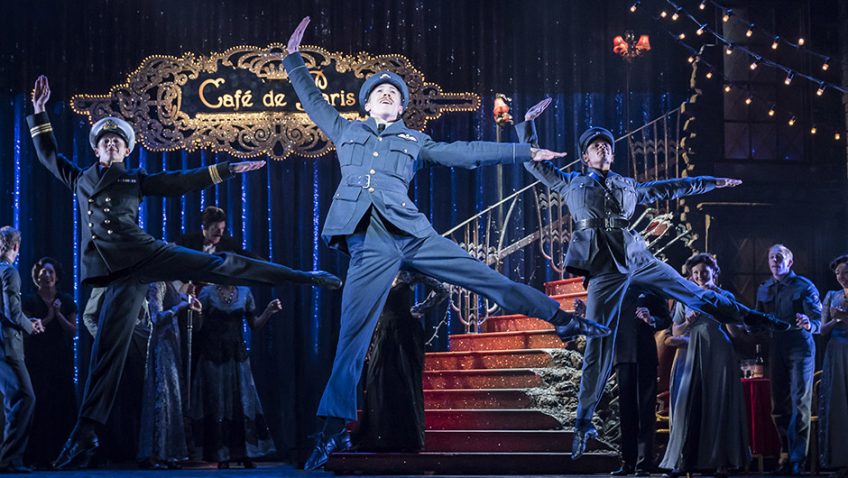 The choreography, much of it jerky and restless, shapes splendidly to Prokofiev’s score

Loud exhilaration rang out following the finale of Matthew Bourne’s Cinderella as folk applauded the exciting dance-drama and the pristine, surround-sound of Prokofiev’s wonderful music. They cheered, too, in huge measure, for the infinite beauty and eloquence of Les Brotherston’s super-superb set and costume designs.

Bourne’s Cinderella story, choreographed first in 1997, revived in 2010 and again last year, boasts many an element we certainly didn’t hear at our mother’s knee – or anywhere else. For a start, it’s set in London during the WWII air raids. Wartime Pathe news footage in black and white sets the scene at the outset, immediately blending fantasy with reality, a reality in which multi-faceted characters and realistically flawed heroes abound more readily than in fairytales. Yes, sweet Cinders has two selfish, spiteful stepsisters, a disconcertingly murderous, bottle-hitting stepmother, and an ethereal guardian-angel who keeps mysterious watch over her. But now she has gained a boisterous, young stepbrother, a gay stepbrother, a creepy, shoe-fetishist, pervy stepbrother, and a bullied, broken father in a wheelchair. Her ‘prince’ is a dashing, yet wounded and traumatised RAF officer. Plenty of scope for comedy and emotional drama alike, then, though the storyline does get a little smudgy at times, and the terrible sisters never do get to try on those sparkly shoes.

A movie style grandness plays throughout, with deliberate hints of Brief Encounter and old war films, a grandness created largely by Lez Brotherston’s remarkable set and costumes. His many shades of grey (fifty? definitely not!) emphasise the lack of colour in wartime life and film, yet primarily express a tasteful, quirky elegance and artistic beauty, whether in the family’s home, in St-Paul’s-with-gasholders skylines or in the rubble of London’s buildings. Every window is a thing of beauty, while the jaunty, sloping mantelpiece is literally unparalleled. 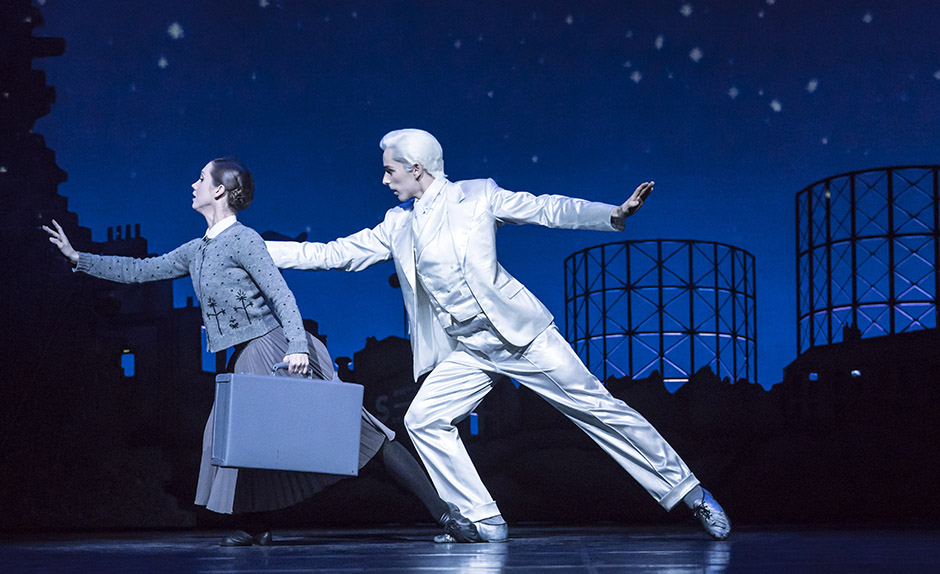 Lighting and sound effects from Neil Austin and Paul Groothuis combine splendidly with visual spectacle, creating drama and atmosphere in every scene: searchlights pan the skies; planes fly over; a Tube train flashes past flashing rent boys and prostitutes at a station; a train pulls into crowded Paddington; the Thames flows across the stage; rain falls; burning buildings tilt, then tumble into artistic rubble as bright, flickering flames engulf them and startling explosions bring the house down, again quite literally. On dance night at the Cafe de Paris, though, it’s all bright lights and sparkle as reds and blues blaze forth and a silvery glitter ball turns. The fact that the real Cafe de Paris in Mayfair was destroyed in the 1941 Blitz, however, does not bode well for the divinely silver-clad Cinders and her handsome beau.

The choreography, much of it jerky and restless, shapes splendidly to Prokofiev’s score, the music, pre-recorded in 2010, cut for the first two acts but intact for the third. That the composer wrote Cinderella during the violence of WWII is what inspired Bourne’s dance version. Full of characteristic Prokofiev bounce, soaring beauty, verve and percussive punch, the music inspired cartloads of innovation in Bourne’s intense, powerful drama: dogs dance in gas-masks, ARP wardens dance with torches, medics with hospital screens, while we travel to the moon and stars with Cinders and her Fairy Angel on a white motor-cycle with sidecar. The superbly integrated ensemble, their acting and expression fabulous, creates an entire city peopled by thugs, spivs, service folk, Sally Army tambourine bashers, prostitutes, rent boys, workers and posh folk. While clad in uniforms, suits and long skirts (apart from Cinders on the morning after the night before!) which hide a great deal of body shape and expression, the cast keep the stage alive with dance.

The audience especially appreciate Liam Mower’s magnetic Svengali magic and wide, expressive dance as the silver-suited Angel, he who keeps popping up like Marty Hopkirk – deceased. They love, too, Madelaine Brennan’s lithe, elegant, yet demented stepmother, Dan Wright’s pervy stepbrother, Andrew Monaghan’s pilot-prince, Harry, Ashley Shaw’s dainty yet tough Cinderella and, indeed, all the characters. The pas de deux in which Monaghan transforms, Coppelia-like, in Shaw’s arms, from tailor’s dummy to real life and back is particularly enjoyable.

In today’s world of 24/7 verbal bombardments, a word-free drama, full of intrigue, intensity, charm, beauty and thrilling music and dance, is all the more welcome and wonderful – even if it’s set in a war.

The show goes from Sheffield to Glasgow and Woking