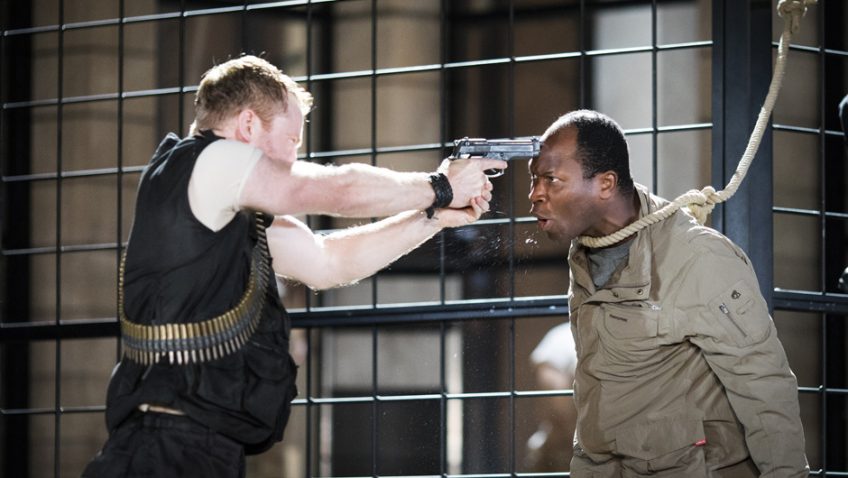 A Roman bloodbath at the Barbican

Titus Andronicus, the least performed of all Shakespeare’s plays, dismissed by Ben Jonson as “blood and thunder,” was extremely popular in its day. The action, based on Seneca and Ovid, has no historical foundation and is an unremitting cycle of sensational and grotesque atrocities.

When it was revived after a long absence by Peter Brook and Laurence Olivier in 1955, extra members of the St. John’s Ambulance Brigade had to be brought in. Audiences, not used to seeing such graphic horrors, were fainting all over the place. The best production I have seen is Julie Taymor’s film set in Mussolini’s fascist Italy. Blanche McIntyre’s modern production takes far too long to get started. All that aimless running around in jeans is totally unnecessary

Rome, under the leadership of the veteran General Titus Andronicus (David Troughton), has triumphed over the Goths and the eldest son of Tamara, Queen of the Goths, is sacrificed to the gods by the victors.

This religious ritual sets off a nightmare of cruel, demented revenge. Heads and hands are chopped off. Throats are slit and tongues ripped out. Women are raped and mutilated. Men are castrated and buried alive.

The piece de resistance is the dinner party at which Titus (dressed as a chef) serves up the flesh of Tamora’s kinky sons (who had raped his daughter) in a pie he has baked specially for her.

Titus lost 22 sons in the battle with the Goths. He kills his youngest boy for disobeying him. His daughter is raped. His remaining sons are framed for murder. He is persuaded to sever his own hand to save the boys from execution only to find they had already been executed.

Asked by a good friend, why he is laughing Titus (Lear-like in his grief and madness) replies he has no more tears to shed.

Aaron (Stefan Adegbola), Tamora’s Moorish lover, a villain who enjoys his villainy, goes to his death, confessing he has no conscience, boasting of his misdeeds, repenting any good deed he may have done by mistake, and regretting that he cannot commit any more crimes. His sole redeeming feature is his love for his new-born son, who, contrary, to the audience’s expectation, is one of the few people in the play who doesn’t die.

A public familiar with ethnic cleansing, genocide, terrorism and Throne of Kings, should be able to take the play in their stride. The bloodbath dinner party is so over-the-top that all an audience can do is laugh in self-defence. The extra­ordinary thing is that alongside all the sick-making barbarity there should be so much fine poetry.

Titus Andronicus is part of the RSC’s Roman season and is running in repertoire at the Barbican with Julius Caesar and Antony and Cleopatra until 20 January.