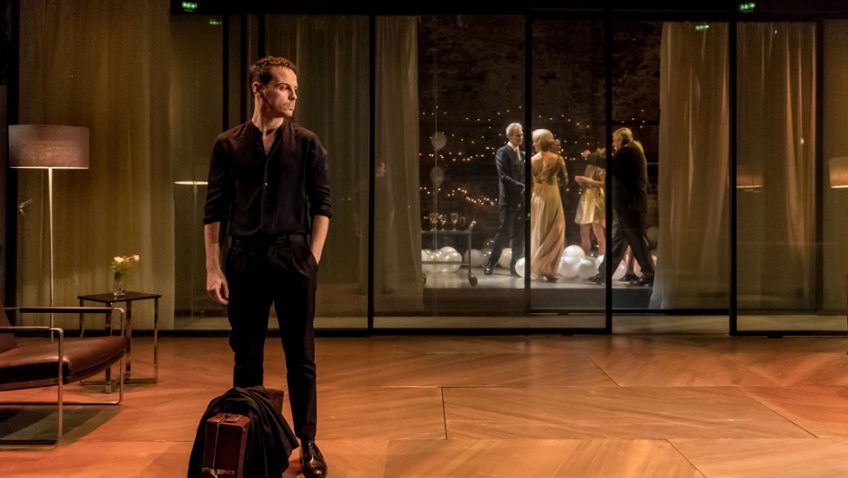 Andrew Scott’s brilliant take on Moriatry, the arch enemy of Sherlock Holmes, on TV, has made lots of regular theatregoers and people who do not normally go to Shakespeare, eager to see his Hamlet.

Scott’s softly spoken conversational Prince immediately has a rapport with the audience. His intelligent performance is always interesting and Robert Icke’s modern, intimate and domestic production is full of original insights. Icke is not afraid to take the action slowly. The performance lasts four hours with two intervals.

The songs of Bob Dylan are put to good use and key events, such as a royal funeral and the war with Norway are reported on Danish television news.

David Rintoul’s Ghost initially does not make his appearance on the battlements but on CCTV where he is seen prowling the dungeons of Elsinore Castle.

Peter Wight’s Polonius has a wire in his lapel and in his scenes with Hamlet he reports directly to Claudius who is off-stage.

Jessica Brown Findlay’s Ophelia, who is seen gratis having a bath with Hamlet, ends up mad in a wheelchair.

Angus Wright’s Claudius does not confess his sins to God. Instead he confesses to Hamlet who is holding a revolver. So why doesn’t Hamlet shoot him?  In the text the excuse he gives for not killing Claudius is because he is praying and he is worried he won’t go to hell.

The Court sits in the front row of the stalls to watch Hamlet’s Mousetrap play and we in the audience can watch the royal family’s reactions video photographed on a big screen.

Claudius walks out of in the middle of the performance with the result the Mousetrap comes to an abrupt stop and there is (an Icke joke) an awkward interval.

Hamlet’s letter to Horatio, relating how Claudius arranged for Rosencrantz and Guildenstern to murder him, is shown by Horatio to Gertrude, an Icke invention.

Juliet Stevenson’s Gertrude is so shattered that later, during the duel, she deliberately drinks from the poisoned goblet knowing full well it is poisoned.

Shakespeare final scene has also been completely rethought by Icke. The Ghost appears and all those who have died during the play join him in heaven.