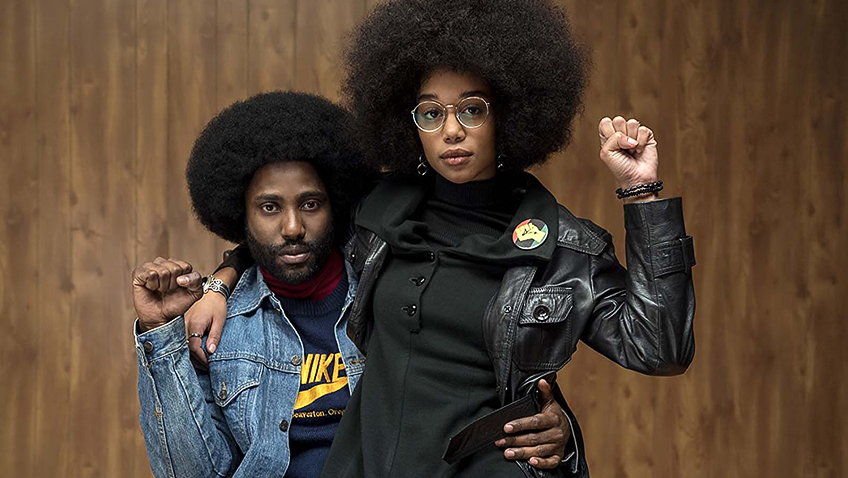 BlacKkKlansman (Focus). Racism is rampant in certain states in America. Spike Lee’s trenchant, politically provocative, anti-white supremacist movie has its partial basis in a true story. In 1973 the first Afro-American detective (John David Washington, son of Denzel Washington) in the Colorado Springs police department infiltrates the Klu Klux Klan, becomes a card-carrying member and meets and exposes a KKK leader (Topher Grace). He is able to do this by recruiting a white cop (Adam Driver) to impersonate him and meet members, who are amusingly satirized. The film begins with racist statements plus clips from Gone with the Wind (the famous tracking shot of the wounded in Atlanta) and Birth of the Nation (which led to the rebirth of the KKK). It includes Harry Belafonte recounting the lynching of Jesse Washington in 1916 and ends with the riots in Charlottesville in 2017 and Donald Trump’s statement about there being good and bad on both sides.

Black ’47 (Altitude) is set in Ireland during the Great Famine in 1847 when millions of Irish were dying of starvation and the cold. The landscape is harsh and bleak. The action is cruel and violent. An Irishman (James Frecheville), who served in the British army abroad, comes home to find his mother, brother and nephew dead and goes on a murderous rampage to kill those he holds directly responsible. He is hunted by the Brits (led by Hugo Weaving and Freddie Fox). Stephen Rea is their tracker guide. Lance Daly directs one of the best films of the year. The brutality is such that you might feel you are watching a Wild Western directed by Sam Peckinpah and Clint Eastwood.

Faces Places (Curzon Artificial Eye) is a charming, quirky sociological documentary by the legendary French New Wave director Agnès Varda and street artist JR who flyposts prints in large formats. They make a delightful, playful odd couple: she is small and 90 years old; he is tall and gangling, wears dark glasses all the time and is 35. They travel in his van, a mobile photo booth, searching countryside and seaside for walls. There is no plan, no story, just places and people, farmers, ex-miners, goat-keepers, a bell-ringer, a waitress, factory and dock workers and their wives. The sites include houses, barns, whole streets, passageways, water towers, trains, crates piled high and a World War 2 bunker. The monumental prints look great. The most moving moment is when Jean-Luc Godard, having promised to meet them, fails to turn-up.

Christopher Robin (Disney). Marc Forster, who paid homage to J. M. Barrie and Peter Pan in Finding Neverland, now pays homage to A. A. Milne and E. H. Shepard whose drawings are lovingly recreated. The film, a bitter honey sweet nostalgia for lost childhood, is aimed at adults rather than children. Christopher Robin (played by Ewan McGregor) is now grown-up, married and with a daughter he neglects. He is an efficiency expert in a luggage firm which is facing bankruptcy. The scenes he shares with Winnie-the-Pooh (the silly old bear, voiced by Jim Cummings) are perfectly judged. The film has a big heart.

Yardie (StudioCanal). London is in crisis at the moment with gang issues and knives. Black teenagers are being killed every day. Actor Idris Elba, making his directorial debut, looks back to the volatile 1980s and gang warfare then. A Jamaican gangster (Aml Ameen), living in Kingston, is sent to London by his boss (Sheldon Shepherd) to sell a kilogram of cocaine. He is determined to avenge the murder of his brother. The film, based on Victor Headley’s cult novel, is aimed at Afro-Caribbean audiences and non-African Caribbean audiences are going to find it very hard to understand what actually is being said. All the characters speak a Jamaican patois and there are no sub-titles (Yardie among Jamaicans means a fellow Jamaican. In the UK it means a member of a Jamaican or West Indian gang of criminals).

The Square (Curzon Artificial Eye). Ruben Östlund directs a Swedish film about fear and trust and society’s lack of humanity towards refugees, beggars and the disabled. The script is also a satire on the art industry and its PR efforts to promote an exhibition with an offensive video. The self-centred museum director (Claes Bang) is out of touch with the community. The high spot is a performance artist (Terry Notary) pretending to be a gorilla at a benefit banquet for the museum and giving the wealthy donors a nasty shock.

A Fantastic Woman (Curzon Artificial Eye) is a Chilean drama directed by Sebastián Lelio which shows the kind of discrimination and abuse transgenders have to suffer verbally, physically and psychologically. A night club singer (who works as a waitress during the day) is in bed with her lover, a much older man, when he dies suddenly. His ex-wife and children do not want her to attend either the wake or the funeral. She is also viewed with suspicion by police and doctors who humiliate her. Daniela Vega as the persona non grata looks exactly like one of those formidable resilient women survivors you find in movies by Pedro Almodovar.