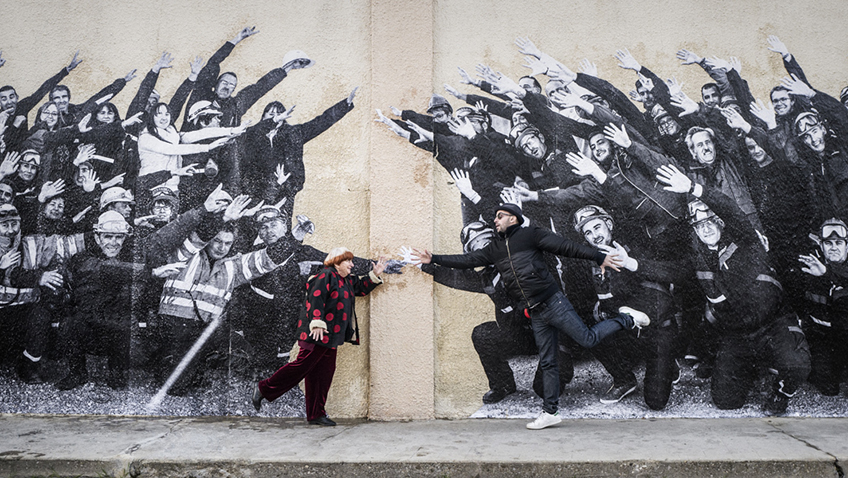 , a fun but profound and uplifting journey through lovely French villages made in conjunction with 33-year-old site-specific photographer JR. In an amusing prologue the two speculate on all the places their paths might have crossed if fate had intended them to while clever little scenes show how the destined meeting was inadvertently obstructed. Then in 2015, JR visits Varda in her Rue Daguerre home and invites her to meet his team at his office. The decision to take to the road in JR’s mobile photographic studio (that looks like a giant camera) was inevitable.

Though the idea is to immortalise the farmers, waitresses, factory workers and bell ringers of France with JR’s larger-than-life photographs plastered on a variety of surfaces, Varda (The Gleaners and I, Jacquot de Nantes, Vagabond) began her career as a stills photographer and her memories and old photos contribute to the rich tapestry of the journey. An old photo of her former assistant, model and friend, the late fashion photographer Guy Bourdin, ends up on the side of German bunker on the shore between Saint Aubin and St Marguerite.

Part of the French New Wave, Varda was JR’s age, 33, when she made her existentialist film Cleo from 5 to 7 in which the audience follows an attractive pop star as she waits for the results of a medical autopsy. The story is shot almost in real time as Cleo has to pass the time between 5:00pm and 6:30pm awaiting the results, and the film is 90 minutes.

death and the passage of time are still on Varda’s mind and nowhere as sadly as when the pair pays a visit to Jean-Luc Godard whom Varda – (and her late husband, the director Jacques Demy) – knew well, but had not seen in ages. Godard is not the type to send catch-up postcards, although Varda prides herself on persuading him to remove his sun glasses – her only known pet peeve).

Death, or at least nostalgia, is on Varda’s mind, too, as she revels in the coincidence of returning to Charence, the last home of her now deceased friend, the lawyer/writer Natalie Surraute. 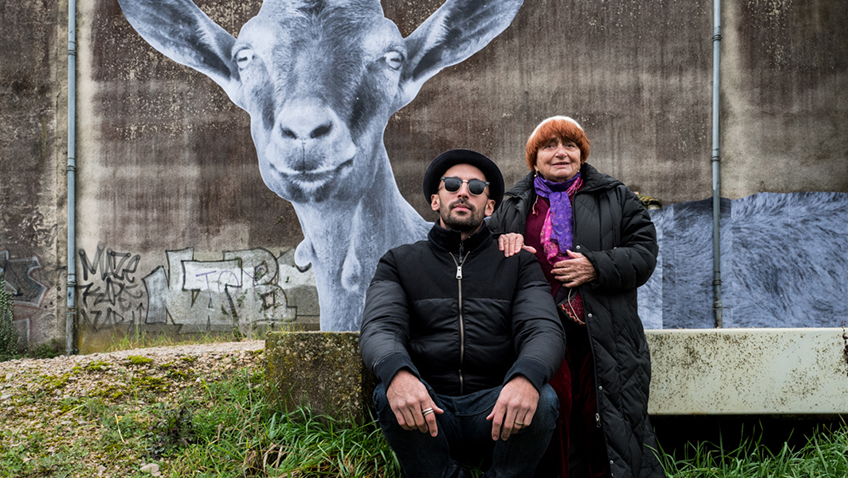 An imposing, larger-than-life portrait of a technology- minded farmer in Charence who picked up JR hitch-hiking is glued to the side of his barn turning the farmer (who works 4,000 acres by himself) into a rural hero, while retaining his personality. As for Surraute, who was barred from practising law by the anti-Jewish Vichy regime in France and went into hiding, there is a more modest official plaque. But Surraute also lives on through her books and through Varda, whose breakthrough film Vagabond is dedicated to Surraute in the credits.

The almost poetic links between past and present continue, for Vagabond, one of the great, early feminist films from 1984, is not only about an untimely death, but is a kind of road movie about a female drifter, a bit like Varda herself albeit in this more upbeat road movie.

For overwhelmingly, the focus of Faces Places

is on life; and the unlikely duo discovers life brimming over with down-to-earth people who are a joy to be around. Even a police officer is won over by the enterprising filmmakers when he is duty-bound to warn JR that a permit is needed for his scaffolding. ‘Send any and all fines to Agnès Varda,’ JR jokes, and after more banter, the star-struck cop concedes, ‘Ok. Everything is negotiable.’ 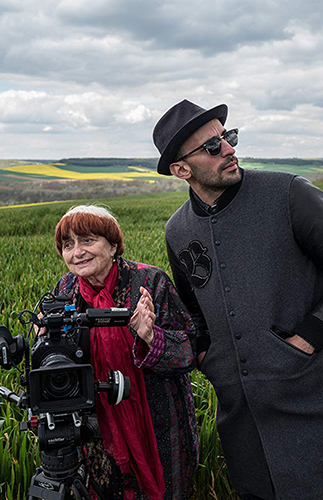 Varda and JR, so different in their physical appearance, are kindred spirits and great collaborators JR is young, bearded, tall and thin and dresses in a leather coat, big hat and dark shades permanently glued to his face, that remind Varda of Godard. The sun glasses were a constant annoyance for Varda with Godard and remain so with JR. In contrast, Varda is old, short, stocky and round, with a cap of short, straight white and brown hair sitting on her head like a mushroom. This disparity of appearance adds to the infectious good will that the pair brings with them to each village and seem to find in return.

It is not just the picturesque rural scenery and the relationship between the creative Varda and JR that make the film so charming, but the people they meet and the poignant photographic legacies they leave behind. Everyone will have their favourite encounter, but the first might be the best, artistically, and emotionally.

They travel north to a region that Varda remembers for its black slag heaps and for a collection of vintage postcards of mid 20th century miners that she had kept. There they discover a row of miners’ houses condemned for demolition and a sole resister, Jeanine. Jeanine has too many memories of life and, particularly, of her beloved miner father to abandon her childhood home. JR, who admits that he spends more time on a scaffold than taking pictures, plasters huge images of the historic miner posters on the red brick walls of the houses and they look dramatic and striking. Young girls gather for selfies with JR in front of the houses and you hope that this will ignite their curiosity about their own history.

‘We celebrated the miners and now we want to celebrate Jeanine, la resistante’, Varda tells us. A blow up of Jeanine’s face appears on the home that she is trying to save. In that face we see a determined and defiant woman and yet a sensitive and vulnerable one as well. Varda also captures Jeanine’s reaction to her image, and it is worth the price of admission just to witness it.