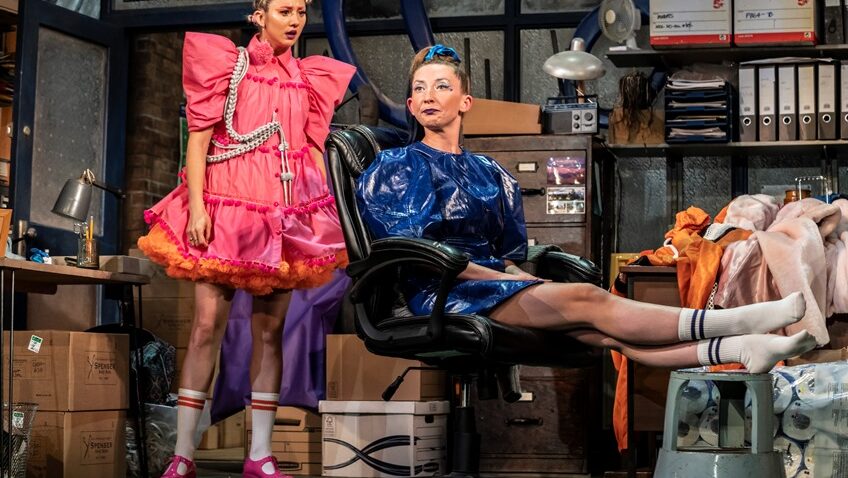 Celebrating The Crucible’s 50th anniversary with a spectacular theatrical first

The Crucible Theatre, pride of Sheffield, famous the world over, is currently celebrating “50 years of wow!” Centrepiece highlight of the ongoing anniversary celebrations is Rock, Paper, Scissors, a trilogy of plays with a unique wow factor all of their own in that, together, the three plays create a highly ambitious, brilliantly innovative, breathtaking, energising, multi-layered theatrical experience. Simultaneously, on three different stages, three interlinked stories unfold from different angles – with the same fourteen actors zipping their characters from one to the other to appear in scenes in all three, sometimes in a major role, sometimes minor. The audience, thankfully, stays put. Each play can stand alone, but seeing all three in one day certainly brings greater, rewarding depth and extra rich, cat-with-the-cream satisfaction.

Each of the (not too far-flung!) venues offers a very different stage space and ambiance. Rock takes place on the glorious expanse of The Crucible’s thrust stage, Paper next door in The Lyceum, a beautifully refurbished Victorian theatre with traditional proscenium. Scissors springs simultaneously to life in The Crucible Studio, an intimate gem of an amphitheatre, seating up to 400, which is housed inside the Grade II listed Crucible building, where the main auditorium seats nigh on a thousand people on three sides, none more than 20 metres from the action.

All three stories present the conflict, confusion and complications that arise after a traditional Sheffield scissor manufacturer dies (intestate, it seems) and his family and small workforce are at loggerheads over the future of the factory (a little a la Kinky Boots). Playwright Chris Bush is herself a native of the City of Steel and, thereby, a daughter of the City of Precision, Made-to-Last-a-Lifetime Steel Scissors. Her vibrant masterpiece, Standing at the Sky’s Edge, set in Sheffield’s famous Park Hill flats, had sensational success (and plays again next winter); now, yes, Rock, Paper, Scissors emerges triumphant, too, Scissors richly deserving its standing ovation. Again, the work is lively, beautifully enacted and full of layers of interest and intrigue.

Humour features large in all the plays, a comical ongoing farce of mistaken identities taking a prominent role, but serious themes and hobbyhorse issues feature large, too – and lots of them. From characters young, old and in the middle come different viewpoints, visions, passions, misunderstandings and vulnerabilities, influenced by their various gender partnerships, family relationships, budding romances, backgrounds, past experiences, hopes, ambitions, mental states and hidden secrets. We see how easily misconceptions and hostilities arise when individuals assume they know what another person is all about from a mere snapshot glimpse, while thick and fast come conversations on music, capitalism, altruism, obligations, on the enduring quality of craftsmanship, the life-affirming reality of manual work, the exploitation of apprentices, the ephemeral nature of the un-ownable digital components that make up a modern youngster’s life, and the destruction of climate and environment as we constantly fire up vast, energy-guzzling data banks to feed digital habits. Einstein gets plugs a-plenty for his theory of thermodynamics on the conservation and transformation of just a finite amount of energy; then there’s philosophy and Heidegger, Shakespeare and Sonnet 59, Ecclesiastes and a season for everything, plus Picasso, and the puzzle of whether metaphors really are the bee’s knees or don’t hold water at all.

In Rock, all fourteen characters appear but the main focus is on ageing rocker Susie Spenser (no, not Quatro), played admirably brash, abrasive and bulldozing – yet ultimately not hard-hearted, by Denise Black. Susie’s determined to channel her finite energies into transforming the factory site into a cathedral of Music, which she sees as her legacy to future generations. Long-standing friend Leo (Andrew MacBean) patient, understanding, staid, sensible and, as he puts it – dull, is always by her side. Actor Leo Wan wanders in to add fine humour as baffled, gauche Xander, corporate design consultant (that’s estate agent) who’s mistaken for celebrity photographer Billy, played with natural ease by Alastair Natkiel.

On The Crucible stage, Ben Stones’ set creates a vast, abandoned factory space with bulky radiators, piled-up cartons and mess below, and broken, debris-strewn, corrugated perspex roof panels above, which, everyone claims, let in a special quality of light. Surely this space is ideal for loud music, flashing lights and exhilarating, choreographed mayhem to explode on the scene! It is, and it does – more than once, and to dazzling, uplifting effect. But, as in all the plays, quiet, wordy scenes with extended dialogues also take place. Sometimes we do feel we’re treading the same water but the logistics of other characters being on other stages probably require it.

In The Lyceum, Paper is set in the office of unsmiling manager and former Canary Wharf wealth-maker Omar (Guy Rhys) who daren’t face up to the truth. Janet Bird’s fabulous set has his office stuffed with a typical, profuse clutter of decades past, an authentic jumble of boxes, box files, loo-rolls, lamps, hoover and discarded bric-a-brac that almost buries the desks. Wonderfully, sheets of paperwork dangle, twirling to infinity and beyond through the space above the set. With physical action restricted somewhat, but by no means entirely, it’s more words and papers than dance and song, though the bickering pop duo CocodaMol (not to be confused with CalPol or ParacetoMol) do turn up, and Coco and Molly, played admirably ostentatious and over-the-top by Chanel Waddock and Daisy May, reveal more of themselves. In this play, though, the main focus is on lesbian pair, Faye (Samantha Power) the deceased’s indecisive step-daughter, and her deceptively efficient, organised, decisive partner, Mel (Natalie Casey), whose vision is to sell the site for housing and ensure a secure future for their children. The two were superficially glimpsed in Rock but now a deeper insight into their minds and souls shows they’re not actually as they seemed at first glance. We learn more, too, of manager Omar’s PhD daughter Zara (Lucie Shorthouse) who sorts out the company’s IT for free, and who sings magnificently in Rock.

In the Crucible Studio amphitheatre, Natasha Jenkins’evocative set for Scissors has us nestling inside a small-scale scissor factory workshop, where the 4 remaining, ill-paid, young apprentices work at old-fashioned wooden workstations, using old-style paraphernalia and machinery (that actually works!) as they assemble, sharpen, polish and check the precision of their hand-crafted scissors (smaller pairs, rather than the larger, heavier ones that used to be more prevalent.) They don’t want the factory to close.

Making full use of this intimate space, plus the steps, aisles and chairs between and beside audience members, the young actors give superb performances, their characters as real as the delicious, authentic smell emanating from the sharpening wheel as sparks fly and metal gets hot. The feisty dynamism and passion of Ava (Dumile Sabana) and Liv (Maia Tamrakar) – Ava’s tempered with coyness – are wonderful to behold. Every interaction of these two and of/with the two young men is magnificent (though liberally embellished with “f” words). Eventually, secrets well hidden beneath the surface erupt to take us all by surprise; even calm, well-behaved Trent (Joe Usher) is suppressing something; so is surly, paranoid, brittle, scathing, humourless and utterly unpleasant Mason, a fabulous persona created by Jabez Sykes (a rough diamond with the comic brilliance of Mackenzie Crook’s Gareth in The Office). A spontaneous standing ovation is reward for the buzzing energy and superbly moving emotional involvement they engender.

Sheffield Theatres form the largest regional theatre complex outside London, and they’ve won Regional Theatre of the Year awards four times. The melting-pot of The Crucible, especially, lends dazzling versatility and grandeur to all genres of drama or musical as well as being internationally revered, of course, as the tip-tap-top venue for the World Snooker Championships. The stunning production of The Life of Pi alone took 4 UK theatre awards. Maybe the theatrical first of Rock, Paper, Scissors will bump up the tally.

Full of dynamism, warmth, humour, interest, intrigue and splendid all-round acting, this admirable, exhilarating creation is no mere gimmick. It works magnificently well – and in triplicate.

The show continues until July 2nd.