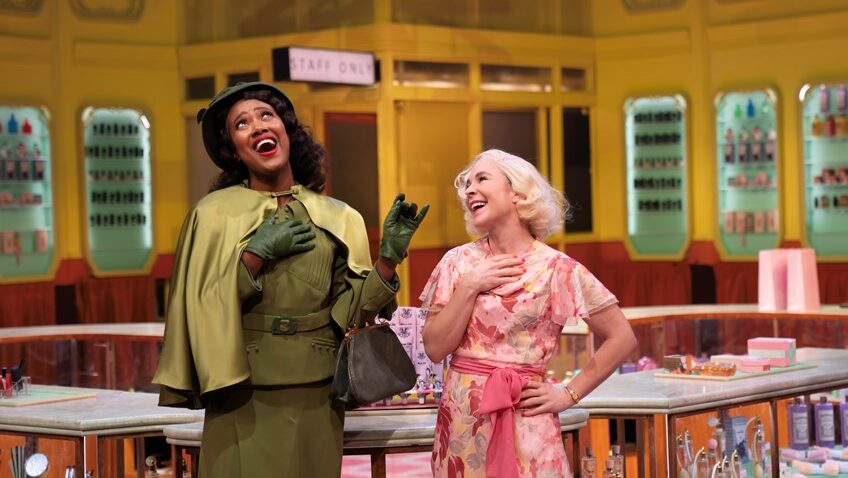 The big Christmas musical at The Crucible this year is She Loves Me. The show’s title song was a big hit for Jack Jones in 1964, but it’s likely this is the only one of the show’s numerous chirpy, breezy, upbeat numbers that might ring a bell with anyone.

The story, set in the 1930s, is one of various adaptations of the 1937 play Parfumerie by Hungarian Miklos Laszlo. But, while the play focused on the fortunes of Mr Maraczek the owner of the Parfumerie store, the 1940 Jimmy Stewart film The Shop Around The Corner, the 1998 Tom Hanks You’ve Got Mail movie, and the 1960’s musical and subsequent revivals all focus on the romantic comedy of two bickering co-workers, each of whom falls in love with their Lonely Hearts pen-pal, who, lo and behold, turns out to be… well, yes. The plotline is certainly undemanding, but it’s all very polished, pleasant, charming and cheery.

Alex Young (who reckons The Crucible is “the best stage in the country” and “Sheffield audiences are nicest”) plays and sings shop worker Amalia Balash with engaging vivacity and fine voice as she bickers with fellow sales clerk Georg Novack (David Thaxton). The chirpy, quirky songs by Fiddler on The Roof songwriters Sheldon Hamick and Jerry Bock carry the characters and story along, elaborating on their deeper thoughts and emotions, rather than creating big song numbers for the sake of it. All the same, greater onstage chemistry between Amalia and Georg would help us buy more wholeheartedly into their relationship and its development, while more sleaze and arrogance, or suaveness, from Steven Kodaly (Andy Coxon) would be a bonus, too. There’s special applause for Kaisa Hammarlund as Kodaly’s strung-along girlfriend Ilona Ritter, giddy but sincere and likeable, while Marc Elliot’s Sipos is an amiable, besuited, bespectacled chap in a nice, quiet way, and Lewis Cornay fairly bursts with enthusiasm as bike-proud delivery boy Arpad in Fairisle pullover, who aspires to being an elegant, well dressed sales clerk like the rest, in the days when assisting well-off customers in choosing lipstick, soap, shampoo, perfume and vanishing cream was a crucial job and one to be proud of. Karl Seth brings us worthy, loyal, though beleaguered, store owner Maraczek while ensemble players fill the stage with bustling shoppers and punters for all occasions, as in the Twelve Days of Christmas shopping rush with its finely choreographed parcel tossing all around the counters.

All the comedy and light humour go down a treat, the scene at the Cafe Imperiale proving a particular hit. Adele Anderson (one fascinating third of the fabulous Fascinating Aida trio) is masterful as the stern and funny Maitre D’, delivering A Romantic Atmosphere wonderfully, interspersed with the clandestine antics and acrobatics of the ensemble.

On Ben Stones’ masterpiece set, the sides of the pink and yellow Parfumerie building run in perfect-perspective beauty down the two streets that lead from the elegant architecture of the corner entrance. All turns inside out with admirable, smooth ease to take us inside the shop, bedecked with beautiful cabinets, and display counters that are just asking to be sung and danced upon. The revolving stage circle – hoorah! – also plays its part.

Since it’s two and three quarter hours long, those who prefer wham-bam! might find the show, and Joe Masteroff’s book, a bit on the samey, slow side at times with somewhat of a fizzle at the end, but it’s a show with heaps of beauty, charm, elegance and appeal, with plenty of clever touches and highlight moments, with warm, intimate characters, and songs full of variety and quirky interest (Where’s My Shoe? Vanilla Ice Cream, A Trip to the Library). It’s all delightfully light and relaxing.