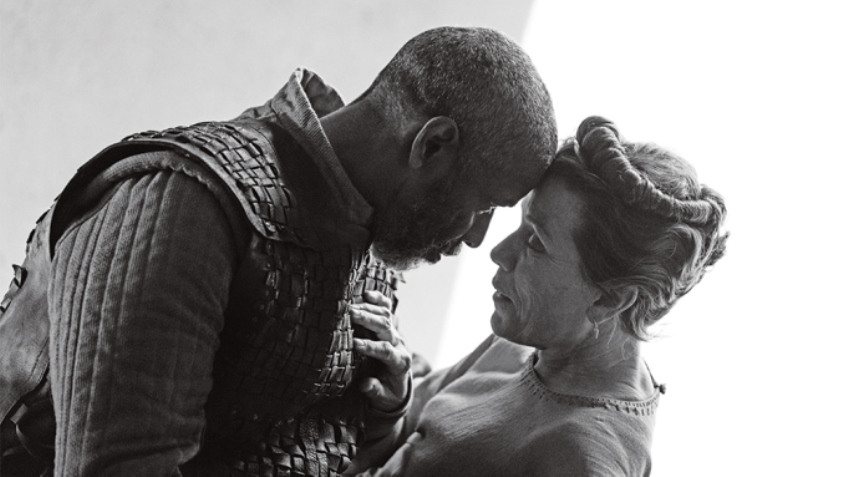 Joel Coen, the other half of the Coen brothers (Inside Llewyn Davis,No Country for Old Men, Barton Fink, Fargo) is 67 and has just gone solo. He has sole credit as screenplay writer and director for a surprising choice for a “Coen” film, particularly as it is based on an early 17th century play. With one caveat, this thrilling production of Shakespeare’s Macbeth, running at a pared down 105 minutes, is among the best we’ve seen. The Tragedy of Macbeth should be seen on the big screen in cinemas to get the full immersive experience Coen intended.

Macbeth must be the most adapted play in history, if we include the reimagined versions, such as Kurosawa’s 1957 Throne of Blood or Billy Morrissette’s Scotland, PA, set in a 1970’s American suburbia. The last screen version was Justin Kurzel’s 2015 Macbeth, a wild, visceral film about a serial killer (Kurzel’s speciality) on the loose on location in windswept Northumberland and on the soggy Scottish moors.

By contrast Joel Coen’s film is shot on Los Angeles sound stages. At times a fortress, at others Macbeth’s surreal, minimalist castle is a light, ephemeral construct of sharp angles, walls that open to the elements, a courtyard that fills with liquid like a cauldron, and surfaces that shift as the Macbeths lose touch with reality. The “outdoor” scenes, too, have the stylised look of a Fritz Lang movie and while no attempt is made to hide the fact that the barren, dark, foreboding landscape is a sound studio, the atmosphere is haunting and real.

These moody sets are shot in a rich monochrome by the French cinematographer Bruno Delbonnel, who captured early 1960s New York City in Inside Llewyn Davis and 1940’s London in Joe Wright’s Darkest Hour. Delbonnel’s lighting and square, claustrophobic aspect ratio, coupled with unusual camera angles turn Stefan Dechant’s sets into an ominous and supernatural, 11th century purgatory. In this chilling landscape every character, from the terrifying avian “witches” to Corey Hawkins’ heart-broken – and heart-breaking – Macduff stands out.

Cohen has such a command of the play that he does not apologise for casting 66-year-old Denzel Washington in the title role, or his (Coen’s) wife, Frances McDormand, as Lady Macbeth. At 64 she is the oldest Lady Macbeth on record and a bold choice in a story that is all about heirs to the throne. Whereas babies were everywhere in Kurzel’s Macbeth, Coen’s Lady M is well beyond childbearing age. Oddly enough, the couple’s advanced age adds to the drama. As suggested in the play, this couple will be childless, so power is now – or never.

It is as though the three-times Academy Award winning McDormand has earned the right to play this coveted role, just as 82-year-old Ian McKellen played Hamlet last autumn on stage in Kingston. And McDormand does not disappoint. We feel Lady M’s ambition waning when she realises guilt has destroyed any enjoyment of their hard-won power and respect. She spends the aftermath of King Duncan’s murder doing damage control. Macbeth’s obsessions separate the close pair, and Lady M, alone with her bloody hands, goes very convincingly insane. McDormand overshadows Washington who bares his soul with gut-wrenching intensity but struggles to make all his lines sing – or sting.

As impressive as the acting, is the imaginative way Coen uses the “weird sisters” (all three played by the physical performance artist and theatre director, Kathryn Hunter – the first woman to play King Lear). The witch, as it were, is a grotesque, contorted hag, whose limbs look like the bones of the dead. Coen combines the play’s abundant bird imagery, wrapped in superstitious symbolism, with the witches, who shapeshift into actual birds at key moments in the story. In one terrifying scene they are seen in their barely human form perching like vultures on the rafters of the now roofless courtyard watching Macbeth, their prey, below.

If Coen does not develop the ambiguous character of the First Murderer, he does wonders with his interpretation of Ross. In most productions, Ross’s main function as a Scottish nobleman is to pass on information to the major characters. Brilliantly played by Alex Hassell, Ross, though devoted to Duncan, is an apologist for the newly crowned Macbeth’s odd behaviour at the banquet (where Macbeth sees Banquo’s ghost.) Ross’s moral code, sound instinct and the knowledge he gains from his messenger role combine to convince him that the unthinkable is true.

Even before he has changed sides, (this is Coen’s invention), Ross hides Banquo’s son after Macbeth orders Banquo (Bertie Carve, excellent) and his heir killed. Ross tries to comfort his cousin, Lady Macduff (Moses Ingram) rationalising her husband’s decision to flee to England without his family. Then he has the painful task of breaking the tragic news to Macduff and Duncan’s son Malcolm (Harry Melling) in exile. Most surprising is that Coen gives the mysterious Third Murderer an identity, and an unexpected one in the monk-like Ross. By the time Ross appears, heroic on a steed in the final scene (another Coen invention) he has stolen the film.

The major caveat is that the title of the film is The Tragedy of Macbeth, but we have another serial killer (though more sympathetic than Kurzel’s), rather than a tragic hero. Macbeth is classified as a tragedy like Lear, Hamlet and Othello, and not as a history play like Richard III. In Macbeth Shakespeare has given himself (and the actor who portrays Macbeth), the toughest of jobs: to portray a ruthless murderer on the one hand and a flawed hero who must win our sympathy on the other. Shakespeare structures the play so carefully that the balance is easily upset.

Here is a career soldier who is honourable in battle and refuses to fight with Macduff (‘but get thee back, my soul is too much charg’d /With blood of thine already). Yet he is praised by King Duncan (Brendan Gleeson) for his bloodthirsty acts on the battlefield and cannot adapt to “peace”. In the play, unlike in the film, most of the bloodshed either takes place off stage or is done by others, not Macbeth. After each murder is an anguished soliloquy in which Macbeth convinces us he has a moral compass and makes us share his pain when he gets lost. Coen’s Macbeth has too much blood on his hands for us to lament his death as we do Hamlet’s.