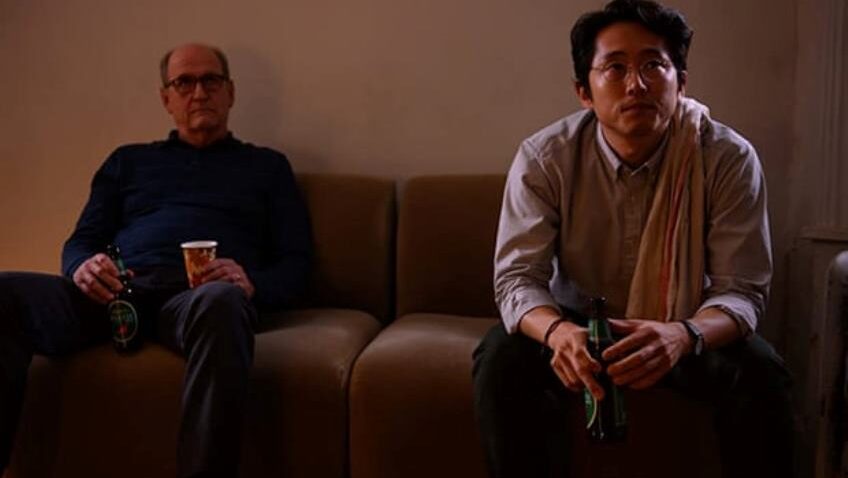 Stephen Karam brings his brilliant play to the screen, with mixed results.

Three generations of a lower middle class, American, Christian family from Scranton, Pennsylvania, gather for Thanksgiving in the newly-rented Manhattan apartment of younger daughter Brigid Blake (Beanie Feldstein, Ladybird) and her boyfriend Richard (Steven Yeun, from Minari). Mother Deidre Blake (Jayne Houdyshell), father Erik Blake (Richard Jenkins, The Shape of Water) and gay, older sister Aimee (Amy Schumer, Trainwreck) take turns wheeling around Momo (June Squibb, Nebraska) who has dementia. It might sound like the setting of a US sitcom, but the reason for the 15 rating is “strong threat”.

There is no gun, no physical violence or child abuse, no shouting, and no burglars, but there is a kind of home invasion both physical and psychological. The brilliance and originality of Stephen Karam’s play – directed on Broadway and at the Hampstead Theatre, London in 2018 by Joe Mantello – is that the “strong threat” is existential. In the theatre it spread from the stage to engulf the audience, but this is, sadly, not the case with the film.

The Manhattan apartment might be a duplex, but it is dilapidated (in the film the shoddy state is exaggerated with a rusty, unsanitary bathroom and a dirty mattress on the floor which constitutes the bedroom). The ground floor is a good size, open plan kitchen living/dining room but there are no windows. The bathroom and bedroom are accessed by a spiral staircase off the dining area. Upstairs, a window looks out into a dark, inner courtyard where the rubbish is. If you lean toward the window, you can get a phone signal. Outside is Chinatown, but you get no sense of being in New York as the window has no view and we never leave the apartment.

While the parents get the grand tour (and figure out how to get Momo’s wheelchair upstairs by a creaky lift), Richard is cooking turkey dinner using paper cups and plates. By the time dessert is served, no one has much appetite for the various cheap alternatives to the traditional pecan, apple or pumpkin pie. But sitting alone at the table, tempted to break the diet she will never stick to, Deidre is fighting back pent-up tears. Houdyshell is the only member of the original stage cast to make it to the screen and she and Jenkins (this is his kind of role) are the stand outs.

Modest gifts appear and when the light circuit breaks, a gift of candles comes in handy. As the familiar dinner ritual begins, we, and the characters, pick up the family news from various conversations. Aimee, a lawyer with relationship, health – and, it is revealed, employment issues, and Brigid, an artist, enjoy sisterly talk, but their conversation is muffled by Feldstein’s’ poor enunciation and actresses whispering

Erik, a maintenance supervisor in a girls’ school and Deirdre (an office worker who is continually passed over for a raise or promotion) are, for a reason we learn at the end, putting on brave faces. Erik and Richard (a mature student) chat in the kitchen over wine and an almost unrecognisable Amy Schumer as the sympathetic Aimee, has an awkward conversation on the phone with her ex-lover, which her father overhears.

To reveal the nature of the disclosures in these conversations would be to ruin the very delicate delivery of that “strong threat” which is one way in which Karam transforms the familiar into the uncanny. Another way is the geography of the apartment and the third is the supernatural element, which Brigid explains away as an elderly Chinese woman who lives on the floor above and makes a lot of noise.

In the film version the supernatural element is prominent to the extent that the clattering we hear results in the clichéd jumps in a horror movie. In the cinema, people giggled with the jumps, whereas in the theatre, the noise was more ambiguous and silencing.

This heavy-handedness is a problem with the film version, in which Karam makes his directorial debut while adapting his own tricky play for the screen for the first time.

In the theatre we see the entire apartment (except the inside of the bathroom if the door is closed) at all times, as well as a side door corridor that leads out to the street. This is important because our eyes and imaginations are allowed to wander into the spaces that are sometimes filled, sometimes dark, sometimes empty but with the possibility of being occupied at any moment. This uncertainty produces an ominous, effect on the audience without the histrionics that Karam employs in the film.

By contrast, in the film Karam is continually setting up the camera in different corners of the apartment to direct our gaze, and what we hear clearly. Sometimes we are in the room around the table with the family; at others we are listening through a part open door from another room. In one key conversation, Richard (who was Middle Eastern in the original and is now Asian) has his back to us in another room when he is talking about his boyhood addiction to Sci-fi comic books. In this dialogue he reveals the meaning of the title but consider yourself fortunate if you hear it.

This post 9/11 Manhattan play is about more than the insecurity ordinary people feel when their sense of security proves false. It is about the moment when you are in freefall without the safety net you – and those who depend on you – took for granted. It is about how a familiar family gathering can, within a few hours, shake you to the core. Karam’s direct inspiration was Sigmund Freud’s essay Das Unheimliche or The Uncanny.

Whether it is the film medium or the clumsy direction, The Humans fails to produce the disorientation of existential angst that is meant to emerge from an ironically named Thanksgiving holiday. It was with an increasing sense of unease that I watched – transfixed – the pre-pandemic play and emerged haunted by a malaise that endured for months, but was not revived or recreated in the screen adaptation