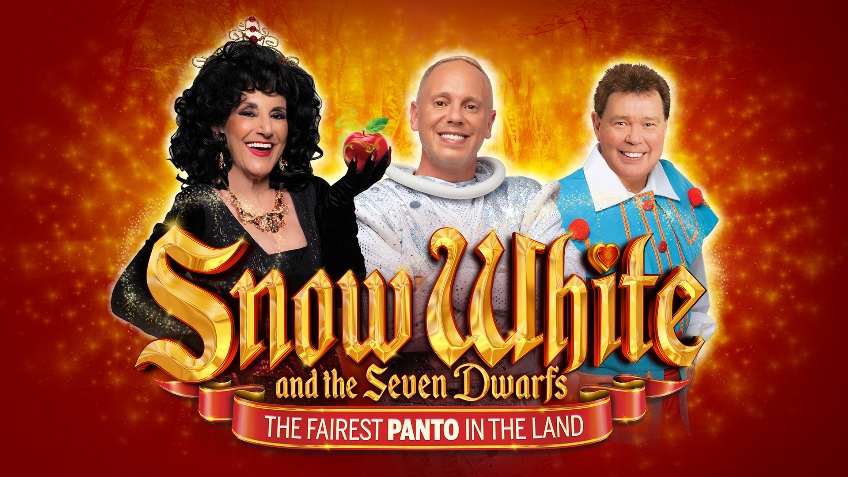 And with it you can feel the huge outpouring of relief at panto’s return to stages across the country this year following the fallow 2020 season when theatres were shuttered because of coronavirus.

A chilly, windy night in December in Bristol as Storm Barra receded saw a buzz of anticipation and excitement as this year’s festive offering approached and a packed crowd at The Hippodrome were certainly ready and waiting.

They were there to see The Fairest Panto In The Land, Snow White and the Seven Dwarfs which this year starred Lesley Joseph as Queen Dragonella and Rob Rinder as The Man In The Mirror. We all know the story of Snow White, after all its one of the classic pantomimes, although this one comes with a twist. No spoilers here, if you want to find out what it is then you need to go and see the show.

And what great fun it was as well. From the opening scene where the seven dwarfs shuffled onto the stage to the last, The Royal Wedding, the performance was a delight, so much so that it was a shame it had to end.

As always with pantos at The Hippodrome, special mention should go to the costumes, they seemed even more glamorous than ever this year, whilst the music and the spectacular stage set were both memorable – the appearance of the dragon will certainly remain in the memory of many of the children there to see it!

But as always, the real stars were the performers especially Andy Ford as Muddles who knitted the whole performance together playing the comic fool with aplomb. Queen Dragonella was as evil as you would expect whilst Rob Rinder, a little reserved to start with, grew into his performance as the show, and his confidence visibly increased.

Let’s not forget Princess Snow White herself (Charlotte Hains) and Prince Harry of Hengrove (Dale Mathurin) who both put in good performances ably supported by the rest of the cast and ensemble.

There were plenty of laughs along the way, but perhaps the best compliment I can give the show was the fact that for two hours you were transported back to pantoland, and that is something that all theatre lovers will welcome – after all in these difficult times to lose yourself in a fantasy land for a short period of time is a fantastic escape.

It’s great to have panto back and you should go and see it – take your grandkids and transport yourself and them to The Forbidden Forest for a while – you won’t regret it!

Snow White and the Seven Dwarfs is at Bristol Hippodrome until Sunday 02 January 2022. For tickets follow this link.